'Boston a race like any other despite tough course,' says Cherono 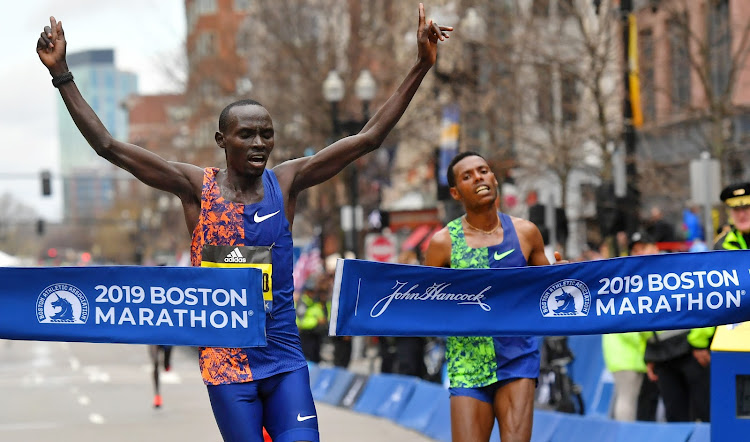 Kenya's Lawrence Cherono crosses the finish line ahead of Lelisa Desisa of Ethiopia during the 123rd Boston Marathon in 2019
Image: REUTERS

The 2019 Boston Marathon champion Lawrence Cherono says he is not worried about the tough course in the American city ahead of Monday's race.

Cherono, who timed 2:07:57 to beat the tape three years ago, said he has been training as usual with minimal worries over what awaits him.

"It has been a preparation like I have always done and not because the Boston course is tough. I have not done anything special in training to overcome the course. I treat every race with the seriousness it deserves," the two-time Amsterdam Marathon champion said.

However, Cherono is careful not to pick out any particular threat from among his competitors, preferring to remain modest in his expectations.

"Everyone is a tough opponent...it would be unfair to label others as a bigger threat than the rest. Even a debutant is a favourite. The secret is to plan strategically for your race rather than worrying about what your competitors will do," he said.

The 2019 Chicago Marathon champion added: "Boston is a big race and anyone invited to compete has to be a good runner. All of us are equal and it would be catastrophic to underrate anyone."

Cherono's in-tray for 2022 also includes an appearance at the World Championship in Oregon, where he will lead the men's marathon team, alongside Kamworor, Barnabas Kiptum with Kirui as stand-by.

Nonetheless, Cherono says it is too early to start talking about strategies to win gold in the homeland of American athletics.

"We will cross that bridge when we get there. The focus, for now, is on Boston after which we will start preparing for the World Championship. It is all about planning strategically," he said.

Cherono, who timed 2:03:04 at the 2020 Valencia Marathon champion to become the eighth fastest marathoner, has been billed as one of world record holder Eliud Kipchoge's heir-apparent.

However, the 2016 Prague Marathon champion said this is not cast in stone.  "I don't think so (inheriting Kipchoge's mantle). There are so many talented athletes who may rise up to match up to his feats. Marathon is quite an unpredictable race and a lot can change in a few years as far as the leading athletes are concerned," the 2020 Valencia Marathon champion said.

He added: "I just try to enjoy every race, pick lessons from it and move on to the next one. There's the Shanghai Marathon in 2016 where I finished seventh but enjoyed it regardless."

The two-time New York City Marathon champion will be making his debut on the streets of Boston on April 18 seeking to add to his burgeoning accolades ...
Sports
6 months ago

The 2019 Boston Marathon champion's race seemed an ode to the City of Arts and Science as he bounced back from a disappointing outing at the Tokyo ...
Sports
9 months ago

The 2019 Chicago Marathon champion Lawrence Cherono says many parents sink a lot of money in funding their children's young careers to no avail.
Sports
10 months ago
Post a comment
WATCH: The latest videos from the Star
by OMONDI ONYATTA
Athletics
15 April 2022 - 00:00
Read The E-Paper