Chepngetich in seventh heaven after victory in Nagoya

Although she did not set a new personal best, everything else went according to plan for the two-time Istanbul Marathon champion

•It was redemption for her previous outing in Japan when she dropped out of the women's marathon at Tokyo Olympics.

•At the Gent Half Marathon in Belgium, Kenya's Viola Chepngeno also led a 1-2 Kenyan finish. 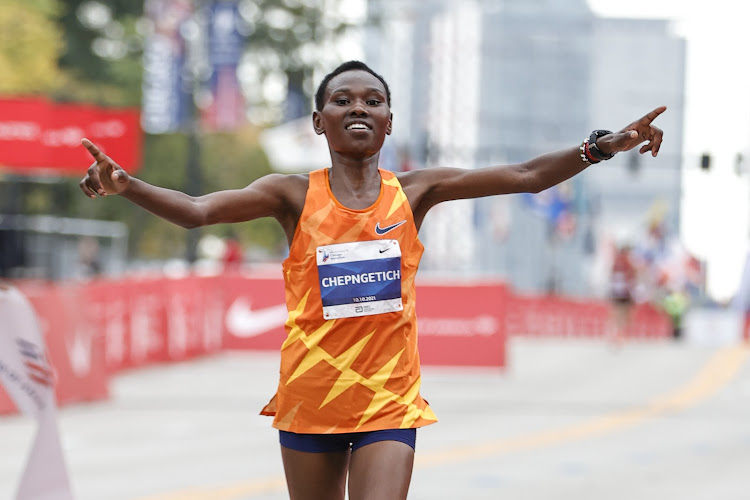 With approximately Sh28 million ($250,000) after her win at the Nagoya Women's Marathon on Sunday, world champion Ruth Chepngetich could not help but pay homage to the city for its amazing atmosphere.

The prize money is the biggest ever awarded to a marathon winner in history.

"Thank you, Nagoya for a day to remember. Amazing race today and a result that I am proud of: 2:17:18, the second-fastest time ever in a women's only marathon," the half marathon world record holder said.

Although she did not set a new personal best to beat the 2:17:08 she timed at the Dubai Marathon in 2019, everything else went according to plans for the two-time Istanbul Marathon champion.

She ran a dominant race that has become her characteristic — peeling away from other competitors during which she had timed 1:09:03 at the halfway mark.

Despite the 2020 champion Salpeter catching up with her, the ruthless Chepngetich seemed determined to add another accolade to her medal collection.

It was redemption for her previous outing in Japan when she dropped out of the women's marathon at the 2020 Tokyo Olympics in Sapporo. Having also won the Chicago Marathon in October last year, her Olympics disappointment now seems like a blip.

"I chose (to run) the Nagoya Women’s Marathon because Japan is a nice place. The environment is good, and as women, we have to encourage ourselves and do better," Chepngetich said.

Chepngetich claims the largest first-place prize money in the world of marathon running: US$250,000.
Sports
10 months ago

Chepng'etich to fight for highest ever marathon prize in Japan

Nagoya represents a chance for redemption after her Olympics disappointment and an opportunity to extend her ruthless performance from October's ...
Sports
11 months ago

The world marathon champion was all smiles as she cut the tape in the windy city for a first win in a World Marathon Majors in her athletics career.
Sports
1 year ago
Post a comment
by OMONDI ONYATTA
Athletics
15 March 2022 - 05:00
Read The E-Paper