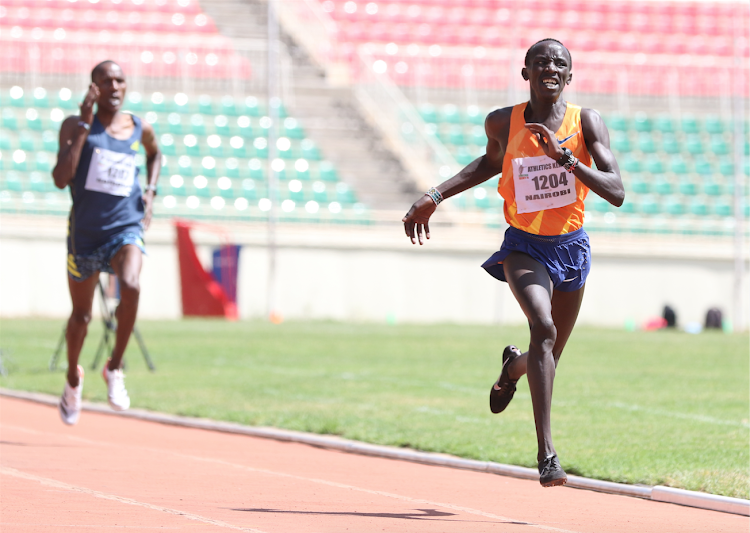 Emmanuel Kiplagat on his way to victory in the men's 10,000m at the third AK track and field weekend meeting at Nyayo Stadium
Image: ERICK BARASA

Africa Under 18 3,000m champion Emmanuel Kiplagat believes Kenya can end their curse in the men's 10,000m if only there is teamwork amongst those selected for international assignments.

Kiplagat alleged that Kenyan athletes are usually beholden to their athletics camps and hence do not want to work together at international races.

"If you look at the Ethiopians and Ugandans, you will see that they receive a lot of assistance compared to our athletes. There is usually some form of unity among them regardless of which athletics company or management they belong to," Kiplagat said.

He also called for proper support for athletes to ensure they can concentrate on perfecting their skills rather than worrying about training facilities and kit.

"Once we are provided with running shoes and kit on time, then we will be able to concentrate on reclaiming our dominance in the 10,000m. It's been a long time coming for Kenya to start shining in this long distance race," Kiplagat said.

The Baringo native, who has recently transitioned to the senior ranks, was one of the biggest winners at Saturday's third Athletics Kenya track and field weekend meeting at Nyayo Stadium after clinching the men's 10,000m.

The World Under 20 Championship trialist was, however, not fully satisfied with the result.

"I have just transitioned into the senior ranks and my expectation is to do well. Today was a tough race considering the hot weather. I had expected to clock 27 minutes but I couldn't and that's a bit disappointing. All in all, I thank God for the victory," he said.

Kiplagat believes he must improve on his speed if he is to realise his dream of donning the Team Kenya singlet at this year's Commonwealth Games in Birmingham.

"I still need to work on that because I've seen that my speed is still below par. My target is the Commonwealth but as I like to say, aim at the stars and fall on the moon...if Birmingham is a stretch too far then I would love a chance at the World Championship in Oregon," Kiplagat, who trains under coach Barnaba Kitilit, said.

AK Nyanza North chair Joseph Ochieng is hopeful that the football-mad region will come to embrace athletics as more of such events are held in the ...
Sports
7 months ago

Chelangat ready to suffer physically in search for perfection

The CMCM Indoor Meeting 1500m champion has been working hard in the gym and plans to compete in the 5000m at the next weekend meeting in Kisumu
Sports
7 months ago
Post a comment
WATCH: The latest videos from the Star
by OMONDI ONYATTA
Athletics
07 March 2022 - 05:00
Read The E-Paper