The Olympic marathon champion walked home with a LG Artificial Intelligence washing machine worth Ksh92,000 and a glittering trophy 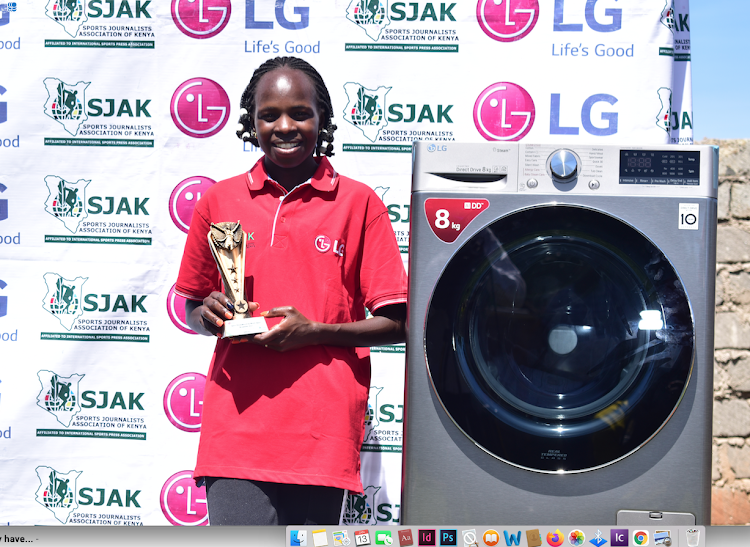 Gold medallist Peris Jepchirchir proudly displays her pesonalised trophy and the LG washing machine she won at the SJAK-LG Sports Personality for the month of November.
Image: COURTESY

Olympic marathon champion Peres Jepchirchir may need to expand her trophy cabinet to accommodate her burgeoning collection after she was named the LG Sports Journalists Association of Kenya (SJAK) Sports Personality for the month of November.

The world half marathon champion was feted for a fruitful month during which she bagged the New York Marathon title on her debut, timing 2:22:39 ahead of fellow countrywoman Viola Lagat.

“I am so happy to be recognized by LG, I feel so honoured, this is a big inspiration to me ahead of the busy season. I have started preparations for Boston Marathon, I know it is a tough course and race but I will do my best to be on the podium," she said.

The award comes approximately a month after President Uhuru Kenyatta conferred on her the Order of the Grand Warrior (OGW) award on Jamhuri Day, alongside double Olympic 1500m champion Faith Kipyegon.

OGW is a national award given to countrymen and women who have performed exemplary and selflessly to bring glory to Kenya at an international level.

For the LG/SJAK award, the 2020 Prague Half Marathon champion walked home with an LG Artificial Intelligence washing machine worth Ksh92,000 and a glittering trophy.

Commenting on the outpouring of awards, Jepchirchir said the accolades have motivated her ahead of her busy athletics calendar.

"I am so happy. I was even thinking of buying a washing machine, and here it has come. This washing machine has come in handy and I thank LG and SJAK for that," she said.

"We congratulate Jepchirchir and wish her well in future endeavors. I salute her for the achievements and making Kenya proud. The award celebrates talented Kenyan sportsmen and women for their accomplishments. This is an initiative of LG in East Africa in partnership with SJAK," she said.