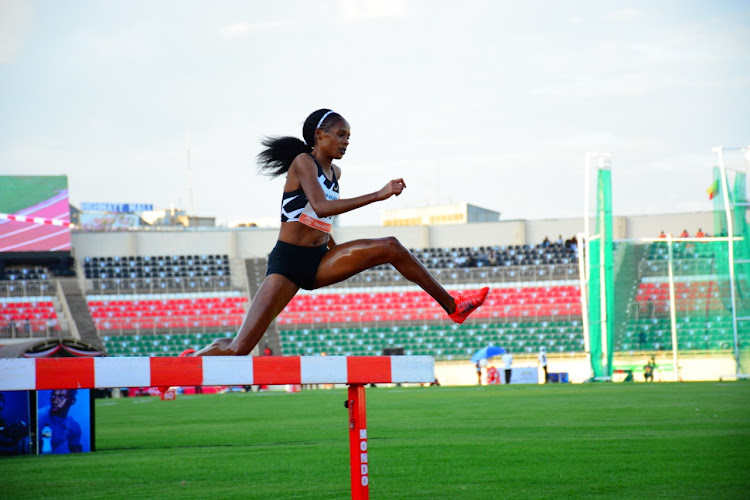 Beatrice Chepkoech clears the hurdle in a past championship.
Image: Erick Barasa

World 3,000m steeplechase champion Beatrice Chepkoech says it is important for athletes to listen to their bodies and seek immediate treatment in case of any discomfort.

The world record holder said the biggest mistake she made in 2021 was to ignore the warning signs of a nagging injury, which cost her a podium place at the Tokyo Olympics.

"Even if it is a slight injury, do not ignore it in the hope it will go away. Treat it at the earliest before it grows into something bigger. Sometimes the opportunity to compete in a big competition may seem irresistible but at the end of the day, your health matters the most," Chepkoech said.

Recounting her injury woes last year, the 2018 African 3,000m steeplechase champion bemoaned the fact that these complications surfaced a week to the national trials for the Olympics.

"It is something I first felt a week before the trials. I knew that qualifying for the Olympics would be a tall order with such an injury and so I spoke to the manager," she said.  He advised me to just compete and thereafter we would deal with it. Unfortunately, the injuries worsened during Tokyo and it is only recently that I have recovered."

Chepkoech, who clocked a new world record of 8:44.32 in Monaco in 2018, added: "In February last year, I was in peak fitness and felt on the verge of going to the next level. If the Olympics had been held a month after that, maybe I would have been lucky to break the world record once again."

At the summer games, the 2018 Commonwealth Games 1500m silver medalist timed 9:16.33 to finish a disappointing seventh.

Having overcome her injury troubles, Chepkoech says she is taking it one step at a time as she seeks to write a new chapter in her career.

"Of course, I will be very much in action this year. For now, the major focus is defending my world title in Oregon. I may choose to start with the 1500m at the African Championships as a build-up to the World Championships. As for the other competitions, we will know after consultations with my management," she said.

Chepkoech was among competitors at Friday's National Police Service Cross Country Championship at Ngong Race Course, Nairobi where she ran in the mixed relays.

She described the cross country season as the perfect chance for an athlete to shake off any jitters ahead of track and field.

"It gives one the opportunity to readjust to a competitive mood and remove any fears you may have. This season gives the chance to improve on endurance and speedwork," Chepkoech said.