• Devoted to sports from an early age, many lack the necessary education to manage their finances, the four-time New York marathon champion said, putting them at risk of being used as “cash cows” by greedy spouses.

• Those who find success quickly often struggle to cope, said Wilfred Bungei, a gold medallist in the men’s 800m race at the 2008 Beijing Olympics. 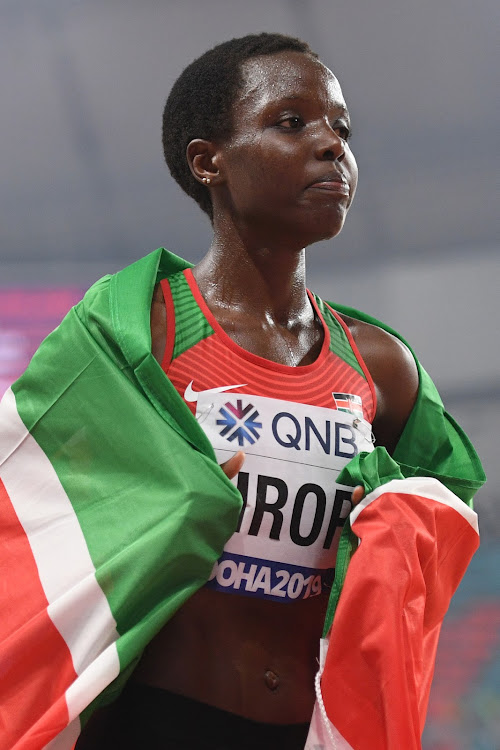 Kenya's Agnes Jebet Tirop celebrates with the national flag after finishing third in the Women's 10,000m final at the 2019 IAAF World Athletics Championships at the Khalifa International stadium in Doha on September 28, 2019
Image: AFP

The death of Kenyan running star Agnes Tirop has thrown a spotlight on the pressures faced by the country’s female athletes who pay a huge — and often tragic — price for their spectacular success in a male-dominated society.

Although their meteoric rise seemingly reflects a progressive shift in gender norms, the reality is much more grim, with young women particularly vulnerable to financial exploitation at the hands of coaches, agents and even their loved ones.

Keitany’s career exposed her to several young athletes like Tirop, who spend years balancing their demanding professional lives with social expectations around marriage and motherhood while also serving as the key breadwinner for large extended families.

Devoted to sports from an early age, many lack the necessary education to manage their finances, the four-time New York marathon champion said, putting them at risk of being used as “cash cows” by greedy spouses.

“They realise when it’s too late that their investment is not in their hands and they sink into depression,” said the recently-retired mother-of-two.

Like Tirop, who was born into a peasant family in the Rift Valley, many Kenyan athletes see sporting success as their ticket out of poverty and get their start in training camps which are unregulated and notorious hotbeds of sexual misconduct.

“There are so many wolves out there waiting to prey on these girls,” Tegla Loroupe, a former world marathon record holder, told AFP.

Agents pay off families to convince them to “force the girls to drop out of school prematurely and compete in overseas races”, the 48-year-old said.

Those who find success quickly often struggle to cope, said Wilfred Bungei, a gold medallist in the men’s 800m race at the 2008 Beijing Olympics.

“The young athletes cannot handle the fame and money that comes at their disposal so suddenly,” he told AFP, adding that many men blow their fortune on luxury cars or liquor instead of planning for the future.

Female athletes on the other hand risk being seduced into toxic relationships with predatory men, he said.

“The young girls need to be given space to grow,” said the retired runner, who now counsels troubled athletes after a bruising battle with alcoholism.

In the past Athletics Kenya has sought to protect female athletes by closing two training camps in the Rift Valley for allegedly exploiting young women.

But “Tirop’s death has been a wake-up call”, Athletics Kenya’s Dominic Ondieki told AFP, adding that the country’s sporting community needed to address the elephant in the room.

“Athletes are now opening up to reveal the challenges they are facing in their marriages... It seems most of these athletes have been suffering in silence,” he said.

“They seem to lack the decision-making power which is often left to their husbands, who take full control of the finances of the family.” 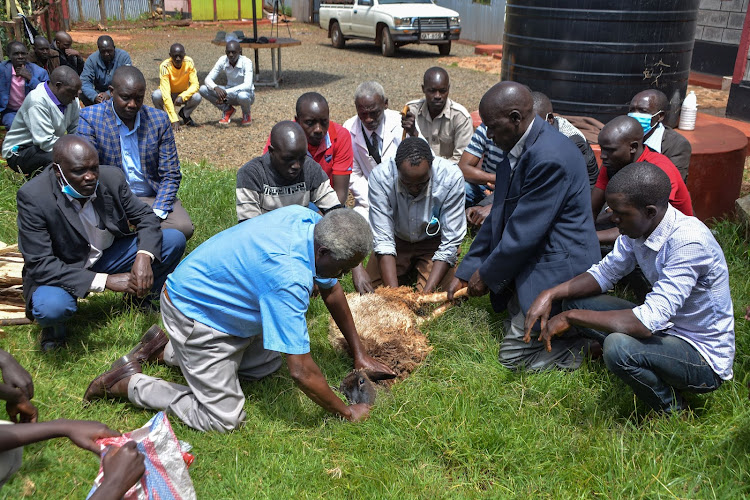 Uncles of Agnes Tirop, Kenyan distance runner who was found dead with stab wounds at home, slaughter a sheep as they perform the traditional cleansing ritual at Tirop's home in Iten on October 18
Image: AFP

In a move to address the issue, the federation is holding a workshop in early December to discuss women’s economic and social rights in marriage and other intimate relationships.

“We shall invite sports psychologists and family counsellors to come and offer their professional counselling”, Ondiek added.

Observers say much more needs to be done to support the women whose hard work has given the East African nation so much to cheer about.

With a glittering career, a family and business investments to cushion her retirement, Keitany is a rare success story on the personal and professional front.

But the 39-year-old, who only took up distance running after the birth of her first child, says the pressure for female athletes to be superwomen must stop.

“A woman athlete is expected to bear children, fight to quickly shed the weight and get back into shape and return to competition in order to bring food on the table for the whole family. Yet the men just wait and enjoy the fruits of her sweat. This should be rebuked.”