The Guilette e Romeo Half Marathon champion was a late entrant to the race in the Dutch capital after she had failed to make the start list for the Boston Marathon.

•Tanui clocked 2:17:57 to smash the course record on her way to victory

•At the 30km mark, she took control of the race, pulling ahead of the rest with an 11-second lead 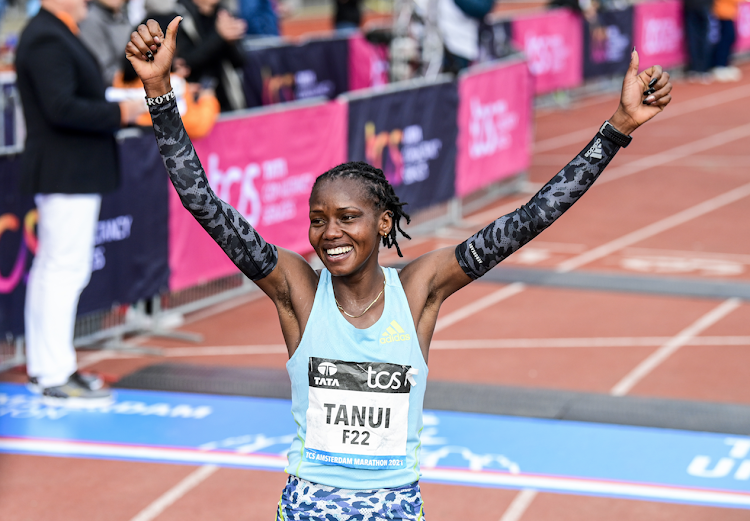 Newly-crowned Amsterdam Marathon champion Angela Tanui said she was devastated to learn of the death of World 10,000m bronze medalist Agnes Tirop and wanted to honour her with a win.

Tanui clocked 2:17:57 to smash the course record on her way to victory and went one better than her previous personal best of 2:20:08, set at the Xiamen Marathon in Siena, Italy in April this year.

"It was a terrible death and today I came here to run and win. I came and even set a course record and this mark will always be in memory that it was the day I ran in honour of Agnes Tirop," Tanui, who wore a white ribbon on her singlet in memory of the fallen athlete, said.

The Guilette e Romeo Half Marathon champion was a late entrant to the race after she had failed to make the start list for the Boston Marathon.

Although she was part of the leading pack — which included Chepkemoi, and the Ethiopian trio of Hailu, Gabiyanesh Ayele and Worknesh Alemu — Tanui seemed to biding her time for the first 30km.

From then on, she took control of the race, pulling ahead of the rest with an 11-second lead, which she held on to smash the course record previously held by Ethiopia's Degitu Azimeraw who set 2:19:26 in 2019.

It was  a different story in the men's race where Ethiopia's Tamirat Tola cut the tape in a course record of 2:03:39, ahead of Kenyan Bernard Koech (2:04:09) and fellow countryman Leul Gebresilase (2:04:07) in second and third respectively.

It was the first time in 11 years that a Kenyan has failed to win the men's race in the Dutch capital.

Overall, however, it was a productive weekend for Kenyans as other marathoners shone in other road races elsewhere.

Meanwhile, Elisha Rotich set a course record of 2:04:23 on his way to victory in the Paris Marathon as  Ethiopian Hailelmaryam Kiros (2:04:42) and another Kenyan, Hillary Kipsambu (2:04:45) finished second and third, respectively.

Ethiopian Aynalem Teferi finished third in 2:26:12 in a race held under wet conditions.

In the men's results, the fastest Kenyan was Alex Saekwo who clocked 2:10:59 to finish fifth in a race won by South African  Stephen Mokoka.