'Mr Amsterdam' Chebet out to right wrongs at Boston Marathon

•Regardless, he believes lady luck will smile on him this time round even as he puts in extra efforts in his training 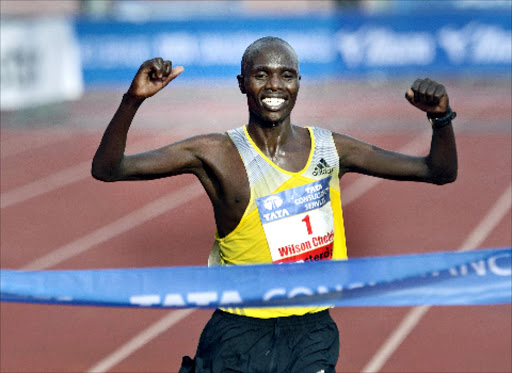 WINNER: Wilson Chebet celebrates as he crosses the finish line in a past Amsterdam race
Image: FILE

Amsterdam Marathon champion Wilson Chebet says only a podium finish at the Boston Marathon will erase the pain of 2018 when he failed to finish the race at the same venue.

Mr Amsterdam—as he is popularly known  after a hat-trick of marathon wins in the Dutch capital — was among the many runners who struggled to impress at the bad Boston weather and had to withdraw midway.

“That experience was so bad not just for me but the majority of Kenyans athletes where some finished in an ambulance. No athlete will want to compete in such weather. I hope this time, the weather will be great and favourable for us to run well,” Chebet said.

It was a rude reception for Chebet who considers Boston his second home, having competed in the American city for the last five years.

Regardless, he believes lady luck will smile on him this time round even as he puts in extra efforts in his training.

“Boston is my home and heading back to the course is advantageous because I have had five years on experience on the hilly and slopes. When I arrive at the course, I have fans who will cheer me up,” said Chebet in his training base in Kaptagat ahead of the race.

Chebet etched his name in marathon history books when he twice defended his Amsterdam Marathon title in 2012 and 2013 after winning it in 2011 in 2:05.53.