World Under 20 3000m SC champion expects the Kip Keino Classic to be his last race this year before he retreats to relax and plan for the World Championships in Oregon.

•Under the tutelage of Patrick Sang, Serem has been simply brushing up on the strategy that has so far worked for him in his young athletics career

•Despite his achievements thus far, Bakkali presents a different kind of headache to the youngster who will have to give his best to stop the Moroccan 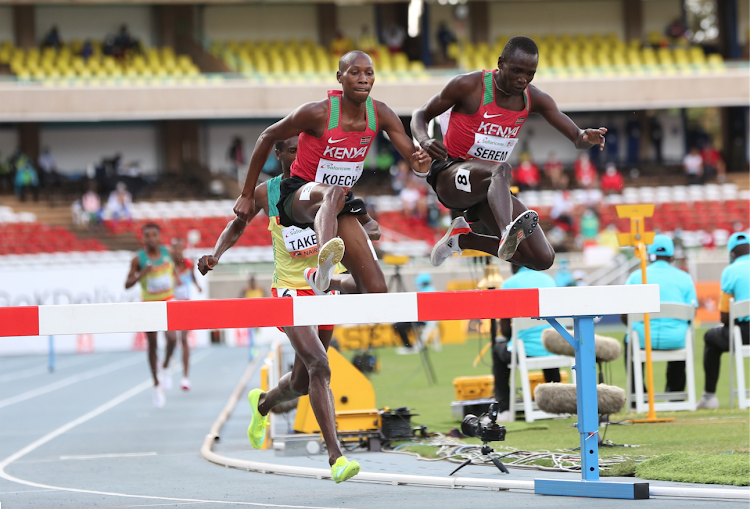 Amos Serem leads compatriot Simon Koech in the final of the men's 3000m SC during the World Under 20 Championships at Moi Stadium, Kasarani.
Image: ERICK BARASA

Serem said he has his eyes on the first place at the one-day event and has developed a strategy to ensure the Moroccan does not embarrass Kenyans on home soil by crossing the finish line first.

"It was quite painful for me personally to see him snatch the title we have held for close to 53 years. We as the Kenyan contingent know he is motivated and is coming for nothing short of victory in Nairobi. That is something we won't allow to happen because our pride is at stake," Serem said.

Soon after the World Under 20 event, the 19-year old retreated to his Kaptagat base to intensify his training ahead of the second edition of the World Athletics Continental Tour Gold.

Under the tutelage of Patrick Sang, Serem has simply been polishing up on the strategy that has so far worked for him in his young athletics career.

"The training has gone on well so far; the weather is just perfect. Nothing much has changed in terms of the training regimen we have been applying ahead of most of the races in which I have competed," the man from Kabao village in Uasin Gishu county said.

Serem added: "My running strategy has always been to be observant and identify the weak and strong points of other runners at the beginning stages of the race. Once I do that, the next step is to strike in the last lap and run away with the crown."

Despite his achievements thus far, Bakkali presents a different kind of headache to the youngster who will have to give his best to stop the Moroccan's dream of winning a race in the land of steeplechase champions.

After his win in Tokyo — a race in which Kenyan Benjamin Kigen won bronze — Bakkali was overjoyed with emotion as he recounted the many times he has longed to upstage the Kenyans for the crown.

Nonetheless, the man christened by many as the new "Ezekiel Kemboi" — due to his bullishness on the track and dance celebrations — says he is psychologically prepared for the battle on that day.

"What I have learnt is that you need to be dedicated and persistent in the pursuit of your passion regardless of the challenges. I know many people have been affected during the coronavirus pandemic and as a result have lost hope but if they push ahead, things will get better. You also need to be disciplined and follow the instructions of your mentors and coaches," he said.

He expects the Kip Keino Classic to be his last for the year before he retreats to relax and plan for the World Championships in Oregon next year.

"I will just be spending time in the village, concentrating on my vegetable farm, among other activities. In my free time, I also like cycling and also attending local football matches. There is life besides athletics."