Kipyegon finishes season in style as she beats Hassan in Zurich

•Kipyegon for the third time this season beat her nemesis Sifan Hassan in an entertaining finish. 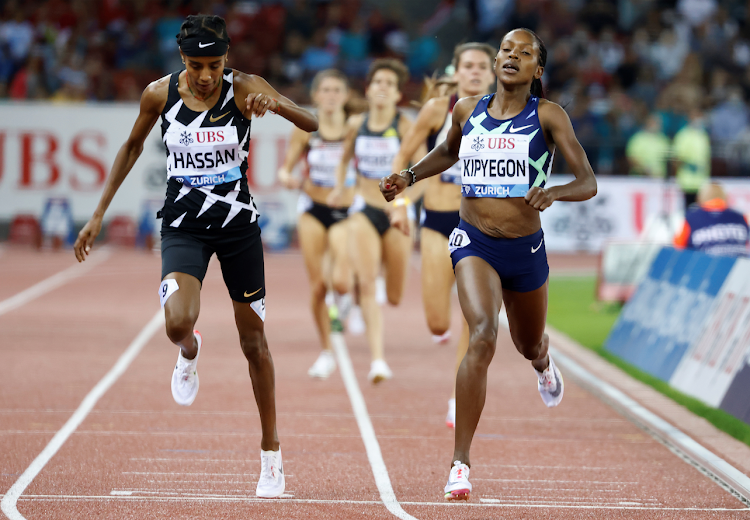 Two-time Olympic 1500m champion Faith Kipyegon capped the season in style, winning the Diamond league trophy in her specialty in Zurich on Thursday.

Kipyegon for the third time this season beat her nemesis Sifan Hassan in an entertaining finish. Kipyegon stopped the clock in 3:58.33, just a metre ahead of Hassan in 3:58.55. The USA's Josette Norris completed the top three positions in 4:00.41.

“I knew it would be a tactical race today but I was  confident I would do better in the last lap and it worked perfectly," Kipyegon said

Hassan admitted Kipyegon was “really one of the greatest athletes” but vowed to keep challenging her. Olympic 800m champion Emmanuel Korir once again stamped his authority by winning the men's race.

Cheruiyot employed the same tactics as his compatriot Kipyegon, forcing Ingebrigtsen to chase him from the bell. He tightened the screws gradually until he entered the home straight and lit out for home.

Like Hassan, Ingebrigtsen had the strength to challenge in the straight but not to draw ahead. Cheruiyot hung tough and took the glory (and his fourth Diamond League trophy) by 0.08 – 3:31.37 to 3:31.45. Australia’s Stewart McSweyn (3:32.14) completed the podium, one place ahead of his compatriot Ollie Hoare (3:32.66).

Norah Jeruto upstaged former world champion and Olympic silver  medallist Hyvin Kiyeng in the 3000m steeplechase. Jeruto and Kiyeng took the lead with 250m to go and dashed stride for stride towards the water.

But while Jeruto took the barrier smoothly, Kiyeng landed awkwardly in the water and lost the momentum. That was all Jeruto needed to take the victory.

Olympic bronze medallist Benjamin Kigen triumphed over Olympic champion Soufiane El Bakkali in the men's race. Kigen stuttered and stumbled at the last hurdle but maintained his composure to win in 8:17.45. El Bakkali, returning after a fall in Paris 12 days ago, finished second in 8:17.70 but was furious that he had left his run too late.