The world champion was a late inclusion after Kamar Etyang was barred from the championships due to failure to meet mandatory anti-doping test requirements.

•Cheruiyot will be competing in Heat 1 of the men's 1500m this morning, hoping to succeed American Matthew Centrowitz Jr as the new Olympic champion

•He has been in red-hot form, clocking a personal best and world lead of 3:28.28 clocked at his last race in July at the Monaco Diamond League

• Daniel Simiu, Nicholas Kimeli and Samuel Chebolei will hope to overcome a start-studded startlist and clinch Kenya's first Olympic gold in the men's 5,000m since 1988. 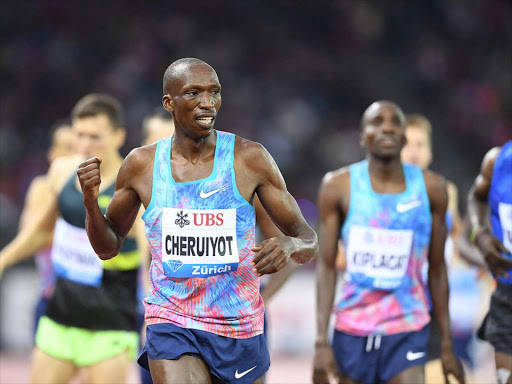 Timothy Cheruiyot in a past race

World champion Timothy Cheruiyot will be hoping his blazing form on the Diamond League circuit transmits onto the Olympic Stadium track as he commences his bid for Olympic gold in Heat 1 of the men's 1,500m this morning.

Cheruiyot was a late inclusion to Team Kenya after Kamar Etyang was rendered ineligible for the championships due to failure to meet mandatory anti-doping tests requirements.

A disappointing fourth-place finish at the national trials for the Tokyo Olympics in June is the only blight so far to the Bomet-born runner's flawless performance, which goes back to 2017 — when he first won the Diamond League trophy.

"Now officially in the Team Kenya camp. It is an honour to represent Kenya at the Tokyo 2020 Olympic Games," Cheruiyot said soon after his confirmation into the team.

Based on his personal best and world lead of 3:28.28 clocked at his last race in July at the Monaco Diamond League, Cheruiyot arrived in Tokyo as the outright favourite to succeed American Matthew Centrowitz Jr as the new Olympic champion.

However, Norwegian Jakob Ingebrigtsen might have something to say about that especially after the European record holder lost out to Cheruiyot in Monaco — timing 3:29.25 in third place.

Hopefully, the 20-year old's decision to double in the 5000m and 1500m in Tokyo will prove counterproductive and work in favour of Cheruiyot and Co. whose only focus is the three-and-three-quarter lap race.

Other Kenyans who will be competing include Abel Kipsang and Charles Simotwo.

Kipsang is buoyed by the 3:32.6 personal best he set in June in Marseille, France and is unperturbed by the aura of competing on the biggest stage of all.

"I know the competition there will be tough but am only focused on applying what I have learnt in training and not what other competitors can or cannot do. I believe in myself and in hard work as the only way to succeed, which is what I have been doing," Kipsang said.

Elsewhere, Daniel Simiu, Nicholas Kimeli and Samuel Chebolei will be thinking of how to rise above their star-studded opponents as the men's 5,000m heats kick off early morning.

Apart from Jakob Ingebrigtsen, other challengers the trio will have to overcome in their chase for a podium finish include: world record holder Joshua Cheptegei and Jacob Kiplimo (both Ugandans), double world champion Muktar Edris and Getnet Wale (both Ethiopians) and Rio Olympics silver medalist, Kenyan-born Paul Chelimo of USA.

It has been an eventful journey to Tokyo for Simiu who was dropped from the country's squad to the 2019 World Championships in Doha after failing to meet anti-doping test requirements.

"My family and friends kept encouraging me all through that trying time, telling me to keep working hard and that everything would pay off eventually. I want to promise you I will work hard and give my all in Tokyo to repay your trust and faith by bringing a medal back home," Simiu said after clinching his ticket to Tokyo.

Add into the mix the fact that Kenya's last Olympic gold in 5,000m came  33 years ago — courtesy of John Ngugi at the Seoul Olympics — and this 12-and-a half lap race could be one of the greatest storylines for the country at this year's edition.