Form Two student at Mubere Secondary School in Trans Nzoia was eyeing a place in Team Kenya to represent the country in the men's 800m but failed a late fitness test.

•He finished first in the men's 800m final at Moi Stadium, Kasarani and was selected in the 46-athlete team to represent the country at the World Under 20 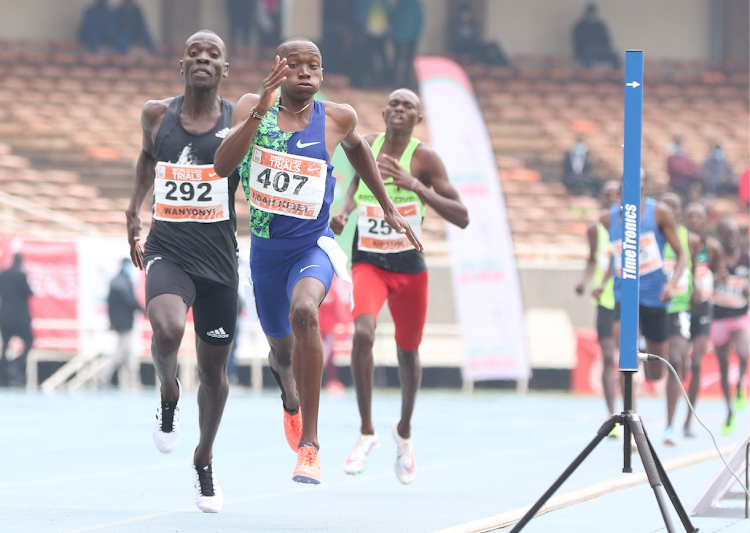 Noah Kibet and Emmanuel Wanyonyi in a neck-to-neck race to the finish line in the men's 800m at the national trials for the World Under 20.
Image: ERICK BARASA

After clinching a ticket to represent Kenya at the World Athletics Under-20 Championships, Noah Kibet is grateful for an earlier injury that ruled him out of the national trials for the Tokyo Olympics mid last month.

Kibet, an 800m runner, failed a late fitness test ahead of the national trials and with it went a chance to be among the youngest athletes to have represented Kenya at the Olympics.

"I had been invited to compete at the national trials but a leg injury meant I could not make it. It was so devastating at the time but I told myself that maybe it was all part of God's plan," he said.

"I then decided to focus on the Under-20 trials and I have been undergoing light training as I recover from the injury. I am happy to have finally made the team for the World Under-20 after the earlier setback."

He raced into the lead and held on for the top spot despite Wanyonyi's last-ditch attempts to overtake him.

"I never worked on my speed in the lead-up to the trials. I was simply jogging and undertaking other light exercises. I still need to improve on my finishing and, therefore, I want to increase my time in the gym for the Under-20 championships. I like to start strong because I know finishing is my greatest weakness especially in the last 600m," Kibet said.

He has further credited his teachers for allowing him to train and helping him go the extra mile to make up for the lost time in studies.

"We usually wake up as early as 5 am for our training and they (teachers) have been understanding enough to allow us ample time to train. Usually, there is a make-up class where the teachers take us through lessons or studies that we may have missed. This means we do not lag behind other students," he said.