•He described Kwemoi as a source of strength for him, saying he has continued to encourage him at all times

•This will be the second time wearing the Kenyan singlet after participating at the World Cross Country Championships in  Aarhus, Denmark  in 2019 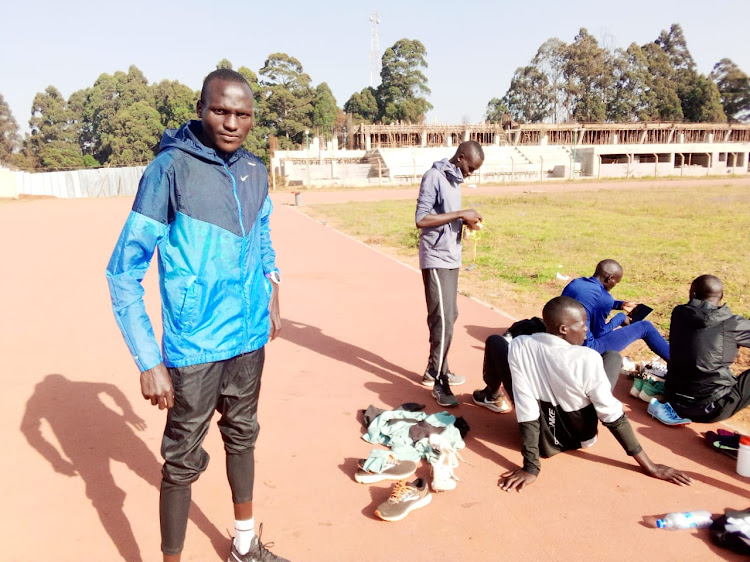 Samuel Chebolei (Standing) after morning training at the Kipchoge Keino stadium in Eldoret. He will be chasing an Olympic medal in 5,000m alongside Nicholas Kimeli and Daniel Simiu
Image: EMMANUEL SABUNI

Two-time national cross country junior champion Samuel Chebolei wants to emulate his elder brother Ronald Kwemoi as he hunts for a medal at the Olympic Games starting on Friday in Tokyo, Japan.

Chebolei, who used to train with his brother, the world junior 1,500m record holder Kwemoi under coach John Litei, said he wants to run like his brother who has dominated track events in 5,000m and 1,500m.

“He is my pillar when it comes to training and competing. He described Kwemoi as a source of strength for him, saying he has continued to encourage him at all times," Chebolei, who will be debuting at the Olympic Games, said.

Kwemoi, the national cross country champion, will be flying the country's flag in the men's 10,000m, alongside former world half marathon record holder Geoffrey Kamworor and Weldon Kipkurui.

Chebolei believes a podium finish will be the perfect way to erase the painful memories of 2018 when he was ejected from Team Kenya  to the Africa Athletics Championships.

“I was frustrated in 2018. Besides being ejected from the team, I was never given reasons why I wasn't in the team. However, I am mature enough to face the challenges. My focus is to win a medal for this country,” he said.

After finishing 8th at the 2019 World Cross Country Championships in Aarhus, Denmark, this will be the second time he will be wearing Kenyan colours.

In Tokyo, he will be working alongside Daniel Simiu and Nicholas Kimeli — both of who missed out on the World Championships in 2019 — to bring the country glory in the 5000m.

Chebolei had to graduate to the senior ranks having missed the junior races, including the 2020 Africa Cross Country Championships in Lome, Togo, due to Covid-19.