Head coach Julius Kirwa said they are eagerly awaiting the arrival of the athletes beginning Tuesday to start fine-tuning them ahead of July 5 when Team Kenya contingent departs for Kurume city in Japan.

•The 41 athletes to represent Kenya in Tokyo to enter residential camp at Kasarani beginning Tuesday before training begins on Thursday.

•Discussions on whether US-based duo of  Emmanuel Korir and Michael Saruni will be allowed to train from their bases in the U.S.

•Sports CS Amina Mohamed encourages athletes to better the performance of their predecessors at Rio 2016. 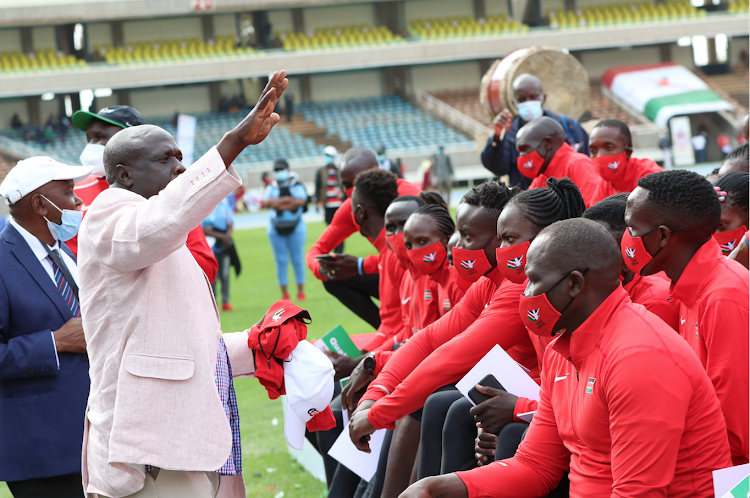 After gruelling three days of national trials at Moi Stadium, Kasarani, the Kenyan athletics team to the 2020 Tokyo Olympics will start residential camp training on Thursday at the same venue.

National head coach Julius Kirwa said he and his team are eagerly awaiting the arrival of the athletes, beginning Tuesday, to start fine-tuning them ahead of July 5 — when they begin their journey to Kurume City in Japan for overseas training.

"The athletes should start arriving at Kasarani from Tuesday. Once they are all in, then we should start the hard work of training them in preparation for Tokyo. That is where our work as coaches will be important," Kirwa said.

However, some of the athletes who secured their tickets to Tokyo have expressed their desire to continue training in their foreign bases.

They include the US-based duo of Emmanuel Korir and Michael Saruni, both of whom will be representing the country in the men's 800m.

"Yes, I will definitely be going back to the United States to continue my training. I would not want to change a lot in what I have been doing and so I will just be focusing on rectifying on my weak areas before rejoining the others," Saruni said after winning the men's 800m final.

Kirwa was coy on whether they will be any exceptions to the residential camp, only saying that it is a matter that will be discussed at the opportune time.

"It is more of an administration issue and not strictly coaching. I am sure it will be deliberated upon and a decision made but I don't see any issue with them wanting to continue training at their bases," he said.

The 41 athletes were unveiled on Saturday at Moi Stadium, Kasarani after three days of national trials during which the athletes had to meet the qualification time in their respective disciplines.

Furthermore, the top two athletes in each category gained automatic qualification to the quadrennial games.

Speaking after the naming of the team, Sports Cabinet Secretary Amina Mohamed reminded them of the huge responsibility that comes with making the final team to Tokyo.

"You carry our hope and our ambitions; protect our image as an African giant. Athletes have brought us glory year after year. We are confident that you will better the performance of our country at the Rio Olympics in 2016,"  Amina said.

AK president Jack Tuwei said the federation has put in place all measures to ensure the athletes meet the requirements for participation in Tokyo despite the tough Covid-19 period.

"AK has strictly adhered to the anti-doping requirements. The new anti-doping bill has enhanced the fight against doping and reduced such cases this year," said Tuwei.