Registration will be entirely free of charge

•Event vice chairman, Hoseah Sanga, said they thought it wise to use the nationwide attention the event would attract to sensitive the country about the importance of conserving the environment. 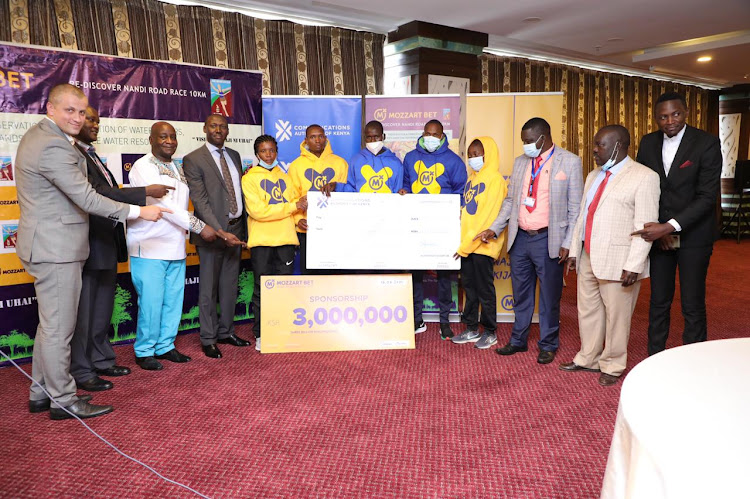 The Nandi Road Race 2021 received a major boost after online betting firm Mozzart and the Communication Authority of Kenya invested Sh3m and Sh1m to support the event scheduled for June 27 in Kapsabet.

The race, entering its 21st year now, has been themed 'Preservation and Conservation of water towers and wetlands for the sustainable water resources'.

Event chairman,Fred Kiptanui, extolled Mozzart and CA for their massive support and urged local athletes to make the event a big success by registering in large numbers.

“Registration will be entirely free of charge. We understand that a large number of budding athletes would find it difficult to raise money if we decided to ask for any entry fee,” said Kiptanui.

“We are proud to say Nandi has always been at the forefront of producing some of the most celebrated Kenyan athletes from time immemorial. That's why we saw it appropriate to host this event there to encourage more athletes from the area to come up,” said Kiptanui.

Event vice chairman, Hoseah Sanga, said they thought it wise to use the nationwide attention the event would attract to sensitive the country about the importance of conserving the environment.

“Water is becoming a scarce commodity and the forests are reducing in size,” quipped Sanga.

“We believe at CA that sports is very important element of promoting national cohesion. That's why we support National Super League side, Talanta. We invest at least Sh21m per year to promote sports in the country.

Dr. John Chumo, the CEC member for Environment for Nandi County said the country was losing its erstwhile water towers, adding something urgent needs to be done to address the threat before things get out of hand.

“The government policy is that we should increase the tree cover from 7.2 percent to 10 pc by planting 2.2bn trees by 2022,” said Chumo.