Koros shines in 10,000m as Kandie misses out on KDF event

His quest for victory was somehow aided by the absence of pre-race favourite and world half marathon record holder Kibiwott Kandie who could only watch and cheer from the sidelines.

•Long distance specialist Collins Koros clocked 28:39.3 for first ever career win in the men's 10,000m at the KDF Athletics Championships

•The win is the perfect way for him to bounce back after a disappointing outing in Stockholm, Sweden

•Hellen Obiri and Wiseman Were also shone in the women's 5000m and men's 110m hurdles, respectively 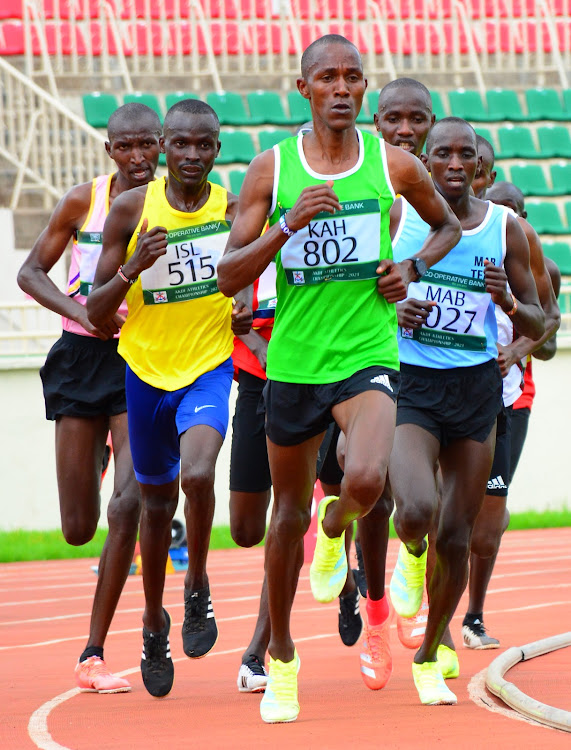 Long distance specialist Collins Koros says nothing compares to the  feeling of a first win in his athletics career after clinching the men's 10,000m at the Kenya Defence Force Athletics Championships at  Nyayo Stadium yesterday afternoon.

"This is my first win in the five years that I have been competing as an athlete. Although I have gained a podium finish in my past races, this is my first time taking the first position.   It feels great to win this race because it was very competitive and demanding. All the other runners came for nothing less than a victory," Koros said.

He said the win is the perfect way for him to bounce back after a disappointing outing in Stockholm, Sweden, where he finished fifth in the men's 10,000m during the Stockholm 25 Laps to Tokyo competition at the Stockholm Olympic Stadium last week.

Pre-race favourite and World Half Marathon record holder Kibiwott Kandie  could only watch and cheer from the sidelines. Nonetheless, Koros doesn't think Kandie's absence diluted the level of competition in any way.

"It was unfortunate he could not join us today although I expected competition to be tough regardless of his absence. He's someone I know very well having trained with him and even competed against him at the National Cross Country Championships, where I finished third. It would have been great for him to also participate in this race," he said.

Despite failing to make the qualifying mark for the Tokyo Olympics in the Swedish capital, Koros has not given up on his dream of a place in Team Kenya's squad to the quadrennial showpiece.

In the women's 5,000m, world champion Hellen Obiri carried on her hot streak to take top honours ahead of Joyce Chepkemoi and Sheila Chepkirui.

Fresh from winning bronze at the 2x2x400m mixed relay, Wiseman Were breezed to victory in the men's 110m hurdles ahead of Michael Musyoka and William Mbevi.

The annual championships, which brings together different divisions within the disciplined force, continues today and tomorrow with more heavyweight clashes on the cards.