•Titus Ekiru set a personal best of 2:02:37 to win the men's marathon at the Milano Marathon on Sunday. 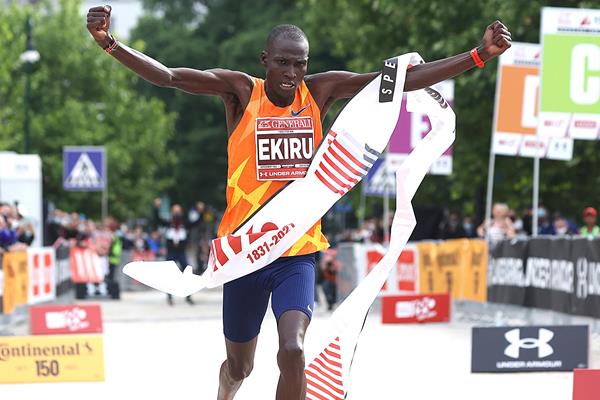 After clocking a personal best of 2:02:57 to win the Milano Marathon on Sunday, Kenya's Titus Ekiru is keen on lowering it to 2:01:00.

Ekiru expressed confidence that it is only a matter of time before he lowers his PB as he is currently in the best form of his life.

"I will relax for some time when I return home and then sit down with my coach to discuss what's next. You never know, maybe in the future I will be able to run 2:01:00," said the 2019 African Games half marathon winner.

Ekiru, who also set a course record at the 2019 Honolulu Marathon, said it was a tough race regardless, noting that the tough competition from other runners had prompted him to up his game.

"At 20km, I was already in tune with the race and felt that I was getting better physically as time went by. At 30km, I decided to increase the speed a bit and then at 35k, I felt I could push myself more. I am glad that the strategy worked," Ekiru said.

In the women's race, Ethiopia's Hiwot Gebremaryam had to pull out all stops to edge out Kenyan Rachael Jemutai to the tape in 2:19:35 compared to the latter's 2:23:10.

Focus shifts to the Doha Diamond League on May 28 where several Kenyans will be hoping to reap big.