The CS warned any attempts to threaten ‘our patriotic pride as a nation can only be termed and treated as a threat to our national security.

•Detectives are investigating an incident where the suspect colluded with a Mr. Christian Rohde who claims to work for a German Television Network known as ZDF.

•The CS warned that sports being the core part of Kenya’s national identity, any attempts to threaten ‘our patriotic pride as a nation can only be termed and treated as a threat to our national security.

Cabinet Secretary for Sports, Amina Mohamed, on Monday urged Kenyans to shun unscrupulous foreign journalists who harbour a malicious agenda against the nation.

“We wish to state that the ministry has noted with great concern that whenever Kenya is about to participate in a major International Sporting event, unscrupulous characters embark on a mission to disparage Kenya’s decades of well-deserved sporting repertoire and our leadership in the global anti-doping efforts.”

Amina made strong remarks through a press release after officers from the Directorate of Criminal Investigations nabbed a suspect accused of having furnished a foreign correspondent with falsified information.

The suspect was found to be in possession of forged documents purportedly obtained from the Anti-Doping Agency of Kenya and Athletics Kenya.

Detectives are investigating an incident, where the suspect colluded with  Christian Rohde, who claims to work for a German Television Network known as ZDF.

“Our attention is drawn to an email sent by an individual known as Christian Rohde. In the email, Mr. Rohde alleged he received information that Kenya, through ADAK and Athletics Kenya [AK) are engaged in a systematic coverup of doping cases among Kenyan athletes,” read the statement in part.

Upon getting wind of the email, ADAK immediately alerted the office of the Director of Criminal Investigations (DCI), who swiftly took over the matter for investigation. 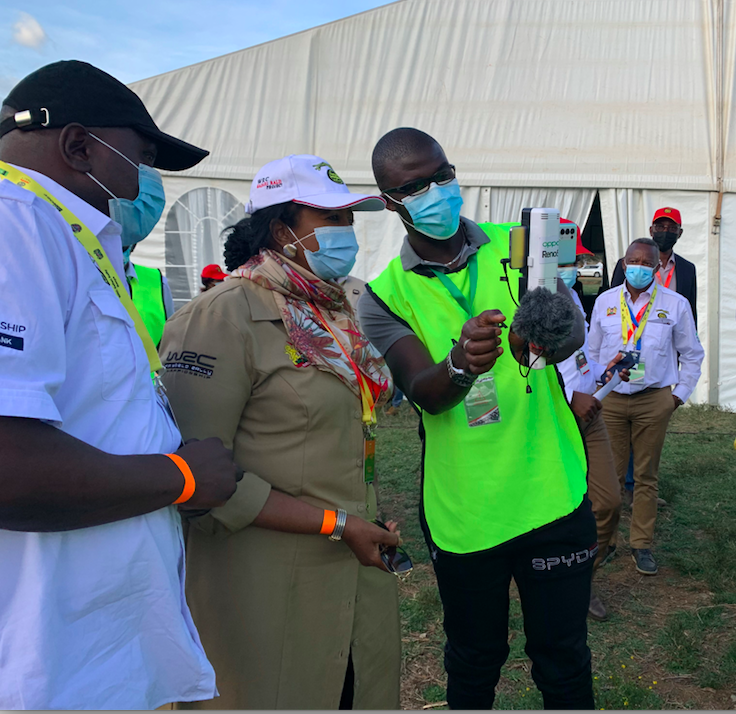 “The ‘alleged informant’ was arrested and found in possession of several copies of forged letters supposedly sent from ADAK and Athletics Kenya (AK).”

“He was also found in possession of three laptops and several mobile phones which have been confiscated for analysis. This individual was charged with twelve counts of forgery and arraigned before a Court of Law this morning for plea taking.”

The CS warned that sports being the core part of Kenya’s national identity, any attempts to threaten ‘our patriotic pride as a nation can only be termed and treated as a threat to our national security.

She pointed out the allegations were a well-orchestrated move aimed at portraying Kenyan athletes negatively in the eyes of the world.

“Regrettably, these isolated foreign journalists collude with a few unpatriotic and corrupt Kenyans to compile this false information on their behalf in an attempt to false authenticity.”

“We have carefully evaluated their patterns and noted that these falsehoods are peddled against Kenya’s most celebrated and admired athletes.”

“We can only presume this strategy is meant to demoralize our athletes and distract them from focused training.”

Amina expressed dismay that some foreigners had reciprocated Kenya's kindness and generosity with ingratitude by deliberately pushing an agenda apparently aimed at tarnishing the country's image.

“More importantly, Kenya has welcomed the world to witness and interact with athletes in the form of sports exchange programs, sports tourism, education, and professional sports management.”

“We have always been open, friendly, warm, and welcoming to all our visitors including journalists. It is unfortunate that this generosity and openness has in rare, but extremely damaging circumstances such as the present case, been abused to the detriment of our national image and the impeccable global reputation of our hard-working athletes.”

She commended local journalists for displaying character through an exemplary embodiment of fair practice.

“It is particularly disheartening to note that while our local journalists accord international athletes competing in our country and externally full support and respect, certain international journalists have made this ‘doping’ crusade a personal mission and progressed journalistic material in the form of documentaries, digital and print press based on false information aimed at destabilizing the fabric of our national sporting heritage.”

“Thankfully, this crusade is limited to a small number of journalists from Germany and more recently Denmark and Norway.

“These allegations are baseless, careless, reckless, and attack to the credibility of an entire country and our hard-working, globally renowned athletes who have worked tirelessly to earn their place on the international hall of fame.”

Amina said there was no way Kenya would backtrack on the very laws it had helped establish.

“Kenya has served on the WADA Foundation Board and collaborated with WADA to align our laws to international standards, anti-doping education, comparative anti-doping efficiency systems, athlete education, technological advancement for results management, and many other core areas necessary to build an effective anti-doping ecosystem.

“Kenya was the second country in Africa to enact the Anti-doping law. Kenya has also earned global recognition as a competitive athletic country with undisputed command in long-distance running with steady expansion into field disciplines such as rugby, volleyball, and basketball.”

The CS also noted that the world had entrusted Kenya with the honour of hosting major international events owing to its impeccable track record.

“We have also submitted an active bid to host the World Athletics Championship, 2025. A lot of resources have been devoted to sports and to building solid sports governance processes with the athlete at the centre of our determination to excel.”

Amina assured Kenyans that the law would definitely catch up with athletes found culpable of contravening the anti-doping laws, adding the Ministry has put in place a myriad of measures to protect and support the athlete as well as secure the integrity of sports in Kenya.

“It is common knowledge that any athlete found culpable of doping globally in any country is sanctioned in accordance with international anti-doping regulations.”

“This has been the case since doping was recognized as a crime at the beginning of the previous century. The athlete is the centre of government policy on sports.”

“We remain steadfast in our efforts to ensure the agenda of anti-doping and clean sport is achieved in our country and across the world. We further pledge to continue in our determination to bring to book all those involved in tarnishing the good name of our athletes and country.”

The CS moved to assure Kenyans that elaborate, water-tight systems were already in place to protect the integrity of the Anti-Doping program which is managed in strict adherence to the World Anti-Doping Code, it's related International Standards, the Anti-Doping Act, and the Anti-Doping Rules.

Amina said ADAK was established in 2016 to undertake all Anti-Doping Activities in the country and in 2018, they established the Intelligence and Investigation Unit in accordance with the international standard for testing and investigations.

“To align our laws to the new World Anti-doping Code (2021) and newly introduced international standards, H.E the President signed into law the Anti-doping Amendment Act (2020).

“In 2020, ADAK established an e-learning portal to reach out to all our stakeholders. This is the only one of its kind in Africa to date,"

“Over 80,000 athletes have been educated on Anti-Doping matters and more than 4,200 samples collected from athletes for analysis at WADA accredited laboratories in Doha, Qatar and in Bloemfontein, South Africa,” said Amina.

The CS said her office would continue to work closely with local media to help in tackling the vice.

“We thank the media for their continued support in this noble agenda and invite you to engage the ministry on any information requiring verification.”