HEART OF A LION

He has already outlined international competitions in which he will participate once he is healed, including London Marathon, Amsterdam Marathon, Berlin Marathon and Boston Marathon.

Edwin Mokua in his hospital bed at the Nakuru VGH Level Five Hospital after the attack.
Image: Emmanuel Sabuni

It was 4pm on September 29 last year when Edwin Mokua set out with Dennis Kipkosgei, his running partner, for a training session on the outskirts of Nyahururu town in Manguu village.

Mokua was to leave the country for Turkey the next day to compete in the Izmir Marathon and this running session was a warm-down after an intense run in the morning.

Ahead of him lay approximately Sh2 million that he would have claimed had everything gone to plan and clinched first place.

However, as he was making one of his countless steps in pursuit of this jackpot,  a hippo ambushed him and launched a savage attack on him.

“When I saw it, I knew that I was done for sure. Meeting a hippo was the last thing on my mind and to encounter this one was a total shock for me. It was right there standing before me menacingly and before I knew it, it was running after me,” the 2013 and 2014 Ekiden 10km champion recounts.

The area in which the attack happened was a hilly landscape full of grass, which greatly hampered his efforts to get away from the beast.

“I tried evading it by running around in corners so as to throw it off course. However, it soon caught up with me. Whenever we run in that area, we are always careful to avoid the river banks where the hippos are usually situated. I think the fact that the area is not fenced might have allowed them to stray into our route,” Mokua says.

The Trabzon Half Marathon champion suffered serious fractures on the shoulder and on the arms, which necessitated a surgical operation.

Hippos are notorious for their aggressiveness and savagery, which is responsible for many deaths across the continent.

That Mokua lived to tell this gruesome tale is a mystery and a miracle he attributes to God’s grace and determination to give him a second chance in life.

Had it not been for Kipkosgei who rushed back to his rescue, Mokua would have been in a worse-off state. 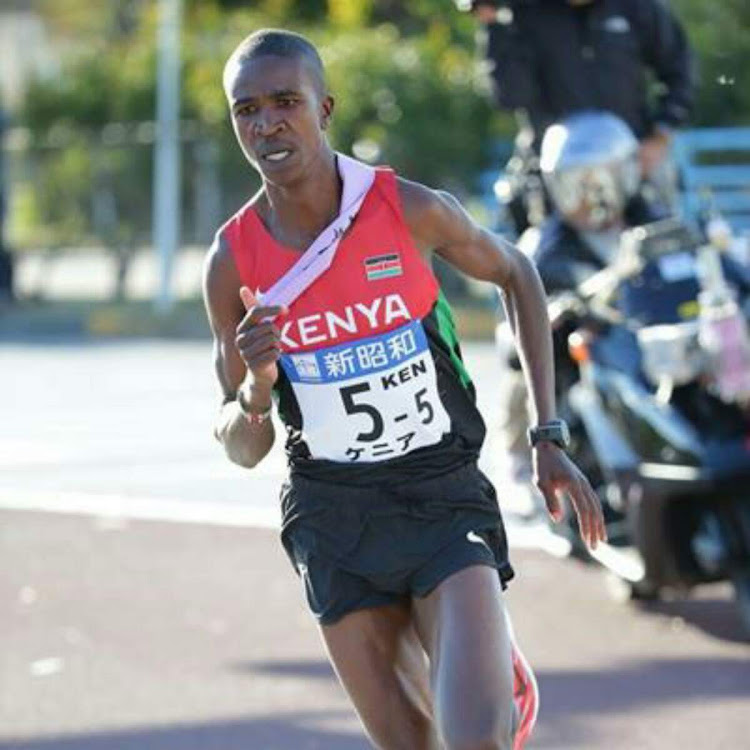 Edwin Mokua in a past race.
Image: COURTESY

All that is now history for Mokua who is continuing his rehabilitation with his eyes fixed on a return to the road in what he describes as a rise from the ashes.

What pushes him onward to his return is a positive report from his doctors who say Mokua can run again if he  makes it through his physiotherapy sessions.

“Fortunately, I did not suffer serious injuries on my legs compared to my upper limbs. Every time I go for physiotherapy , the doctor has been quick to assure me that I can return to competition if I work hard on my rehabilitation,” Mokua says.

He has been attending physiotherapy sessions twice per week at Kisii Referral Hospital, situated 4km from his home.

The desire to get back to action has prompted him to go the extra mile to recover by applying the knowledge learnt from his sessions at home.

“Sometimes when I am alone at home, I try to stretch my arms a bit so that it does not remain in the abnormal position it is in. The doctor said I may need another operation if there is no change any time soon but so far so good,” Mokua says.

In his mind, he has already outlined a raft of international competitions in which he will participate once he is healed and raring to go.

They include the creme-de-la-creme of international marathons, such as the London Marathon, Amsterdam Marathon, Berlin Marathon and Boston Marathon, among others.

“After eight months, I want to return to running because it is my source of income. I was advised by the doctor I should start training after this period,” he says.

Also top on his to-do list is an appearance at next year’s Eldoret City Marathon, which he is gutted to miss out on this year’s edition due to his injuries.

“It was one of the races I had targeted because of the enticing prize money that was on offer for the winners. It was a race I believed I could have secured a podium finish with much preparation,” Mokua says. 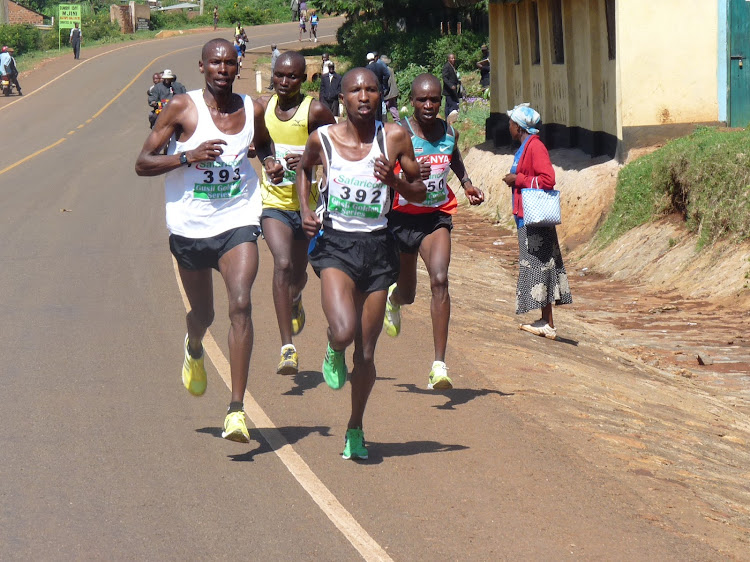 Edwin Mokua (R) competes in a past Kisii Half marathon race

Even as he maintains a positive attitude, there are many hurdles in Mokua’s path to recovery and return to action.

Chief among them is financial hardship, which has exacerbated as a result of the Covid-19 pandemic and medical costs of his physiotherapy sessions.

Once a breadwinner of the family, Mokua is now dependent on his wife, Caroline Chepkorir,  a grocery trader, who shoulders much of the family’s financial burden.

“I heavily depend on my wife to feed the family but before I was injured, we used to share the responsibilities. So far, I also have to cater for my physiotherapy bills not forgetting that we have a child in school who requires school fees,” he recounts.

These hardships worsen the psychological sting of the hippo attack, which not only robbed him of a chance to compete in Turkey but also caused financial losses associated with preparing for the race.

“I remember I had booked an air ticket weeks in advance. There were also the costs I had incurred in preparing for this race. In total, I spent an estimated Sh350,000 in preparations, which all went to waste as a result of this incident,” Mokua says.

Mokua is eligible for compensation by Kenya Wildlife Service for the injuries incurred but is yet to launch a claim with the parastatal’s offices in Nyahururu.

“Once I am fully recovered, I will visit their offices to fill in the compensation forms. Nyahururu is quite some distance away and with the financial challenges I am experiencing, it is difficult to just wake up and travel there,” he says. 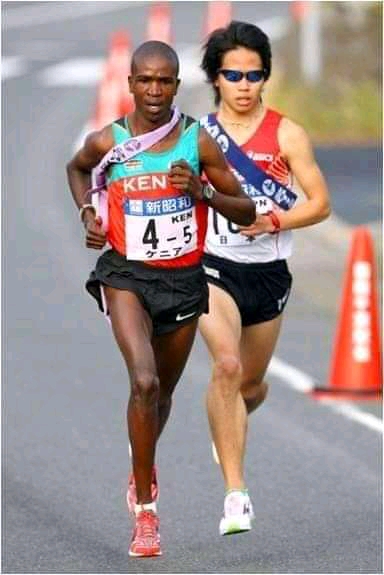 Mokua competing in the Chiba Ekiden Marathon, which he won twice in 2013 and 2014.
Image: COURTESY

On certain days, Mokua admits grappling with doubt as to whether life will return to normal or even get better.

However, he is thankful to his family and friends who have offered him words of affirmation to enable him to hold on to hope.

“My wife and children have been there for me all through. When I am alone, it is possible to struggle with doubt but with the children around, my heart rejoices. Friends have been visiting me, telling me that I am strong person and will soon return to marathon racing,” Mokua narrates.

He has not lost his social zeal and when he is not attending physiotherapy sessions, he is hanging out with his pals to catch up and share ideas on various issues affecting their lives.

Despite the hippo attack, Mokua has fond memories of Nyahururu and describes his running partners in the area as his second family.

“From the time I was attacked, they have been checking up on me to find out how I am doing. They can’t hide their excitement to see me get back to training with them,” he says.

In particular, he is in awe of 2016 World Half Marathon silver medalist Bedan Karoki who he describes as a role model.

“He is down-to-earth. Usually after training, he would take us out and give us a treat. He is also ready and willing to share insights with other athletes on how to improve their performances. I admire his personality and look up to him,” he says.

The strength of a man is evident in the way he picks himself up after falling; a huge setback such as Mokua’s would be more than enough to dishearten many.

By setting his sights on a return, Mokua has already demonstrated his indefatigable will to thrive amidst the circumstances.

His would be the greatest story ever told were he to grace the podium places of the renowned marathons of this planet.