Ekwam, who trains at Ndura Athletics Club in Kitale, only developed interest in athletics in 2018 as a form four student at Kapenguria Boys Secondary School having previously focused on his studies.

•He is in a rich vein of form, having upset a stellar lineup to win the 400m race at this weekend's AK Track and Field Weekend meet at Nyayo Stadium, Nairobi 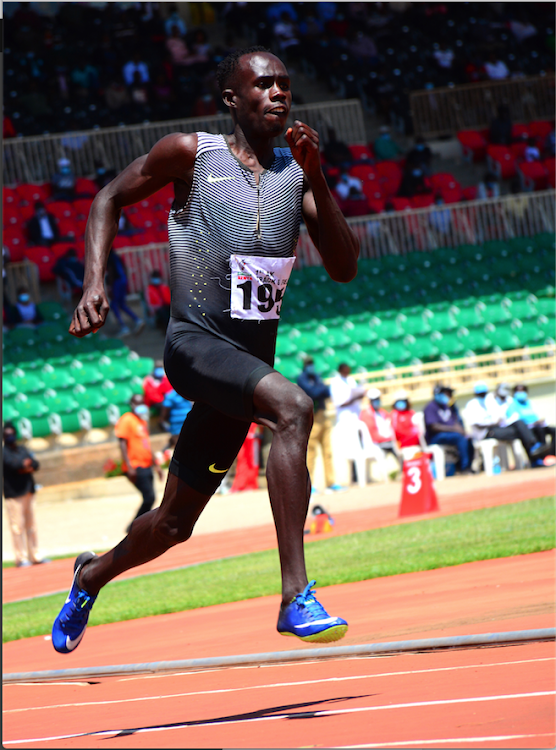 Fast-rising 400m sprinter Zablon Ekwam is confident he can smash the 400m world record of 43.03 if he continues performing exceptionally on the track.

The Todonyang'-born Ekwam said it would be a dream-come-true to surpass the achievements of current world record holder, Wayde van Niekerk of South Africa.

"I am only 21 years old and so I believe I am still young and more than capable of setting a new world record in the near future. I have always admired van Niekerk; he is my role model who inspires me to run the way I do. If I break his world record, it would be the highlight of my career," Ekwam said.

Ekwam, who trains at Ndura Athletics Club in Kitale, believes athletics is paying off well for him despite only just developing interest in the sport in 2018.

"I only started competing in athletics while in Form 4 at Kapenguria Boys Secondary School. Before then, I was not active in sports because my father had insisted that I focus on my studies. I started out as a 100m sprinter but my coach advised me to shift to 400m, " Ekwam said.

He was speaking after upsetting a stellar lineup, including Commonwealth 800m champion Wycliffe Kinyamal and World Relay 4x400m bronze medalist Jared Momanyi, to win the 400m race at this past weekend's AK Track and Field Weekend meet at Nyayo Stadium, Nairobi.

Ekwam clocked 45.65 ahead of William Raiyan and Kinyamal who finished second and third in 46.13 and 46.55, respectively.

The youngster was over the moon after the race describing it as the perfect result he had wanted when departing Kitale for Nairobi.

"I have never competed against these giants before and it feels great to have clinched first place ahead of them. Before I came to Nairobi, my initial target was to run under 45 seconds. In the heats, I ran 46.65 and in the finals, I have managed to lower it so I can go home feeling proud about my achievements," he said.

He credited his coach, Phillip Ndura and dedicated his victory to him for the support the coach has afforded him to grow his short career in sprints.

However, it was not smooth sailing for Ekwam who had to grapple with  niggling back injury sustained three days ago.  He will be seeking to sustain the momentum at the next two legs of the track and field series scheduled for the same venue.