World Athletics president Sebastian Coe described the performances as impressive and a preview of the Tokyo Olympics. 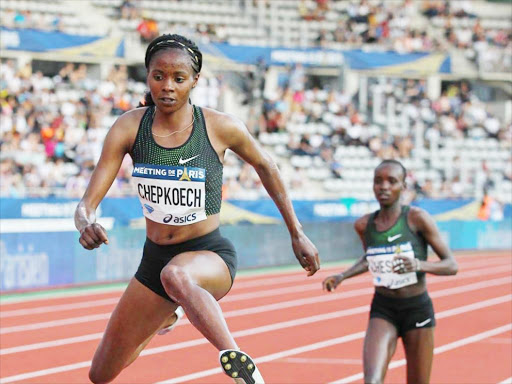 Beatrice Chepkoech during a past race /COURTESY

The 3,000m steeplechase world record holder Beatrice Chepkoech said her 5km world record at the Monaco Run was beyond her wildest dreams.

The performance by the 29-year-old Kenyan bettered the previous record in a mixed-gender race of 14:48 set by Caroline Kipkirui in 2018, and is also one second faster than Sifan Hassan's 14:44 record for a women's-only race, until this morning the fastest time ever produced over the distance since the 5km was introduced as a world record event in November 2017.

Sweden's Meraf Bahta finished second in 15:46 ahead of homegirl Alice Finot, who clocked 15:52.

"I am so happy because I didn't expect to break the record. I was just running. I followed my pacemaker and he kept pushing me and encouraging me that I could do it," Chepkoech said.

However, Chepkoech revealed it was not smooth sailing as the strong winds blowing in the early stages of the race somewhat slowed her down.

"The first kilometre was fast before the next one slowed down because of the winds. However, the pace picked up before the tunnel and I decided to increase the pace by the time we were inside the tunnel," she said.

Monaco has been kind to Chepkoech, who broke the 3,000m steeplechase world record in the city-state in 2018 when she clocked 8:44.32 at the IAAF Diamond League.

She said she is looking forward to more races in the city, which she described as her 'lucky charm.'

"It is so great. I love this place. I would urge organisers to prepare more races because many athletes love it here because it is a fast course," Chepkoech said.

Chepkoech has now turned her attention to one more indoor race before she returns home in preparations for the Tokyo Olympics.

In the men's race, Ugandan Joshua Cheptegei narrowly edged out the Kenyan duo of Bethwell Birgen and Davis Kiplangat.

World Athletics president Sebastian Coe described the performances as impressive and a preview of the Tokyo Olympics.

"I think the comfort the athletes can take from today, especially the two winners, is that they are in great form. All athletes have shown great resilience during the periods of lockdown," Coe said.