• During his heydays, he stirred animated conversation in town and the mere presence of him on the streets would send tongues wagging in excitement. In a nutshell, he was a huge success.

• He won twice in the 2010 Diamond League and finished with enough points to become the inaugural steeplechase Diamond Trophy winner. 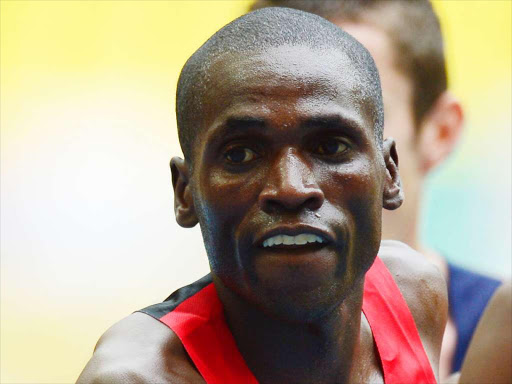 When a high-flying Paul Kipsiele Koech made the painful decision to quit athletics at the peak of his stellar career and turn to farming, the world was taken aback.

Here was a man who had mastered the art of clinching medals in every major international competition bowing out of the race so prematurely.

Eight years down the line, Koech is contemplating a return to competition. Although a good number of readers would experience difficulties recognising his name, those who have known him well enough over the years do appreciate his exemplary scorecard in athletics.

Koech is not your run-of-the-mill sportsman. During his heydays, he stirred animated conversation in town and the mere presence of him on the streets would send tongues wagging in excitement. In a nutshell, he was a huge success.

So much was his fame in athletics that people on the streets would crane their necks to catch a better glimpse of him anytime they saw him nearby; he was a darling and a star.

He deserved all the attention he got then. This was an athlete whose personal best time of 7:54.31 minutes had made him the world's third fastest steeplechaser of all-time.

Born on November 10, 1981 at Kapchepkoro in Sotik District, Koech attended Cheplanget Secondary School in 1999 where he began cutting his teeth in athletics. Later on, after completing high school, he participated in the National Cross Country Championships and finished at the top to secure himself a trip to Europe.

There, he inked a deal with James Templeton, the Australian elite athletes manager. The soft-spoken father of two, who will be turning 40 in a few months time kicked off his journey to stardom with a bronze medal which he bagged in the 3000m steeplechase race during the 2004 Olympic Games held in Athens, Greece.

During his career spanning slightly over a decade and a half, he wrote impressive chapters in cross country battles, scooping critical wins at the Cinque Mulini in 2006 and the Irish Lotto Cross Cup 1,500m race in Glasgow in 2007, where he clocked 3:37:92. He proudly holds the steeplechase meet record for the Prefontaine Classic, Adidas Grand Prix and DN Galan.

He competed in all the seven IAAF World Athletics Final meetings, all the while, securing a top three finish, leaving a mark as the only athlete to have achieved such a fete. In February 2010 he set a world best of 5:17.04 in the rarely competed 2000m indoor steeplechase.

He won twice in the 2010 Diamond League and finished with enough points to become the inaugural steeplechase Diamond Trophy winner. He improved his indoor 2000 m steeplechase record to 5:13.77 at the Indoor Flanders Meeting in February 2011 finishing third behind Saif Shaheed and Brimin Kipruto.

He has two gold medals, three silvers and two bronze medals to his name. Koech has created a camp at his home where he trains local athletes as part of his ways of giving back to society. The camp also hosts aspiring athletes from foreign countries.

Shockingly though, after bringing the country all the glory and honour, he drastically took a break from the track to focus on farming. Today, he runs a number of enterprises at his Kapchepkoro village farm in Sotik, Bomet county, where his main activity is dairy farming.

We sought to know why Koech chose to quit the track at the peak of his career. Our curiosity led us to his home in Sotik where he warmly received us on a sultry Friday afternoon. When we arrived, we found him presiding over the activities of his farm employees who were busy feeding and milking the cattle.

From the look of things, Koech has undoubtedly invested heavily in the venture which he says he holds so dearly. Our quick count captured at least 20 heads of well kept Fresian cattle grazing on the pasture.

“This is one project I like the most. Immediately I came back home to take a break from international events, I took up this project and it has really helped me to eke out a living,” says the soft-spoken man.

He adds, “Once an athlete always an athlete. So, when I'm done with my usual running and exercises I always make my way to the farm to check on my cattle.”

Finally, he ushers us into his house. The beautiful mansion glows with elegant sparkles emanating from a wide spectrum of trophies and medals he won in major competitions, including the Diamond League, the Commonwealth games and the Olympics.

Equally eye-catching are the large wallpapers and colorful portraits mounted on the walls, which capture him in action at the numerous events he has graced as an athlete. As soon as we settle down, Koech opens up about the events that led him to make the painful decision to quit the track, and is quick to point out that he no longer wishes to fly the country's colours abroad.

He relives a sad day in his career in 2008 when things began going south for him. It was during the national trials held at the Nyayo National Stadium to select a Kenyan delegation to the Beijing Olympics.

Koech says he was ahead of a pack of athletes in the 3000m steeplechase race when one of his competitors intentionally knocked him off the balance and sent him tumbling into the water.

"I fell down but quickly got back on my feet. Although I had incurred an injury and felt exhausted, I never gave up and fought on to complete the race,” he explains.

The incident caused him a major setback and got him locked out of the traveling squad after finishing fourth behind Olympic champion Ezekiel Kemboi, world champion Brimin Kipruto and African champion Richard Mateelong.

Already abroad and much to his surprise, he received a call from a team official asking him to travel back home to train with the select team. Although he wasn't among the top three finishers in the national trials, his best time that year was seven seconds faster than anyone else and every one including the media questioned his conspicuous absence from the final squad that was named to travel.

Impeccable sources also indicate that the coaches were initially apprehensive of  Kemboi's form because they did not like the way he was jumping, and as such Koech was flown to Beijing as a reserve. However, coach Julius Kirwa eventually decided he would be sticking with the trio selected after the trials.

Even though he was incorporated in the squad, Koech says he was yet to see the worst. Unlike his teammates, he was housed in the remote villages of Beijing town. Sensing that this was a move intentionally pulled off to humiliate him, Koech finally gave up and jetted back to the country a disappointed man.

Koech says he has now put all that behind him as he  plots a major comeback.  This time round, however, he intends to take part in road races and steer clear of all track events.