Chepngetich currently trains by herself in Ngong,

•Chepng'etich reckons that with proper preparations and focus, she will dethrone Kosgei.

•She will enjoy the company of her compatriots Vivian Cheruiyot, who will be making her fifth appearance in the Olympics and Kosgei. 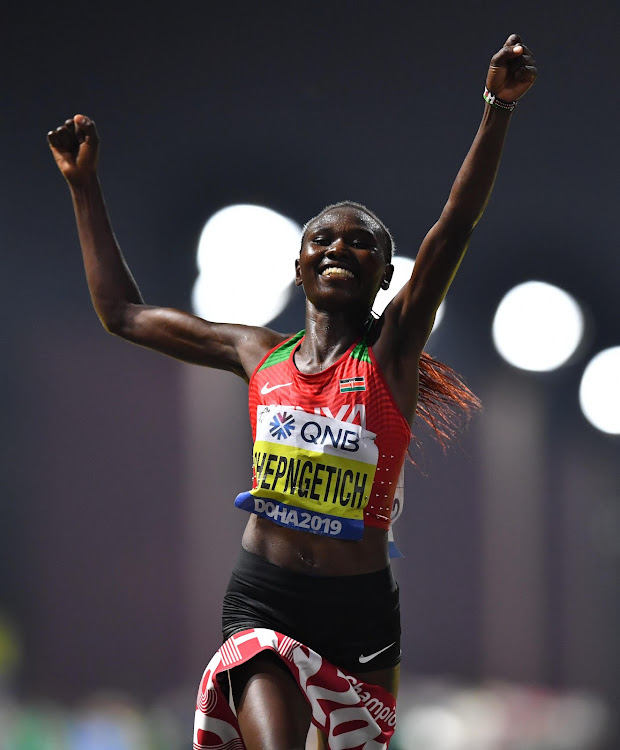 World Marathon champion Ruth Chepng'etich believes she has what it takes to break the world record in the near future.

Chepng'etich, who currently trains by herself in Ngong, reckons that with proper preparations and focus, she will dethrone Kosgei.

Her personal best stands at 2:17:08 recorded during the Dubai Marathon in January last year.

"Breaking the record has crossed my mind on several occasions and I am looking forward to achieve it in future. Even though I haven't identified the race in which I will pursue the dream, I believe once normalcy returns, I will be able to plan on how I will execute it. It starts with the mindset," she explained.

Besides breaking the record, Chepng'etich, who was part of the athletes who benefited from training gear donated by the National Olympic Committee of Kenya (NOC-K), expressed confidence in winning the Olympics come next year.

The 26-year old is part of the Kenyan marathoners selected in January for the now postponed Games. She will enjoy the company of her compatriots Vivian Cheruiyot, who will be making her fifth appearance in the Olympics and Kosgei. Frankfurt Marathon champion Valary Aiyabei and Sally Chepyego are in the reserve team.

"I thank NOC-K for the equipment which will help me strengthen my hands and limbs. I can't wait for the Olympics where I will be aiming to claim the gold medal. We have a strong team," said Chepng'etich.

Elsewhere, for the first time in Olympic history, the women’s and men’s marathon victory ceremonies will both be held during the Closing Ceremony at the postponed Tokyo 2020 Olympic Games, the updated athletics timetable reveals.

Inclusion of the marathon medal presentations in the Closing Ceremony will cap the 10-day athletics programme unveiled today, which follows the timetable previously announced for the 32nd Summer Olympic Games prior to their postponement in March.

The programme commences on July 30, 2021 with the opening round of the men's 3000m steeplechase and concludes on the final day of the Games, August 8, with the men's marathon in Sapporo, capital of the mountainous northern Japanese island of Hokkaido. In between, competition will be spread over 16 sessions at Tokyo's Olympic Stadium.

Athletics figures prominently in both of the Games' 'Super Saturdays', with three finals—the men's discus throw, women's 100m and the inaugural mixed 4x400m relay—scheduled for July 31.

Another seven athletics titles will be decided on  August 7, among 34 event finals scheduled for that day, the highest single day number during the Games. 'Golden Sunday' on July 31, will include 25 medal events in all, capped by the men's 100m final.