• The community race is held before the main marathon

• The sponsorship will go towards community developments in Lewa 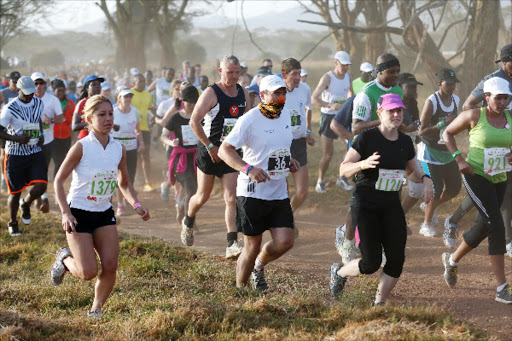 A past Lewa Marathon race

In preparation for the 2019 Lewa Marathon, Kibo Africa have donated Sh1m sponsorship for the Lewa Wildlife Conservancy Community race.

The sponsorship will go towards community developments in Lewa such as fencing, health projects, books donation in schools among others.

The community race is held before the main marathon with an aim of bringing the nine communities in Lewa together and foster their understanding on wildlife conservancy.

Proceeds from the marathon, which started in 2,000 have enabled the provision of education to over 10,000 children, equipped eight medical facilities and supported community development projects which have so far benefited over 50,000 people in the region.

“Kibo is proud to be supporting the efforts of Lewa Conservancy and Northern Rangelands Trust against poaching and in aiding development within the communities in Lewa,” said Kibo Operations Director Alvin Mageto.Last year Kibo was the official bike sponsor and they donated motorbikes the K150 to be used by patrols to aid in anti-poaching.

The annual marathon organised by Lewa and partners, Tusk Trust, will be held on June 29.It will be the 20th edition of the marathon and to mark this milestone, they aim is to raise Sh100m, 20 times the amount that was raised in 2000.