City Stars' Opiyo prepares for the future after playing career

•Opiyo took a break to kick start his coaching journey in Thika, and was one of the graduands after attending classes for ten full working days from 9-21 January 2023.

•The midfielder said it’s essential for coaches, especially those handling youths to have the necessary qualifications. 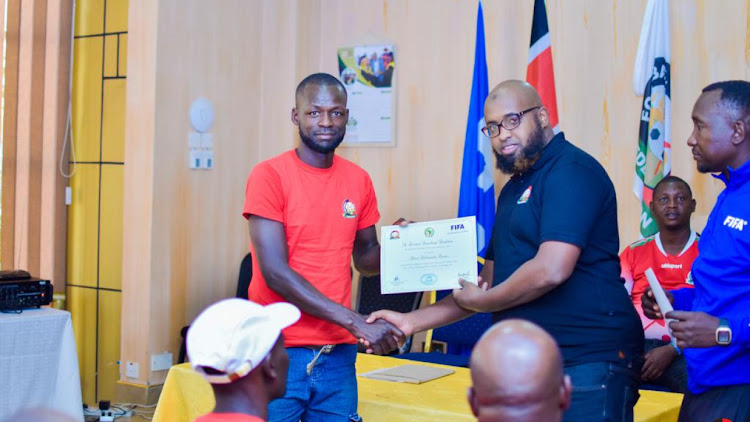 Opiyo took a break to kick start his coaching journey in Thika and was one of the graduands after attending classes for ten full working days from January 9-21,  2023.

“I decided to start training as a coach because it’s essential to our football. And it starts with paperwork. It has always been my ambition to become a coach. In my playing career, I have gone through many coaches many of whom did very well and I always admired their work,” he told the club’s website.

He added: “When this opportunity came up, I decided to go for it to expound on my view of football. The game is now very dynamic and wide, and a lot has changed. It’s important to grasp the new methodologies so as to guide the future generations with the most up-to-date skills.”

The midfielder said it’s essential for coaches, especially those handling youths to have the necessary qualifications.

“I have come to the realisation that we did a lot of wrong things back then when we were starting out and invited career-threatening injuries.

" This is because most of those that coached us then did not have the right knowledge on how to handle the youth. It is only by the grace of God that we survived it all and that’s why we are still in the game,” he noted.

Opiyo, now in his fourth season with City Stars, said: “My playing career is coming to an end soon. It is therefore important to arm myself with something that will still keep me in the game, albeit in a different capacity.”

With the ‘D’ license out of the way, Opiyo can now look out for the ‘C’ license Coaching Diploma that will be floated in due course by the Football Kenya Federation (FKF).

The ‘D’ license classes kept Opiyo out of league games against Sofapaka, KCB, and Mathare United but he is now back in full training and will be available for the upcoming fixtures.

At the same time, stopper Timothy Muganda is anxiously waiting to return from injury. The former Soy United and Mara Sugar has not featured for City Stars since November.

He featured for Simba Wa Nairobi during the pre-season and played 13 out of 18 games, including all five in the inaugural pre-season Elite Cup where City Stars made it all the way to the final.

Muganda is now at the tail-end of rehab and will soon be allowed back to full training, according to team physio Brian Odongo.

“I have been out for a while but I am now fit and ready to get back to the field. I can’t wait to sample the Premier League, but more so, to help the team achieve positive results,” said Muganda.