The world championships are set for Azerbaijan in May this year while the quadrennial Africa Games will be held in Ghana, in August.

• A total of 106 men and 43 women athletes took part in the trials, which attracted teams from Mombasa, Nairobi, Kisumu, Bungoma, Kwale, KDF, Kenya Prisons and Kiambu graced the show. 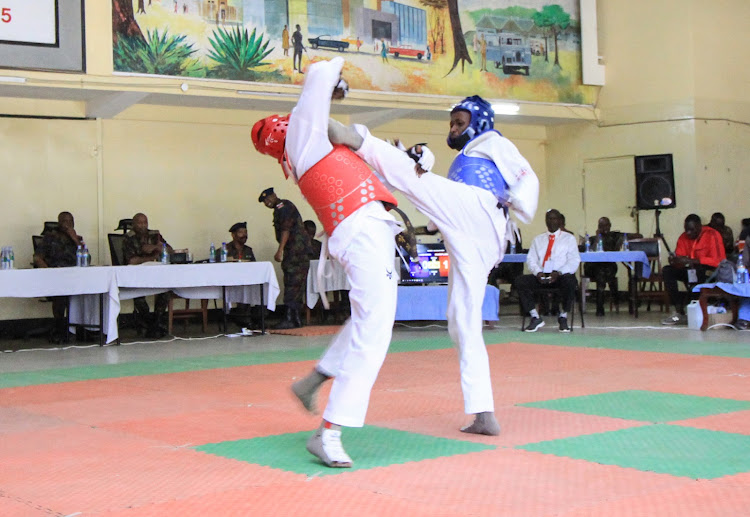 Edwin Lemiso (R) competes against Moses Maina in a past championship.
Image: /FILE

The national taekwondo team is set to begin semi-residential training next month in preparation for the World Championship and the Africa Games.

The world championships are set for Azerbaijan in May this year while the quadrennial Africa Games will be held in Ghana, in August.

The Kenya Taekwondo Federation held trials last Saturday at the Kenyatta University main campus with 15 athletes selected in both categories after the rigorous day-long event.

"The trials met the required standards and the turnout was encouraging. For the first time, we had a large number of women participants which is a move in the right direction."

"It will be ideal to first start with a semi-residential camp before we can think of assembling the athletes to train as a unit."

Agnes Njeri under 48kgs, Cynthia Wekesa under 49kgs, Mary Muriu under 52kgs and Doreen Matekwa under 57kgs booked their slots. Others are Beijing 2008 Olympian Milkah Akinyi who beat Caroli Awino to triumph in the under 62kgs category.

Pauline Zawadi (under 67kgs), All Africa Games bronze medalist Evelyn Aluoch (under 73kgs) and Faith Ogallo (73kgs and above) also made the cut.

In the men's category, Daniel Ndiwe won the under 54kgs division with   Wycliffe Okoth reigning supreme in the under 58kgs. Michael Ochieng ruled the under-63kgs level.

KDF's Lemiso Leshao claimed victory in the under 68kgs. The under 73kgs group saw Evans Oduor bag the sole slot while Robert Omondi and Elijah Kimani won in the under 80 and over 84kgs respectively.

The Foreign Affairs CS on Friday met the Kenyan Embassy staff in Seoul.
News
2 months ago

Kickboxing has potential to grow if federation wakes up- Master

Since its inception into the country in 2004, the sport has struggled to find its way through to the top and things seem to get harder and tougher as ...
Sports
1 month ago
Post a comment
by EVANS OUSURU
Sports
25 January 2023 - 05:00
Read The E-Paper