Tanui patches things up with Gebre, 30 years after shoe drama in Stuttgart

Tanui said athletics and sports in general have the power to bring people together.

•The Kenyan track sensation was the first man to run a half marathon in less than an hour (59:47) in Milan in 1993, a record that was later broken by compatriot Paul Tergat.

•Tanui recalls a candid conversation with coach Limo on the eve of the race in which they agreed to go all out to destroy their opponents and win gold for the country. 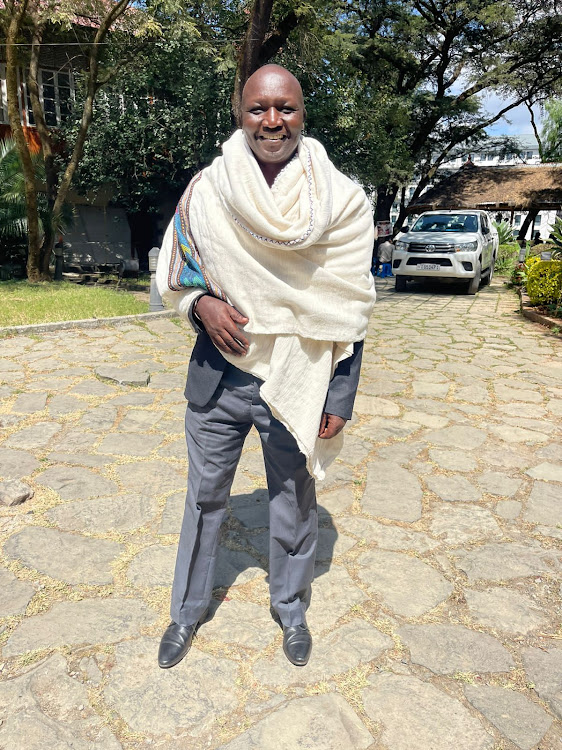 Tanui, a two-time Boston Marathon champion, was on course to defend his 1991 title when Gebrselassie edged him out on the home stretch for the gold medal.

The Kenyan track sensation was the first man to run a half marathon in less than an hour (59:47) in Milan in 1993, a record that was later broken by compatriot Paul Tergat.

Tanui, along with other athletes, went to train in St. Moritz, Switzerland, as part of his preparations to defend the title.

“After Moritz training, I came for national trials for World Championships because I love this country. Kenya has a good system in place that allows every athlete to compete,” Tanui said in an interview.

"I finished second in the trials behind Richard Chelimo, and we advanced to the Stuttgart finals after running the fastest time in the semifinals," he said.

Tanui recalls a candid conversation with coach Limo on the eve of the race in which they agreed to go all out to destroy their opponents and win gold for the country.

The late Limo informed me that he was exhausted and that I should represent the country at the finals as everyone was expecting me to win gold after excelling in 1991.

"As the race picked up speed, Gebrselassie and I were in the front pack. Unfortunately, he stepped on my shoe just before the bell, which caused me to lose my rhythm because I couldn't pause to tie my shoelaces. Tanui was incensed that he had been denied victory.

“Everybody knew about the gold theft. The incident haunted me for a long time but I have since learned to let go of my anger. This is sports and if you have bad luck, someone else takes the pride,” explained Tanui.

Tanui said after the unfortunate turn of events, he switched from running on the track to marathons and never competed again for Kenya because he was furious that no one from his country was able to pay the jury US$100 to appeal the verdict.

“I was robbed, so I still consider my silver as gold. I had the money that day, but the government, not the athlete or the coach, can appeal through the federation.

"The representatives from Athletics Kenya should have been there to file a complaint, after which the jury should have convened to decide the way forward.

"Kenyan officials let me down and prompted me to quit track because nobody supported me when I most needed them. How can you represent a country when no one cares about you?

The good news is that Tanui and Gebrseleassie have since patched up their differences. After thirty years, they reconnected during the Ethiopian Great Run 10km road race in Addis Ababa.

"I invited Gebrselassie to the Eldoret City Marathon two years ago over the phone. Unfortunately, he sent a delegation instead of showing up. He is a terrific individual in my eyes, just like every other elite athlete who has raised his banner with several records.

"I respected him, and he ought to visit Kenya for the sake of sport. However, he invited me to the Ethiopian Great Run 10km last year, so I attended. We had productive conversations after our victorious race," he remarked. Does he still feel animosity toward the Ethiopian hero? 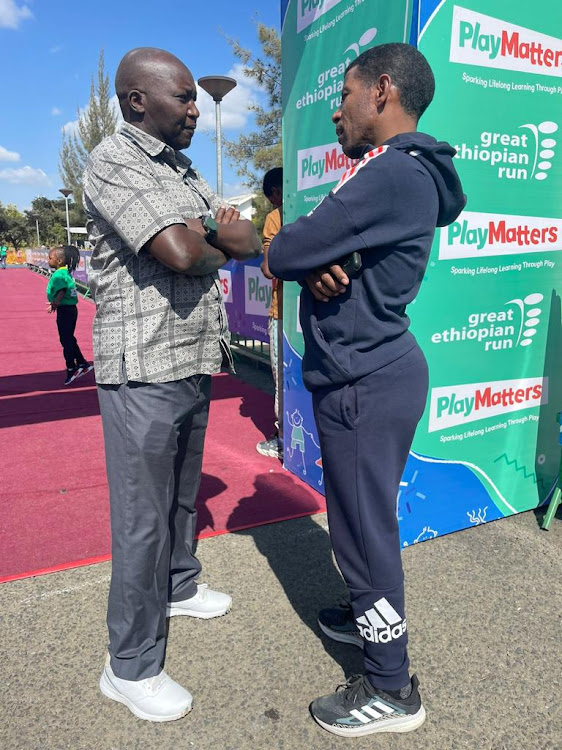 “I have answered this one question several times. We can't endure rage forever. Because Africa is a fantastic sporting continent, our goal is to unite Kenya and Ethiopia," he said.

Tanui asserted that they competed for the national flag as opposed to the current generation, who break anti-doping laws to compete for money.

"I used to log more than 150 km of weekly training. Although I had a few hours to spend at church, everything was training. If you put in the effort, our bodies will succeed," stated Tanui.

He continued by saying that athletics and general sports have the power to bring people together. "If I had the authority, I could merge the ministries of sports, tourism, and culture into one."

A previous winner of the Vienna marathon, Tanui said once he retired, he considered what he could do to help the community. He finally came up with the idea of starting the Great Rift Valley Cross Country, which was later to become Discovery Kenya Cross Country.

“The race was purely for junior athletes because I wanted to encourage children under five. “We held the first race in 1991. From that time, the race is held on the last Sunday of January every year. Initially, I planned to nurture children but later we changed the system and we now have senior athletes,” he said.

He was active in the Standard Chartered Marathon in addition to starting the cross country.

"I was contacted by the managing director at the time to offer advice on how to run a marathon efficiently. I informed him that the tarmac is used for marathon races. In contrast to the first edition, which was hosted in the forest, the second edition was staged on the tarmac," he explained.

Tanui worked on creating the Ndakaini Dam Half Marathon as well. 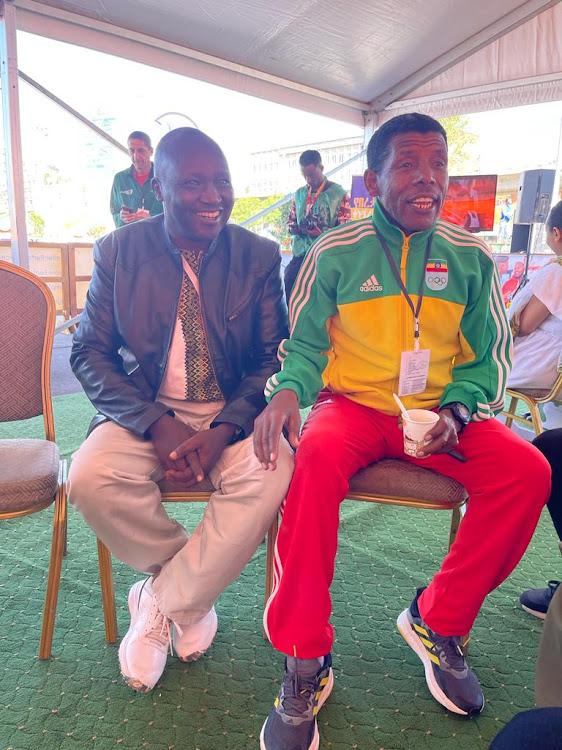 "I was not heavily involved in the succeeding editions because Ndakaini is far from Eldoret. The Family Bank Half Marathon was then started in Eldoret after which I participated for two years before departing. The issue is that many individuals tend to misunderstand your vision when you are very rigorous about what needs to be done for a successful race."

He added: "I coordinate both track and field events and marathons. I can still clearly recall planning a track and field event at Eldoret. We finished the finals before one o'clock because we were on time. That is the expertise I possess, particularly in terms of time management."

He also started the Kapkenda training camp, but he was unable to continue since it became difficult to supply needs like food and transportation after parting ways with Dr. Rosa.

"Having a camp or a house is pretty simple, but providing the athletes with food and evicting them from the camp is challenging. We had a large number of female athletes at the camp, including Vivian Cheruiyot and others. Our efforts to transform the lives of women in the running industry marked the beginning of the end."

"I recall how many people used to fear the Fila runners when we used to compete in events around the nation. Even in the tea estates, we used to train all over this area. This generation is missing out since we did all necessary to be successful," he said.

In addition, he founded the Eldoret City Marathon and the Kass International Marathon."I met the chairman of Kass Media, who used to organize football tournaments, but I told him that I don't understand anything about football. He asked what I could do best, and I replied that starting a marathon was a better idea. One of the managers told him they could do without me, so I left," he recalled.

After he had left, he continued to convince his friends to start a marathon. In 2016, he collaborated with Andrew Chelogoi and launched the Eldoret City Marathon.

The concept was embraced by Jackson Mandago, a former governor of Uasin Gishu, and the first edition took place in 2018. 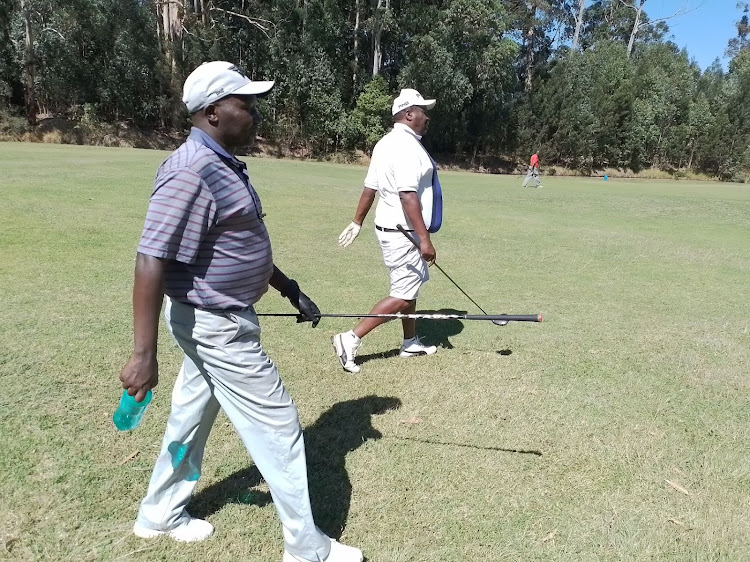 Moses Tanui alongside David Maiyo during a morning training at the Eldoret Club
Image: EMMANUEL SABUNI

"The sponsors were eager to support the race when we first pitched the idea to them. We face a lot of obstacles right now, but I am confident we will overcome them. I want to outlive this marathon. In a similar vein to London, I won the Boston Marathon on its 100th running, and unlike London, none of the original race organizers are still alive.”

Regarding his retirement, he claimed that he did not leave athletics but rather took a vacation from active running but was unable to resume it because of advancing age and the emergence of younger competitors.

"Also, if I retired, I would no longer be able to plan races around the nation. I try my best to serve people and give back to society in all the ways that I can.

He said amid laughter, "I could not do anything else that will make me happy that I understand best. After active athletics, he ventured into golf.

"I joined golf since I had no other sport to play after taking a sabbatical. Rugby, football, or any other sport was not an option for me. I realised that at my age, golf is the only sport I can still play. I want to see Kenyan golfers competing at the Olympic Games, just like I do with athletes in sports.

"What I like about Kenya Golf Union is that they have a junior program similar to the Junior Golf Foundation. If we develop young, bright players into professional golfers, golf will pose a threat to the world in the future. Before I depart this earth, I would like to watch Kenyans play gold at the Olympics. Tanui founded and serves as president of the Kenya Olympian Association (KOA), an organization that supports all Olympians, in addition to athletics and golf.

He said that anybody who has represented Kenya at the Olympic Games qualifies to be a member.

"All Olympians are encouraged to join the association by registering. We have roughly 500 right now, which is still a pretty tiny quantity," he said. 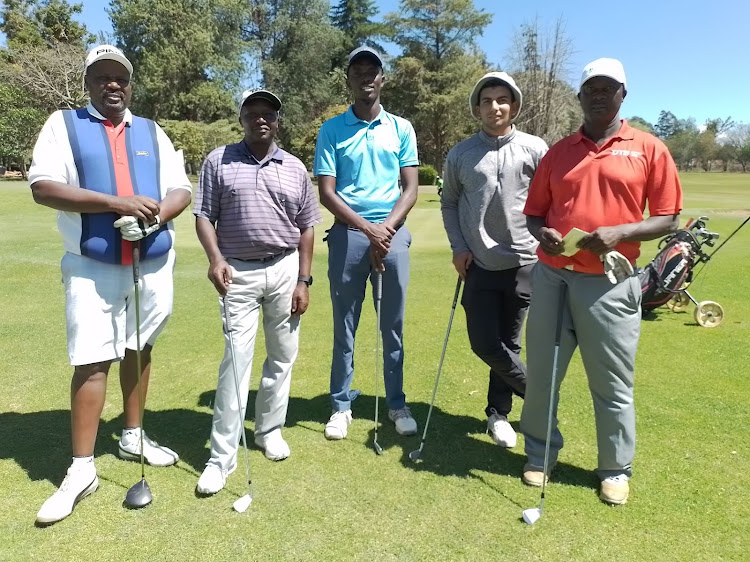 "We also want to create a museum that will feature the footwear worn by every Olympian, dating back to the late Kipkurgut Chumo. We also want to offer advice on how an Olympian ought to operate.

"Show people how to do it right. Around the world, the Olympics are a disciplined sport. Additionally, we want to encourage all of the federations—not just a select few—to send athletes to the Olympics. We have an organized association," he remarked.

He continued by saying that although they have not yet taken any action despite being recognised by the World Olympians Association, they will be attending a meeting and launching the programs.

You receive OLY, the honorary moniker if you register. I'm pleading with all Olympians to sign up so they can receive a certificate of achievement," he stated.