The sleuths have finished last in the past four edition of the four-team competition but coach Daniel Bor tipped his charges to silence critics.

• Bor said DCI must cut short the dominance of Kenya Prisons who have won the past three editions of the national league.

• DCI take on KCB today and entertain Kenya Pipeline on Saturday before settling scores with Kenya Prisons the following day. 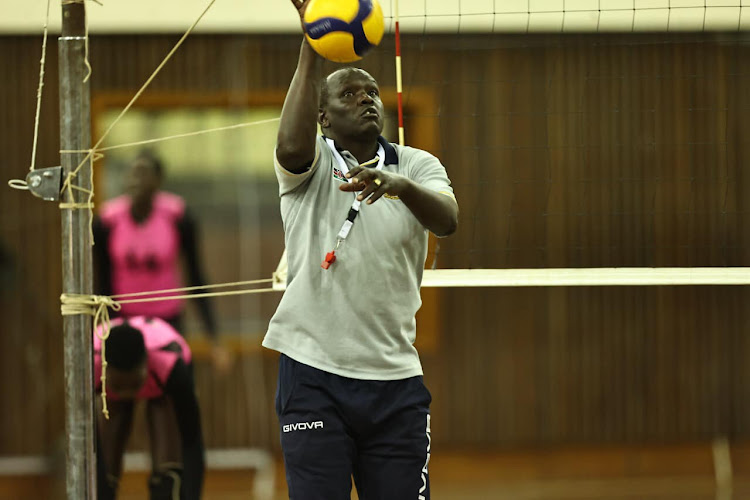 DCI coach Daniel Bor during a training session ahead of the playoffs
Image: HANDOUT

The Directorate of Criminal Investigation must shake off the underdogs' tag in order to upset the form book in the playoffs, starting today at Kasarani Indoor Arena.

The sleuths have finished last in the past four editions of the four-team competition but coach Daniel Bor has tipped his charges to silence critics.

Bor said DCI must cut short the dominance of Kenya Prisons who have won the past three editions of the national league. "We are no longer pushovers if our training at Kasarani is any barometer," Bor pointed out.

"People have already ruled us out even before stepping on the court but they will be in for a rude shock. We are not outsiders or dark horses as people claim. Our mission here like other teams is to win the league and nothing else. Kenya Prisons has dominated the league but we want to break that sequence," Bor maintained.

He went on: "I understand the thinking. Pipeline have topped the league but it's no guarantee they will win the title. KCB are the reigning African Club Champions but this is going to be a different ballgame altogether."

DCI take on KCB today before entertaining Kenya Pipeline on Saturday.  They wrap up the playoffs against Kenya Prisons the following day.

Kenya Prisons, who welcome back experienced setter Joy Luseneka, have a date with Kenya Pipeline (Friday) before rubbing shoulders with KCB and DCI respectively.

Prisons coach Josp Barasa said: "The return of Luseneka who brings the X-factor could not have come at the best time. We now must utilise our experience. Setting has been an Achilles heel since Luseneka became unavailable and we can now dare our opponents to underrate us at their own peril."

"We have dropped a lot of points that saw us finish fourth. The result still hurts but we have to justify why we have been unstoppable in the last few years. Physically and mentally, the girls look sharp. We won't let the title go without a fight."

Pipeline are unbeaten this season. The team will look to reclaim the title they last won in 2017. The Paul Gitau-coached team are a force to reckon with but must be at the top of their game in order to have a successful end to their season.

Headcoach Japheth Munala said the collective effort will be key if the bankers wish to add another trophy to their cabinet.
Sports
3 weeks ago

The team is trying to get their act together ahead of the three-day championship slated for January 20-22.
Sports
3 weeks ago
Post a comment
by EVANS OUSURU
Sports
20 January 2023 - 05:00
Read The E-Paper