Mandonga stole the show in Nairobi with his good-humored pre-match banter and eventually his sweet victory in Nairobi which went viral on Kenyan social media.

• If I fight Mandonga, he’ll surely not last a minute. He is lucky to have fought a rusty boxer. I’m ready anytime, any day to humble this guy-Okwiri. 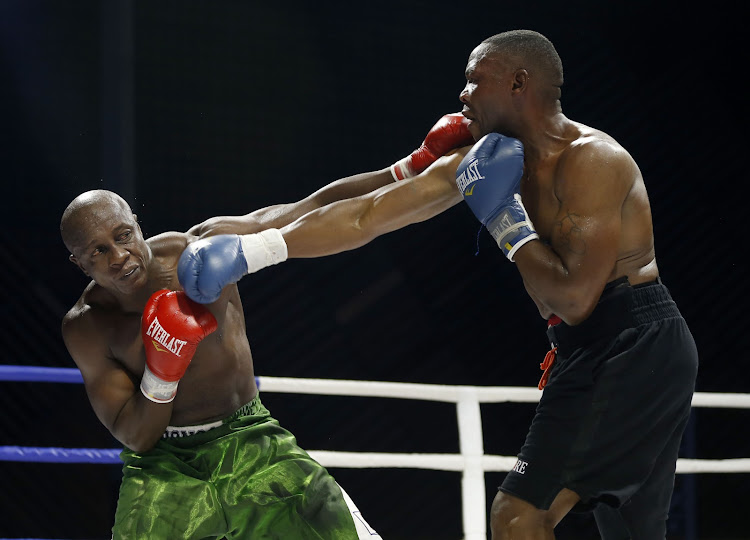 After defeating  Shabani Ndaro of Tanzania on points, Kenya’s Rayton Okwiri now feels obligated to silence the extrovert Tanzanian Karim Mandonga who has vowed to reign supreme over Kenyan pugilists.

Mandonga stole the show in Nairobi with his good-humored pre-match banter and eventually his sweet victory in Nairobi which went viral on Kenyan social media.

But Kenya Prisons Service’s Sergeant  Okwiri in the company of his uniformed colleagues at KICC Tsavo Ballroom dared the Tanzanian for a fight.

“If I fight Mandonga, he’ll surely not last a minute. He is lucky to have fought a rusty boxer. I’m ready anytime, any day to humble this guy. All in all, I wish to thank the Prisons Commissioner-General, Brigadier (Rtd) John Kibaso Warioba for creating an enabling sporting environment for us to further our careers,” said Okwiri after the match.

Mandonga could not be reached for comment following Okwiri’s post-match sentiments,

But Okwiri couldn’t be stopped from unleashing verbal blows against Mandonga, as he warned the Tanzanian that he will surely meet his waterloo should the fight come to fruition.

He stopped Kenya’s Daniel Wanyonyi in the fifth of the 10-round scheduled super middleweight main bout.

The Tanzanian tormented his ring adversary with heavy punches and showed spirited intentions of ending the bout early.

“I am happy that Kenyans have supported me and hyped the fight really well. The crowd and support was amazing and I truly never wanted to let them down,” remarked Mandonga in an interview with ring MC Shaffi Wetu.

Wanyonyi, on his part, conceded defeat and attributed his loss to a long layoff.

“I was really rusty as I had not fought for 5 years. I only got the opportunity to fight at the last minute and I felt quite rusty. The. Tanzanian was at his peak but I ran out of gas,” Wanyonyi who tasted defeat in a fifth-round technical knockout said.

There seem to be no strategy as Wanyonyi and Mandonga went all out from the gong, flying punches everywhere, but it was the latter who managed to land the most punches.

In the night’s penultimate bout, middleweight Okwiri buoyed by an enthusiastic home crowd won on a unanimous points decision against Shabani Ndaro of Tanzania in an eight-round scheduled bout. Judges Julus Odhiambo and Franklin Imbenzi scored it 80-72 for Okwiri while Charles Oloo had it 89-73.

From the first gong, Okwiri made heavy body shots but had his game plan destructed by the Tanzanian who spent the better part of the fight clinching him.

“How I wish the referee could stop him from holding me. I wanted to go for the kill,” Okwiri, who will fight a Congolese opponent in Mauritius on February 25, said.

Notably, Okwiri preserved the pain inflamed by a cut on his forehead that he sustained towards the end of the sixth.

But well-crafted fists of Okwiri captivated the jam-packed crowd at KICC and no eyebrows were raised in regards to his win.

In the super middleweight men’s four-rounder,  Lucien Botumbe of the Democratic Republic of Congo needed just  1.49 minutes after the second gong to knockout Adel Motean of Mauritius.

In the heavyweight category (bout number 7), James Nyariki of Kenya lost to Cedric Oliver from Mauritius by unanimous points.

Both boxers started off with quick exchanges but ran out of power in the second although Mauritius had an upper hand.

In the fourth, a dancing Nyariki caught his 99.6kg opponent with a ferocious left hook as the latter escaped what could have been a knockdown.

The fight was graced by several celebrities among them the fastest man in Africa  Fedinard Onanyala, former WBC Champion Fatma Zarika and retired US pro boxer Joshua “Poison” Onyango.

Okwiri has vowed to annihilate Tanzania's Ally Ndoro in their 10-bout none-title clash
Sports
3 weeks ago
Post a comment
by ATEKA
Sports
16 January 2023 - 05:00
Read The E-Paper