Queiroz talks up his Iran overachievers

•Iran, who are yet to reach the knockout stages at a finals, play England in their Group B opener on 21 November. 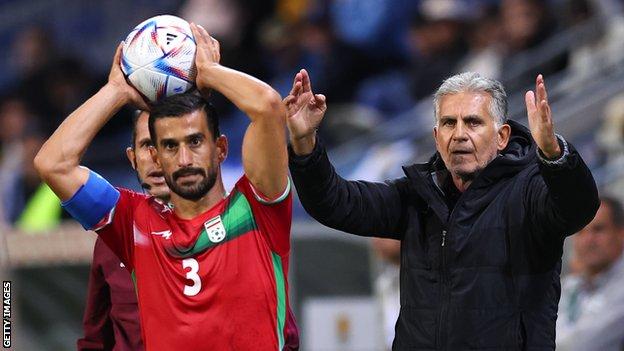 Carlos Queiroz has taken charge of more Iran games than any other manager
Image: GETTY IMAGES

Carlos Queiroz says he has never seen "players who deliver so much with so little" as he takes charge of Iran for a third consecutive World Cup.

Iran, who are yet to reach the knockout stages at a finals, play England in their Group B opener on 21 November.

They then face Wales and USA, who are just above them in the world rankings.

"The most important thing is not to make the other teams bigger than they are and we cannot be smaller than we are," Queiroz told BBC Sport.

"I have worked in many countries, worked with many great players - I have never seen in my life players who deliver so much with so little."

Queiroz is best known for his two stints as Sir Alex Ferguson's assistant at Manchester United as well as his time as Real Madrid boss, where he worked with a spectacular roll call of players including Zinedine Zidane, Ronaldo, Cristiano Ronaldo, Paul Scholes, Wayne Rooney and Luis Figo.

The 69-year-old also arrives in Qatar with an enviable CV to sit alongside almost four decades of coaching experience that includes two periods in charge of Portugal and managerial positions with South Africa, the United Arab Emirates, Colombia and Egypt.

Queiroz's unconventional use of gym mats has been credited for helping United beat Barcelona on their way to a Premier League and Champions League double in 2008, while his well-drilled Iran team narrowly failed to qualify from the group stage in the 2018 World Cup behind Spain and Portugal.

And it is that tactical astuteness that is likely to come to the fore when his side face the Three Lions as rank outsiders in Al Rayyan.

"We don't have any problems to understand that England are the favorites. But that is only theoretical and from the analysts' point of view."

The Mozambique-born boss is now in his second spell with Iran, with his first between April 2011 and January 2019 the longest managerial reign in the history of 'Team Melli'.

During that time his side set a record of 1,121 minutes without conceding a goal to qualify for Russia in 2018.

Those same defensive qualities were also evident in an impressive qualification campaign for Qatar that saw them concede just four times before Queiroz was reappointed in September.

"When people say 'you play very solid, very defensive' - no we need full concentration, full determination and to be organised when we don't have the ball. That's the way we should play the game because we don't have easy guys in front of us," added Queiroz.

"The important thing is to know that sooner or later they will not have the ball. We should play the game when we don't have the ball with a winning mentality.

"Every single morning the thing I tell my players is you need to beat yourself; you need to be better than yesterday. So when you have the players thinking in this way you relax."

Unfinished business and 'making the impossible a miracle'.

Iran began the 2014 World Cup in Brazil with a creditable a 0-0 draw against Nigeria before a late Lionel Messi goal condemned them to a 1-0 defeat to Argentina. A 3-1 loss against Bosnia-Herzegovina ensured they went out.

However, having reached the quarter-finals of the Asian Cup in 2015, Queiroz's side were unfortunate not to progress into the last 16 in Russia in 2018.

Overcome 1-0 by Spain courtesy of a fortuitous Diego Costa winner, winger Mehdi Taremi missed a late opportunity in the 1-1 draw against Portugal to send Iran through.

And while the former Real Madrid manager may no longer be dealing with galacticos, he can call upon the likes of Brentford's attacking midfielder Saman Ghoddos, Porto's Mehdi Taremi, Feyenoord's Alireza Jahanbakhsh and Bayer Leverkusen's Sardar Azmoun to provide attacking thrust.

Albeit he admits that at times he has had to take a leap into the unknown with his selections.

"Majid [Majid Hosseini, then Trabzonspor] was one player who jumped from no games to a World Cup against Morocco, Portugal and Spain," Queiroz added.

"You talk to European coaches about this, they say if he is not playing, I cannot call him, he's not ready.

"But when you are coach of Iran, if you don't have dogs you go with cats, you don't have any other options. This is the challenge, to bring kids and train them.