On the plane but not the pitch - the unused players

For some, the euphoria of a call-up can then be tempered by a lack of playing time

• Former Newcastle United midfielder Rob Lee was named on the standby list for Euro 96 before making the squad for the World Cup in France two years later, but only appeared as a substitute against Colombia in the group stage.

• He says that only a handful of places are up for grabs in any squad, and those who force their way in will always be on the periphery. 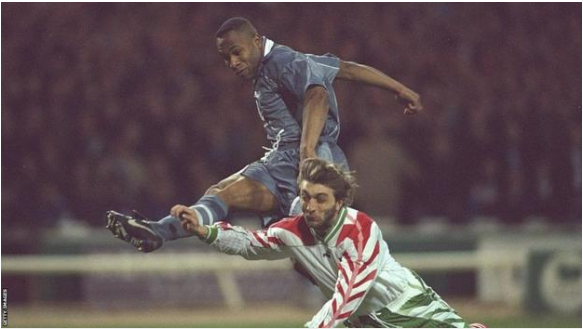 Major international tournaments are often described as the pinnacle of any player's career - but things don't always go to plan.

For some, the euphoria of a call-up can then be tempered by a lack of playing time. With only three matches guaranteed, involvement can be extremely limited or, for some, non-existent.

For the 2022 World Cup, with squads increasing from 23 players to 26, the likelihood is that a number of Gareth Southgate's England charges will be watching from the sidelines.

'Some players are set in stone'

Former Newcastle United midfielder Rob Lee was named on the standby list for Euro 96 before making the squad for the World Cup in France two years later, but only appeared as a substitute against Colombia in the group stage.

He says that only a handful of places are up for grabs in any squad, and those who force their way in will always be on the periphery.

"I made my debut when I was 28, that wouldn't happen now," Lee tells BBC Sport.

"When Glenn [Hoddle] took me in '98, I'd played wing-back for him, as well as sitting midfielder and pushing forward. My versatility got me in, but I knew I wouldn't be in the team unless someone got injured or there was a change in tactics.

"Some players are set in stone, it never changes. Regardless of what managers say, it doesn't go on how you perform.

"You want the team to do well, but you want a chance. Football is an individual sport within a team, a cut-throat business. But playing for your country is an honour and if you are part of a squad that wins a tournament, it is an amazing achievement."

'It was about being ready when called upon'

Despite going in to Euro 96 as reigning PFA Player of the Year after an impressive season at Newcastle, Les Ferdinand found himself down the pecking order of strikers under Terry Venables.

Alan Shearer had not scored internationally for two years, but he was selected to start alongside Teddy Sheringham, a decision vindicated as he went on to win the Golden Boot.

"Terry made it clear Alan was his choice, but I thought I'd get some game time," Ferdinand says. "It was about being ready when called upon. If you don't think you'll be the difference, you'll struggle."

With the game level against Germany in the semi-final, Ferdinand was pushing to go on but Venables held firm. England were knocked out on penalties.

"The fans were shouting 'get Ferdinand on', and Terry just folded his arms. I knew then it wouldn't happen. I don't think he thought me and Alan could play together."

"Venables had his way of playing and no matter what I did, that was the way he was going to go," Ferdinand adds.

"When I look back on it, I think my England career was hampered because he thought me and Alan couldn't play together, but we proved we could."

'Squads will be used more in Qatar'

There has been much debate around Southgate's picks for this World Cup, but Derek Fazackerley, England assistant at Euro 2000, says that selection for tournaments is based on more than performances at club level.

"England managers can only go on how a player has done for them," Fazackerley says. "International football may also be able to get more out of him than club football.

"There is more certainty in the international set-up. There are reasons to put some players in who are in better form, but do they know the players they are playing with? It is more than just present form."

Lee admits It can be difficult to stay motivated at a tournament as a fringe player.

"You have to find things to do," he says. "You are away from your family and you can't train every day because you have to rest. There is a lot of waiting around.

"Training with England is not as intense, especially at a tournament because games come fast. The management have to deal with that."

"In Qatar, the tournament is a little bit shorter and there is less time between games," adds Fazackerley.

"Squads will be used more if there is a day less to recover and the time of season is a factor, whereas in general, it would be more about the strongest 11 or 18 to win a game."

Ferdinand says retaining self-belief is key even if playing time is limited.

"I was confident. I knew I wouldn't start, but I felt I could have an impact," he adds. "I just thought 'I need to be ready when called upon'. Unfortunately, I never got on."