Verstappen dominated the race and his victory was never in doubt

•Leclerc, who was Verstappen's title rival earlier this year before Ferrari's season imploded in a flood of errors and reliability failures, held off Perez on divergent strategies to take second place.

•Sebastian Vettel's final race ended in disappointment, the four-time champion bemoaning when he felt was a poor strategy from Aston Martin. 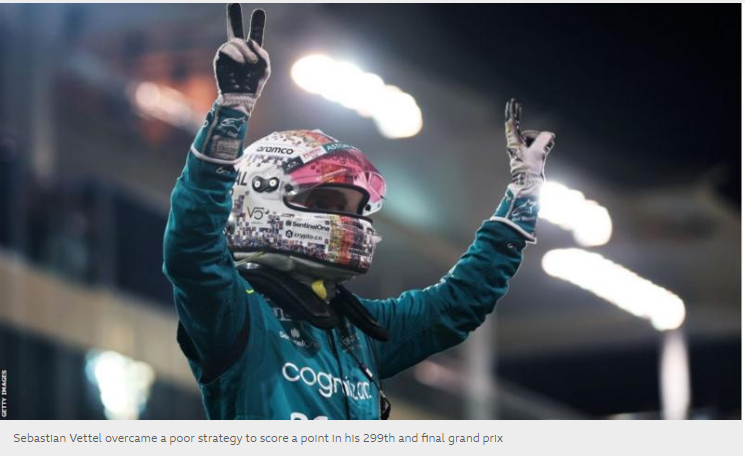 Red Bull's Max Verstappen won the final race of the season in Abu Dhabi as Ferrari's Charles Leclerc beat the Dutchman's team-mate Sergio Perez to secure second in the championship.

Leclerc, who was Verstappen's title rival earlier this year before Ferrari's season imploded in a flood of errors and reliability failures, held off Perez on divergent strategies to take second place.

Sebastian Vettel's final race ended in disappointment, the four-time champion bemoaning when he felt was a poor strategy from Aston Martin.

Hamilton's result means he has finished a season without a win for the first time in his career - ending a record only he held.

Verstappen's win was his 15th of 2022, extending the new record he has set this year for wins in a single season.

"It was a good race," said Verstappen. "It was all about tyre management. I think we looked after the mediums quite well and then on the hard tyres managing until the end.

"A 15th win of the season is unbelievable. It's been really enjoyable to work with the whole team and to be able to achieve something like this. I know it is going to be hard to replicate but it is also very good motivation to try and do well again next year."

Verstappen dominated the race and his victory was never in doubt but the fight between Leclerc and Perez made for a tense finish to the race.

Ferrari chose a one-stop strategy for Leclerc, the same as Red Bull with Verstappen, while Perez stopped twice.

That left the Mexican to come back from a 23-second deficit in the final 24 laps if he was to beat Leclerc in a fight that would be decided on whoever finished ahead, as they went into the race tied on points. 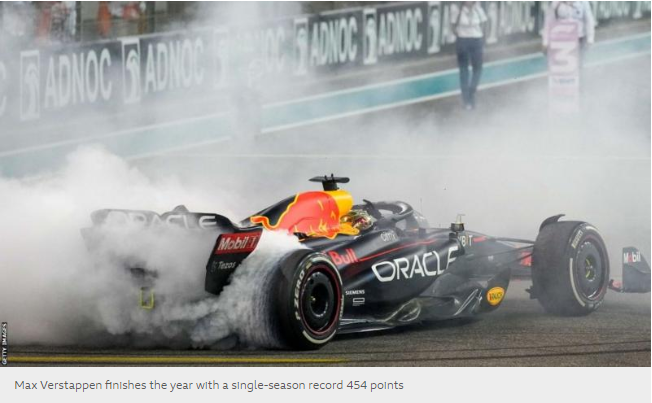 Perez closed on the Ferrari at a second or so a lap and more for a while, but Leclerc measured his tyres with skill to cross the line 1.3 seconds ahead.

Many will feel he deserves second in the championship, as he has driven an outstanding season, winning three races to Perez's two, and has had an inferior car to Perez for the vast majority of the year.

"We got it," Leclerc said over the radio, obviously delighted. "Good job, guys."

It was small consolation for Leclerc in a season in which he was 46 points ahead of Verstappen after just three races only to see his hopes evaporate in the following few events as Ferrari suffered a series of strategic errors and engine failures.

But Ferrari for once got their strategy right in Abu Dhabi.

They resisted the temptation to pit straight after Perez suffered a delay at his first stop and then traffic when he re-emerged - which would have given Leclerc a chance to stop the next time around and take second place.

Instead, they stuck to their pre-race plan of a one-stop strategy, and even dummied a pit stop to draw Perez, and made the one-stop work.

It was nail-biting for a while for Leclerc, especially as Perez took chunks out of his lead for several laps after his second pit stop, but he stayed calm and held on.

"It felt good, I was 100% sure we could do it," said Leclerc. "We had a perfect race for us. I knew the only way to beat Checo was with tyre management and strategy we had a one stop and it really worked.

"I really hope next year we can do a step forward in the championship - we will push on in the winter break to catch Red Bull." 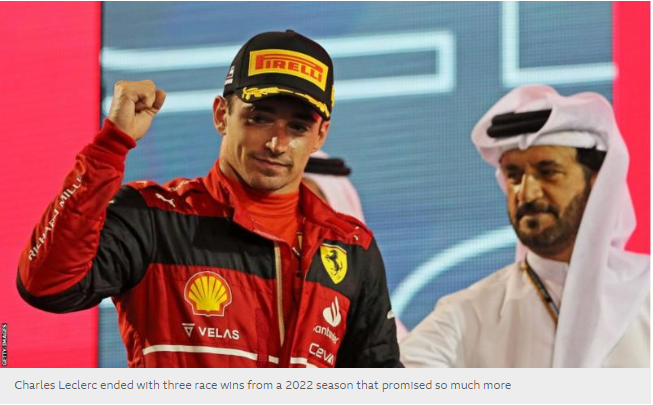 A difficult end for Mercedes

Hamilton had a dramatic start to the race. He passed Carlos Sainz's Ferrari off the line, only for the Spaniard to pass him back at the chicane at the end of the first long straight.

Hamilton then bounced over the kerbs at the corner - launching the car a metre or so into the air before crashing back. Hamilton felt the car had suffered damage, but Mercedes could not initially see any.

Hamilton cut the chicane and returned to the track in front of Sainz, only to be told he had to give the position back a couple of laps later.

Hamilton began to complain of a loss of power, and in tandem with over-working his tyres in his attacking first couple of laps, he lost pace and started to drop back and lost a place to team-mate George Russell.

Russell himself then had dramas, suffering a pit-stop delay, which led to an unsafe release in which he came close to colliding with McLaren's Lando Norris, and for which he was given a five-second penalty.

Despite his early problems, Hamilton was on course to finish fourth on a one-stop strategy like Verstappen and Leclerc until he suffered a hydraulic failure in the closing stages.

That promoted Sainz and Russell to fourth and fifth ahead of Norris and Alpine's Esteban Ocon, which meant Alpine's fourth place in the constructors' championship was confirmed, ahead of McLaren and behind Mercedes.