•But he said on Saturday that he was "not trying to make a statement" and explained that he was wearing the stud again on the advice of doctors after suffering medical problems.

•"I've had my jewellery and my nose stud for years and obviously we had that whole commotion at the beginning of the year," Hamilton said. 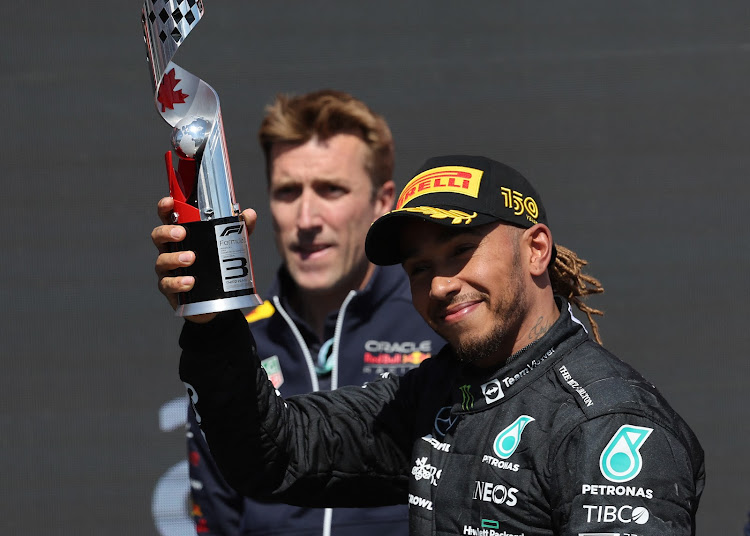 Lewis Hamilton has dismissed the ongoing controversy about his wearing a nose stud in his Formula 1 car as "all a bit silly" after the issue blew up again at the Singapore Grand Prix.

Hamilton's Mercedes team were fined €25,000 (£22,000) after qualifying for a procedural error in incorrectly filing out a scrutineering form saying Hamilton would comply with the regulations not to wear jewellery, only for him to do so.

Hamilton said when the issue first emerged at the start of the season that he felt singled out by governing body the FIA over the issue, as he is the only driver to wear significant amounts of piercings.

But he said on Saturday that he was "not trying to make a statement" and explained that he was wearing the stud again on the advice of doctors after suffering medical problems.

"I've had my jewellery and my nose stud for years and obviously we had that whole commotion at the beginning of the year," Hamilton said.

"At the time it was, like, soldered in, so it didn't come loose. They gave me, at the time for many races, an exemption so I could find a solution.

"Then I went to get it taken out and tried to find a solution, putting it in and out. It got infected because of that and I was just continuing on with this infection. I got a blood blister and had quite a sore on my nose. Then I went back [to the doctor]…

"This is all stuff I told them before qualifying. I went back and had to have the blood blister fixed, because there was puss and blood. I put this back in and in the last two weeks it's started to heal and they've asked that I keep it in.

"It's crazy that we're having to talk about something so small. I take everything else out. At this point, I don't really care to be honest."

Hamilton, sounding exasperated by the issue, said he had "tried my best" and pointed out what he saw as an inconsistency in the FIA's strict approach on the matter, which has emerged this season after years of jewellery being tolerated in the car despite it being against the rules for nearly 20 years.

"One of the best excuses I was given a long time ago was about heat and if you are in a fire metal conducts heat.

"But our suits are covered, our zip is metal, our buckle around our helmet is metal, we've got the wires with aluminium metal in them.

"So I don't know. It's all a bit silly. Hopefully they'll be sensible. The stewards should be there to keep us safe most importantly but this is not a safety issue."

All this was a bizarre and unexpected distraction from a weekend that has been dominated by another controversy - over whether Red Bull are one of two teams to breach last year's budget cap.

It is a widely held belief within the F1 paddock that Red Bull and Aston Martin are both likely not to be issued certificates of compliance when the FIA posts them officially on Wednesday.

Aston Martin say they are "in discussion with the FIA and awaiting certification".

Red Bull have reacted angrily to Mercedes and Ferrari discussing the issue publicly this weekend, after the allegations finally emerged in media reports after months of senior people in F1 being aware of them without it being publicly reported because of a lack of proof.

Ferrari have been careful not to name Red Bull at all in their comments. And while Wolff has mentioned his bitter rivals in his answers, he has not directly accused them of breaking the cap, even if that could be inferred from some of his answers.

The closest he came was in an interview with Sky television on Saturday.

In this, when asked about Red Bull team principal Christian Horner saying he was "not aware" of any breaches, Wolff said: "It's funny that Christian says that because it's weeks and months that they are being investigated, so maybe he doesn't speak to his CFO."

"If it's true that they've homologated a lightweight chassis this year, they may use it next year. So it's a real cascade of events that can be influential on all of the three championships."

This interview from Wolff has infuriated Horner, and his displeasure was clear in a news conference on Saturday, in which he accused Mercedes and Ferrari of defamation and claimed they had spoken on the subject to distract attention from the fact that Red Bull driver Max Verstappen has a chance of clinching the championship in Sunday's race.

"We take umbrage, and extremely seriously, the remarks that have been made," Horner said, "because, you know, is it any coincidence that Max has his first shot at winning a world title and here we are talking nothing but cost caps rather than the phenomenal performance that he has had this year.

"And I think it's an underhand tactic that has been employed to detract from perhaps a lack of performance on track this year. And of course, when references are made to last year, this year, next year we're going to take that extremely seriously."

Asked later whether he was concerned about being sued, Wolff said: "It's noise. There is a process. On Wednesday there are going to be certificates of compliance issued or not and then if someone is not there is a process and governance in place, and for me it is 100% sure the FIA is gonna do the right thing. It's chatter until then.

"It is important the cost cap is complied with. It is a cornerstone of the new regulations and I very much hope all the teams have done that.

"We know exactly that we are spending $3.5m a year on parts we bring to the car and then you can say what difference it makes to spend another $500,000.

"We haven't produced lighter parts for the car to bring us down from a double digit overweight because we simply haven't got the money. So we need to do it for next year's car. We can't homologate a lightweight chassis and bring it because it is $2m we would be over the cap. So you can see every spend more has a performance advantage."

Red Bull have not introduced a lighter-weight chassis this weekend, as it has been speculated for some time they might, and Horner has told BBC Sport that Red Bull have introduced fewer development parts than Ferrari and Mercedes this season.

Red Bull continue to insist that they "stand absolutely 100% behind (our) submission (to the FIA), that we are below the cap".

And then there's the fuel issue

All this back and forth has intensified an atmosphere that is always oppressive in at least one way at this race, owing to the tropical heat and humidity. And Horner is certainly right to say that it has distracted from the on-track battle.

So, in the context of a weekend in which Red Bull's well-worn modus operandi of pushing absolutely everything to the limit was the centre of attention, it was perhaps not the ideal time for this to be underlined by an error by the team in qualifying.

Verstappen looked on target to take pole, but he and the team failed to take advantage of his blistering pace in the final part of qualifying.

Verstappen was on one lap that was likely going to be good enough for pole towards the end of the session, only to be told to abort because there was just time to get in another one, when the drying track would be in even better condition.

The team had failed to notice that the car was running short of fuel and they had to call Verstappen into the pits at the end of his final lap - which would certainly have beaten Ferrari's Charles Leclerc to pole - to avoid being in contravention of a rule that requires enough fuel to be in the car for a one-litre sample to be given to stewards.

This is, incidentally, a rule the team fell foul of in Abu Dhabi some years ago, when they were handed the standard penalty of being disqualified from qualifying.

Verstappen was furious afterwards, swearing at the team over the radio. He had no regrets about his criticism, he said later, "because that is how we keep each other heading in the right direction. Because we don't want to be good, we want to be perfect".

Verstappen has appeared capable of winning from anywhere in recent races, doing so from 10th in Hungary, 15th in Belgium and seventh in Italy.

But he believes that eighth in Singapore is too far back to repeat the feat.

"Its a bit like Monaco," he said. "You cannot really pass.

"We have been to tracks where passing is possible. This one is going to be a bit different, a bit more frustrating. But I know that once I jump in the car I will give it everything I have. Of course I try to move forward. But I don't really see a podium or a win."

If he did manage it, he was asked, would it be the most special win of the year?

"Yeah," he said, "but I don't even want to think about that because it is very, very difficult."

A win is the minimum result he needs to clinch the title this weekend, but to do so he also needs other results to go his way. One of them is for Leclerc to finish near the bottom of the top 10, and the Ferrari driver starts on pole.

Leclerc said: "Realistically it is a matter of time before Max gets his title. It is important to win as many races as possible before the end of the season.

"We will just focus on ourselves try to use the races in the best way possible and try to maximise the package as much as possible. This is important to me, the rest is. I don't care…"

Hamilton, third on the grid after his best qualifying result of the season, is also on the hunt for a win, along with Red Bull's Sergio Perez, alongside Leclerc on the front row. And Fernando Alonso says he wants to "dream big" and aim for a podium from his excellent fifth place on the grid for Alpine.

Singapore tends to be a slow-burner, but this weekend has had plenty of fire already.

Mercedes failure to win not end of the world, says Hamilton

The seven-time champion and team-mate George Russell have yet to win this season with six races remaining.
Sports
1 month ago