England and Italy now reconvene in one of world football’s most iconic arenas, the San Siro, with that Euro final seeming an age away and both countries hoping to banish memories of poor results in their last games.

• Gareth Southgate’s England can at least use these two Nations League games against Italy and Germany to avoid the embarrassment of relegation from their group but also as sighters for the forthcoming World Cup in Qatar in November.

• England also need to arrest a slide of four games without a win, their worst sequence since 2014, when they went five matches winless under then manager Roy Hodgson. 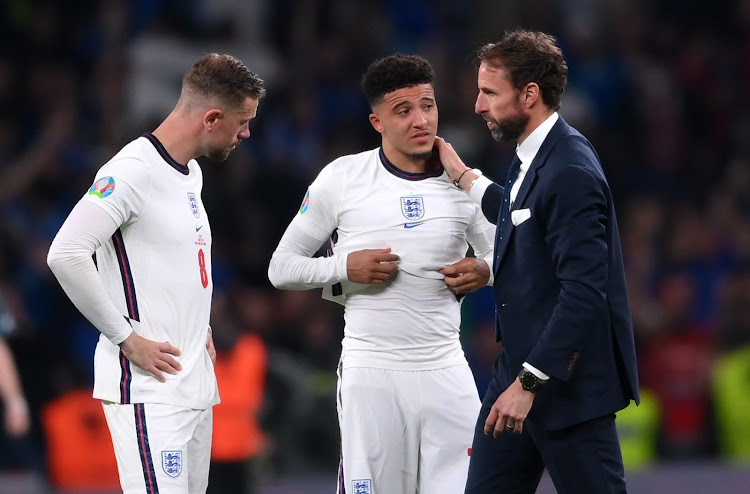 England meet Italy here in Milan 439 days after the Euro 2020 final at Wembley that brought despair on the pitch accompanied by bitterness and recriminations off it and with both now seeking to regain lost momentum.

The bare facts state that England suffered the familiar fate of defeat on penalties after a 1-1 draw, the disappointment sharpened by the loss being on home turf and after a 55-year wait to reach a major final.

It was a day when what should have been a celebratory occasion was scarred by chaotic scenes caused by widespread hooliganism, a lack of crowd control as barriers were stormed by ticket-less England fans, and then the racist abuse suffered by Marcus Rashford, Jadon Sancho and Bukayo Saka after they missed penalties in the shoot-out.

England and Italy now reconvene in one of world football’s most iconic arenas, the San Siro, with that Euro final seeming an age away and both countries hoping to banish memories of poor results in their last games.

Gareth Southgate’s England can at least use these two Nations League games against Italy and Germany to avoid the embarrassment of relegation from their group but also as sighters for the forthcoming World Cup in Qatar in November.

In contrast, Italy’s fall from grace after their deserved night of Wembley glory has been so swift and painful it will see them watching the game’s biggest showpiece from afar after losing a World Cup play-off to the minnows of North Macedonia in Palermo.

Italy coach Roberto Mancini had enough credit in the bank with the Euros win to survive that humiliation but all eyes will be on his side after they lost 5-2 in Germany in their last game, the first time anyone had put so many goals past the Azzurri since 1957.

England also need to arrest a slide of four games without a win, their worst sequence since 2014, when they went five matches winless under then manager Roy Hodgson.

They have played 13 games, winning seven, drawing four and losing two since being defeated by Italy at Wembley. There is no question the optimism and national fervour that accompanied Southgate and England on their journey to the Euro 2020 final has been diluted over time, the sense growing that failing to win a major tournament on home soil must now be viewed as a huge missed opportunity.

Have England actually moved forward since they lost to Italy? They have not exactly presented a compelling case to suggest they have.

Southgate, for the first time, felt the full wrath of fans after their last game, the 4-0 loss to Hungary at Molineux in June, the atmosphere laced with vitriol as what had previously been off-stage chuntering about his perceived conservative approach burst noisily into the public domain.

Chants of ‘You don’t know what you’re doing echoed around Molineux, notoriously short memories in evidence once more after Southgate guided England to the World Cup semi-final in Russia in 2018 before the Euro 2020 final, thus proving he does know what he is doing. England captain Harry Kane expressed his disappointment after being asked about the manager’s position.

Southgate is as safe as it gets as England manager. The Football Association admires his character, record and everything else he brings to the organisation. If he does leave it will be at a time of his choosing barring something extraordinary, having signed a contract taking him through to December 2024.

He cut a more world-weary figure than usual after the Hungary defeat when almost everyone involved in those Nations League games looked to be suffering from football fatigue, Southgate even creating a stir when he said at one point: “I won’t outstay my welcome.”

There is no question the summer results were mediocre, including a grim goalless draw with the Italians behind closed doors at Molineux, and Southgate has emerged from a period of reflection with the admission he may well have got things wrong.

Speaking at the England team hotel in Milan, Southgate said: “I felt I compromised certain decisions internally and you don’t win if you compromise. It was good for me to sharpen that focus again what we’re going into we’ve got to be completely ruthless and I’ve got to create an environment for the players that allows them to excel.”

He refused to reveal the areas of compromise that troubled him but it was clear Southgate had learned lessons from an unfulfilling summer experience.

Southgate unquestionably needs performances and results in these next two Nations League games to dispel the notion that England may have squandered their big chance at Wembley on that humid night of mayhem in July last year, that circumstances are unlikely to fall as favourably again for them any time soon.

The World Cup will do much to shape how his time as England manager will be viewed along with his legacy. Expectations that had plunged after dismal efforts in major tournaments under Fabio Capello and Hodgson have been raised by what Southgate himself has achieved.

Southgate, it should not be forgotten, also inherited an England side in disarray after Sam Allardyce’s ill-fated one-game reign. This reservoir of goodwill can run dry quickly, even for managers with a long list of honours, so these two Nations League matches will carry significance in forming the mood ahead of the World Cup.

Of immediate concern to Southgate is finalising his squad to take to Qatar, with only these two games before he assembles the list of those he hopes will prove his England are not nearly men and can finally claim the major prize that has eluded the men’s team since 1966.

Brentford striker Ivan Toney was his standout selection and he joins Tammy Abraham in the battle to be captain Kane’s understudy, while Jude Bellingham’s brilliant Champions League performance for Borussia Dortmund against Manchester City last week only increased the clamour for a place in the starting line-up.

The absence of first-choice keeper Jordan Pickford through injury means Arsenal’s Aaron Ramsdale, in goal for the 4-0 loss to Hungary, Newcastle United summer signing Nick Pope and Dean Henderson, on loan at Nottingham Forest from Manchester United, will want to push their claims to be next in line.

Manchester United captain Harry Maguire’s involvement will also be under intense scrutiny after he was dropped by manager Erik ten Hag following a poor start to the season, Southgate’s loyalty to a player who has served him well ensuring he was in the squad.

Italy present a formidable barrier, especially at home, and it will be a real lift to confidence if England can come away from the San Siro with a satisfactory result, preferably a win, to blow away the cobwebs of Molineux.

Henderson, 32, was not named in Gareth Southgate’s initial squad because of a hamstring injury.
Sports
4 days ago
Post a comment
WATCH: The latest videos from the Star
by Phil McNulty
Sports
23 September 2022 - 21:00
Read The E-Paper