Mombasa Golf Club Course is gazetted among the top 100 historical sites by the National Museums of Kenya (NMK). 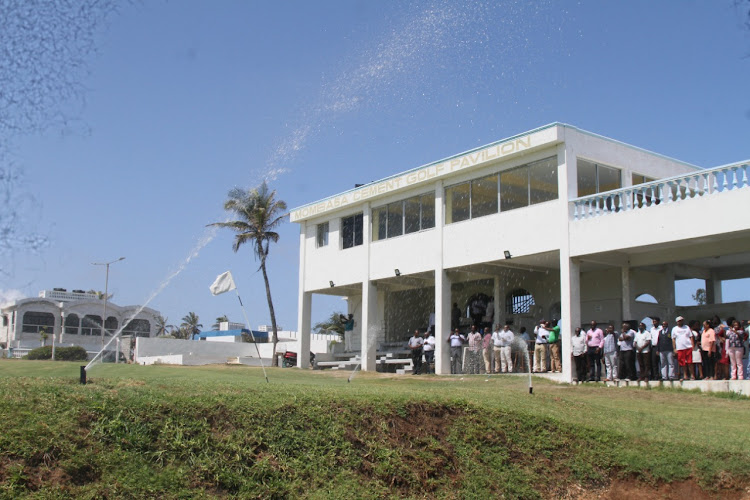 The historical nine-hole Mombasa Golf Club Course, which was established in 1911, is under-going a facelift after being fitted with Sh20 million irrigation system.

The golf course, which is located along the coastline overlooking the Kilindini channel, is next to the Mama Ngina Waterfront Park, which was rehabilitated in 2019 at the cost of Sh450 million.

In 1997, Mombasa Golf Club Course was listed and gazetted among the top 100 historical sites by the National Museums of Kenya (NMK).

The course has been undergoing a number of redevelopment projects over the years with the latest being the installation of an irrigation system to water the grass.

“We have been talking about the irrigation project for over the last 20 years, but today, we are happy we are actualizing it,” said Mwangi.

Mwangi said the project began in 2020 during the Covid-19 period by raising money from club members and other well-wishers.

He said phase 1 of the project involved the installation of the irrigation system and phase two will be a little bit more technical as they are planning to install a desalination plant to convert the salty sea water to fresh water that will be used to irrigate the course.

“When I took over with my board, we agreed with members that it was time to act as we had talked about this project for long,” he said.

Paul Munyao, the club vice chair said Phase One, which began October last year, involved laying of pipes, digging of trenches and having the sprinklers installed.

“Phase One cost us Sh10 million and took one year to complete and we hope Phase 2,  which is a bit technical will also last a year at a cost of Sh10 million,” said Munyao.

Munyao said that due to the course’s strategic location along the sea, they opted to install a desalination plant to create fresh water from the seawater to be used to water the course.

“We intend to use the reverse osmosis process to convert the water because seawater is saline and can't be used to water the grass,” he said.

Currently, the club is using rainwater harvested in the 33 million-litre capacity dam located in the middle of the course. Munyao said this was still a challenge since it does not rain regularly in Mombasa.

He said because they need to irrigate the course for two hours non-stop twice a day, they require a minimum of 45,000 litres of water for one round.

He added that with a greener golf course, they expect the number of tourists visiting the club to increase given that being gazetted as a national heritage site by the NMK already put them on the map as a tourist attraction site.

“We normally get tourists who come to our clubhouse not just to dine, but also play golf and tour around, and with a scenic view, we hope to attract more people who want to host events like concerts,” Munyao said.

The works are being undertaken by Turf Machinery and Irrigation Limited (TMI) who were given the contract.

The contractor and lead engineer Philip Ochola said that work began in 2016 with designing the whole irrigation system.

“This was up until last October when the works were officially launched. The first phase that was opened today involves opening the valves manually. But we are looking at the next phase, which is to automate the irrigation system which our golf course is moving towards,” said Ochola.

Ocholla, a golfer too, is currently the vice chair of the Kenya Golf Union (KGU). Present during the ceremony included former chairmen, including IEBC chair Wafula Chebukati, who left the position as Mombasa Golf Club chair in 2002.

Chebukati also served as captain, vice-captain, secretary and committee member of the club.

“Mine is just to say well done, I went all the way from member up to chairman and I believe that’s the way to go. To the new members please serve your club and make your contribution seen,” said Chebukati.

Post a comment
WATCH: The latest videos from the Star
by ONYANGO OCHIENG
Sports
22 September 2022 - 05:00
Read The E-Paper