BACK IN THE FOLD

• In girls’ basketball, Tigoi were 71-63 winners against Butere Girls with head coach Ken Egovwa promising a charged and hardworking team at the finals. 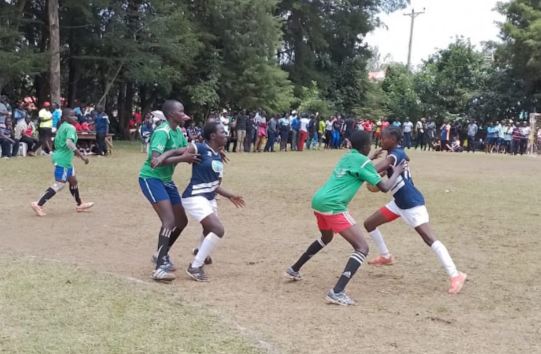 Friends School Kamusinga basketball team will be hoping to make an impact upon return to the Kenya Secondary Schools Sports Association national championships after 13 years in the cold.

“These guys have been locking us out of the championships for so long but we have managed to come out with victory today. We hope to improve our skills ahead of the national championships,” said Makokha.

In girls’ basketball, Tigoi were 71-63 winners against Butere Girls with head coach Ken Egovwa promising a charged and hardworking team at the finals.

“After today’s victory, we have learnt our lessons and we shall rectify where we think we went wrong to help us compete well at the nationals come next week,” said Egovwa.

Head coach Isaac Muresia Nicholas said that they had to change their tactics.

“At the pool stage, they had one player who tormented us but after discovering his strengths, we had to change our model of play to contain him,” said Muresia who hopes to improve on their bronze medal at the nationals in their bid for a ticket to the East Africa School Games.

Mwitoti's coach Lawrence Aswani said: “This is our maiden championship from the county and qualifying for the nationals. We now need to up our game to avoid stage fright at the big stage."

Moi Girls’ Kamusinga are the new handball champions following a 25-14 victory over Aboloi in an unbeaten campaign.

“We are back as a school ready to reclaim the national title that was snatched from us in 2019 by Kirandich,” said head coach George Simiyu.

Bungoma’s Bukembe were 7-6 winners against Ebwali in post-match penalties after a barren draw in normal and extra time.

Kiptanui was key as Koyonzo booked a slot at the national championships set for next week in Nakuru County.
Sports
5 months ago

Ototo, coached by Clement Nyakinda, started the game on a high note, winning the first quarter 28-8 and took the second 23-6.
Sports
5 months ago