“I’m actually getting my book out here to give you some inside info,” he says.

• Off-field events were turning the game he loved into the job he didn’t and Erwee’s mental health was suffering.

• The South African Cricketers’ Association employ people to help players work out what to do next in their careers, with sports psychologist Dr Kirsten van Heerden performing that role for the Durban-based Dolphins. 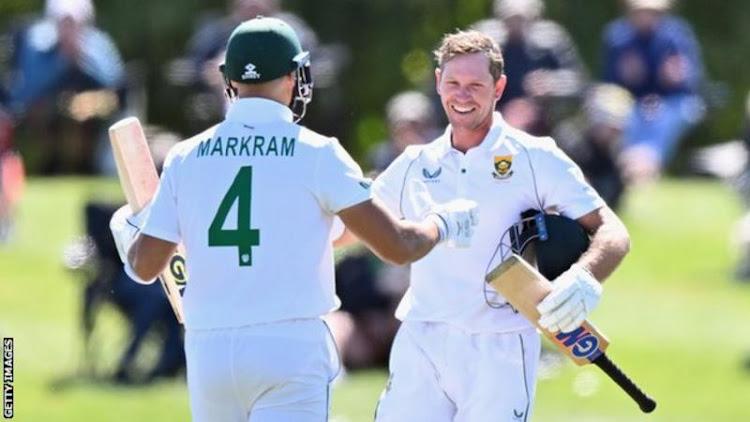 Sarel Erwee (R) during a past match
Image: BBC

South Africa opener Sarel Erwee laughs as he goes through his notes on how to face England bowlers James Anderson and Stuart Board.

“I’m actually getting my book out here to give you some inside info,” he says.

Preparing to face a resurgent England when the first Test starts at Lord’s on Wednesday, the 32-year-old Erwee is on a high that is deserved after a decade of piling on runs in South African domestic cricket. Just over two years ago, this high was unimaginable — Erwee was going to quit.

“It had nothing to do with my stats or feeling I was never going to play for South Africa,” he says. “It was a case of what was going on in my personal life, away from the cricket field that was influencing my energies and mindset.”

Off-field events were turning the game he loved into the job he didn’t and Erwee’s mental health was suffering.

When his domestic side the Dolphins offered him a new contract, Erwee was busy coaching at his old school. Coaching gave him an insight into a future life that, with one phone call, could easily have become his present.

Erwee knew something was wrong, but not how to fix it.

Time passed, but nothing changed, until a “blessing in disguise” arrived in the form of Covid. With the world on pause, Erwee says it allowed him the time to “pluck up my courage and address my mental health.”

He adds: “I made the decision one day that I love my job, but I’m going absolutely hate it if I don’t sort out my personal issues.”

Erwee describes what happened next as “probably the best thing that’s happened” to him.

The South African Cricketers’ Association employ people to help players work out what to do next in their careers, with sports psychologist Dr Kirsten van Heerden performing that role for the Durban-based Dolphins.

“I took a chance, because she’s such an approachable person,” says Erwee. “I sat down with her and started talking.

“That first step, just saying those first couple of words took a hell of a lot of weight off my shoulders.

“I feel like a lot of men, we get into this state where we’re too nervous to talk because of how we’re going to get judged. Mental health gets spoken about a lot in the media, but we get too nervous of how we’ll be judged if we come out and speak to someone.”

In their conversations the two would use sporting analogies rather than official medical terms, a step that Erwee says made the process more accessible and effective. And over time, Erwee’s enjoyment of the game returned.

While it had never been about the runs, those improved alongside Erwee’s health.

In early 2022, over 13 years on from his first-class debut, he was selected for South Africa for the first time. A selection that was the result of leaning on the door until it caved rather than banging it down.

Across his four Test matches so far he averages 30, a respectable return that includes a century away to New Zealand in his second match. It was an innings of particular importance to Erwee as it came in front of his sister and niece, who he had been unable to see in years.

“It was incredible,” he says, “It’s indescribable really unless you’re in that moment. You get overwhelmed with feelings. Even a month after I got home, I was still like, ‘Wow, that actually happened.’”

The emotions that followed for Erwee were a combination of pride, joy, and, ultimately, hunger.

Erwee says he asked himself after his maiden century whether it was something he only wanted to do once.

He adds: “Or is it something you want to do for as long as you possibly can?

“Now I train and I try to get one per cent better every day just so that doesn’t happen just once.

“I’m sure it will happen again, I’m an optimist.”

Test captain Ben Stokes quit one-day internationals in July, while he and England team-mate Jonny Bairstow have opted to miss The Hundred.
Sports
1 month ago