Miller is director for visually impaired bowler Melanie Innes who, along with Robert Barr and his director Sarah Jane Ewing, beat Wales 16-9.

• Miller, who was born in November 1946, had already broken the record for the oldest Scot to compete at the Commonwealths. 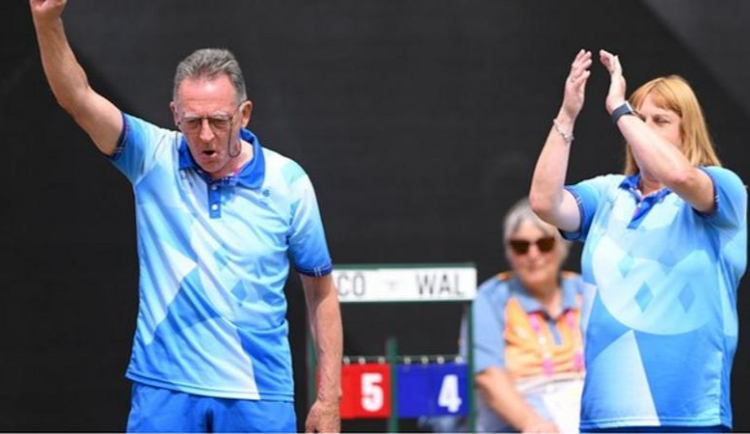 Miller is director for visually impaired bowler Melanie Innes who, along with Robert Barr and his director Sarah Jane Ewing, beat Wales 16-9.

Welshman Gordon Llewellyn - who is also 75 but five months younger than Miller - had to settle for silver along with partner Julie Thomas.

Miller, who was born in November 1946, had already broken the record for the oldest Scot to compete at the Commonwealths.

Llewellyn was born in April 1947. He and his director John Wilson played with Thomas and her director Mark Adams.

Directors were awarded medals for the first time on the Gold Coast four years ago. Prior to that only the bowlers themselves were awarded them.

It is the third successive Games at which Laugher, 27, has won this event, doing so in 2014 and 2018 with the previous partner Chris Mears.

"I think what me and Tony wanted to take from this was that we wanted to get another good performance under our belt. Certainly Tony achieved that. I've still got some things to improve on."

Laugher and Harding topped the standings from their very first dive, but it wasn't until their third dive - a 3.4 difficulty forward two-and-a-half somersaults with two twists in pike - that their dominance began to show.

Their highest score of 88.92 points came on their penultimate dive, the same point at which the Malaysian pair of Chew Yiwei and Ooi Tze Liang - who had been on their heels in second - slipped up, eventually finishing last.

"This is my second international in like two or three years," Harding said.

"The 3m men's in Great Britain is so hard, it's so tough to get on the big stage and I've worked so hard. I've had to be patient, I've had to wait for it. It's thanks to Jack for seeing me in training, seeing how good I can be and trusting in me and believing in me."

Laugher and Harding only made their debut as a partnership at the World Championships in June, taking silver on that occasion.

Their total in Birmingham was higher than Laugher's gold medal-winning totals with Mears at the previous two Commonwealth Games.

Of his partnership with Harding, Laugher said: "We're really good friends and we've got a lot in common. I think our diving styles are very similar.

"He deserves this. He's a great athlete and he's finally got his chance and he's really grabbed a hold of it, and that's something I need in my career - someone with motivation and drive to want to be the best and keep my fire ignited.

"I've been doing this for a long time and having someone new on the scene, raring to go, I think it's really good and I think the synchro partnership is obviously great and we've done some amazing performances this year and I just can't wait for the future."

Kenya's last competitor at the Birmingham 2022 Commonwealth Games, Elizabeth Andiego, was outwitted by Australian Caitlin Anne Parker at the National ...
Sports
1 week ago

Omanyala shook off his World Athletics Championships misfortunes to hurtle to the East African nation's first gold medal in the men's 100 metres ...
Sports
1 week ago

Daim spoke after Kenya's representative in the Birmingham 2022 Commonwealth Games Brian Mutua crashed out after putting up a gallant fight at the Nec ...
Sports
1 week ago

Simiu promises to take the fight to Budapest next year

• The last time Kenya won gold in the event was in the 2002 Commonwealth Games in Manchester courtesy of Wilberforce Talel.
Sports
1 week ago
by BBC
Sports
06 August 2022 - 00:00