Kenya and New Zealand are pitted against Scotland, Australia and South Africa in the group.

• Okumu reiterated the need for the team to capitalise on their speed, cohesion and teamwork to stall New Zealand in today's match. 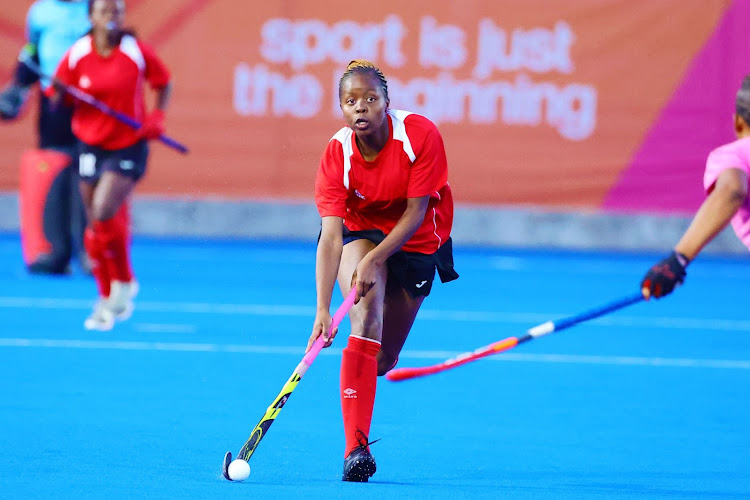 Eleanor Chebet in action during a friendly match against Ghana.
Image: /KELLY AYODI

National women's team captain Gilly Okumu has warned New Zealand that it will not be a walk in the park when they face off in their opening hockey match of the Commonwealth Games in Birmingham.

Okumu reiterated the need for the team to capitalise on their speed, cohesion and teamwork to stall New Zealand in today's match.

Okumu, who turns up for Strathmore Scorpions in the Premier League wants the Jaquiline Mwangi-led team to shake off the underdog tag in Pool 'B', which is been seen as the 'Group of Death.

Kenya and New Zealand are pitted against Scotland, Australia and South Africa in the group.

However, defending champions New Zealand and five-time winners Australia have been tipped to progress to the last four considering their dominance.

"We have the pace to match our opponents. It's about focusing on our weaknesses and using our strength to dominate matches," the experienced midfielder who has enjoyed a professional stint in Germany hinted.

"We have to gel as a team and get our system right. This is our chance to maximize our capability to pull a surprise. Of course, it's the pool of death but it is an amazing opportunity for us and we look forward to playing these teams. We have the belief that we are going to pull a surprise."

Coach Mwangi lauded the spirit in the camp, stating that her charges must be fearless and tackle every game with the right mentality.

"It's good for the girls to gain the required experience from the world's best. We have a few areas  to polish up but the players are in good shape."

Unlike the African Nations Championship in Ghana in January, where the team was purely made of youth, the contingent for the Club Games boasts of experience as Kenya aims to put their best foot forward.

"The team is a blend of experience and youth as we target growth in hockey. We are not an inferior team but we want to leave a lasting legacy in Birmingham."

Kenya tackle Australia on Saturday, Scotland on August 1 and South Africa a day later. Lakers goalkeeper Millicent Adhiambo is likely to start in goal ahead of Quinter Okore. Mbugua Beatrice and Lynn Mumbi will form part of the defence as Eleanor Chebet, Maureen Okumu and Gilly are likely to form the attack.

Rule us out at your own peril, captain Owiti says

Kenya is in Group 'B' which is the 'pool of death' alongside defending champions New Zealand, Australia, Scotland and South Africa.
Sports
1 month ago