GSU throw down gauntlet on Warders to arrest poor run

The perennial rivals renew antagonism in the 'game of the weekend' even as 23 matches have been lined up in the Kenya Volleyball Federation league starting today at Nyayo gymnasium.

• We have dominated them in the past encounters and Sunday would be no different-Tarus.

• The two sides met last month at the same venue but the match was called off because of technicality with the paramilitary side leading 2-0. 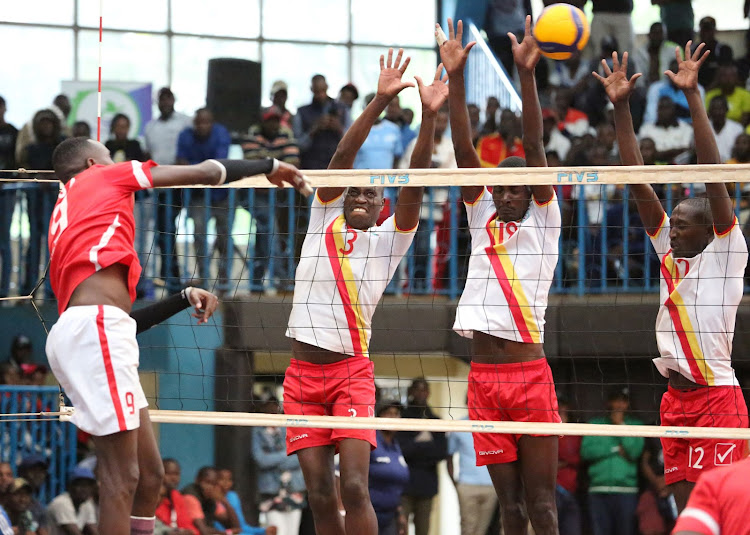 The General Service Unit have dared Kenya Prisons to a fight ahead of the final leg of the Kenya Volleyball Federation national league set for Nyayo Stadium this weekend.

Prisons are winless against the paramilitary side for close to five years and the Ruaraka-based police officers believe they still have the upper hand heading into this weekend's match.

The encounter is the 'game of the weekend' in the 23-match card as the regular season comes to an end.

The two sides met last month at the same venue but the match was unceremoniously called off with the paramilitary side leading 2-0.

"We start over again. We have dominated them in the past and Sunday will be no different," said GSU tactician Gideon Tarus, who doubles up as the national men's coach.

"The Prisons tie is just one of the three matches we look forward to." GSU take on Nairobi Prisons on Thursday and Kenya Forest Service on Saturday.

His counterpart, David Lung'aho, reckons it will be a game of inches but will be banking on their recent form to disarm GSU, who have looked vulnerable recently.

"It is true they have beaten us even when we have been at our best but the trend must stop. The team has peaked up at the right time and if we play with the same desire and energy as we did in the sixth leg, we will make life difficult for them," said Lung'aho.

"We know they have faltered of late and we can heap more misery on them but we'll have to focus on Kenya Army, Administration Police and Central Prisons duels before that."

KPA are assured of a playoff slot and lead the standings with 34 points from 13 matches. GSU and Kenya Prisons, both on 28 points, having played two games less to rank second and third respectively.

Prisons in better shape ahead of decisive period, says Lung'aho

The Warders began the penultimate leg lying sixth on the table and as outsiders to finish in the top four.
Sports
1 month ago

GSU bounce back to winning ways in KVF league

The serial winning tactician added that even though the team had minimised their errors, which saw them humiliated 3-0 by Kenya Ports Authority KPA ...
Sports
1 month ago

KPA face off GSU on Saturday in the top of the table clash billed match of the season.
Sports
1 month ago
by EVANS OUSURU
Sports
30 June 2022 - 05:00
Read The E-Paper