The Hyundai team has Tanak, Neuville and Oliver Solberg who is replacing Sordo for the three-car WRC Safari lineup. 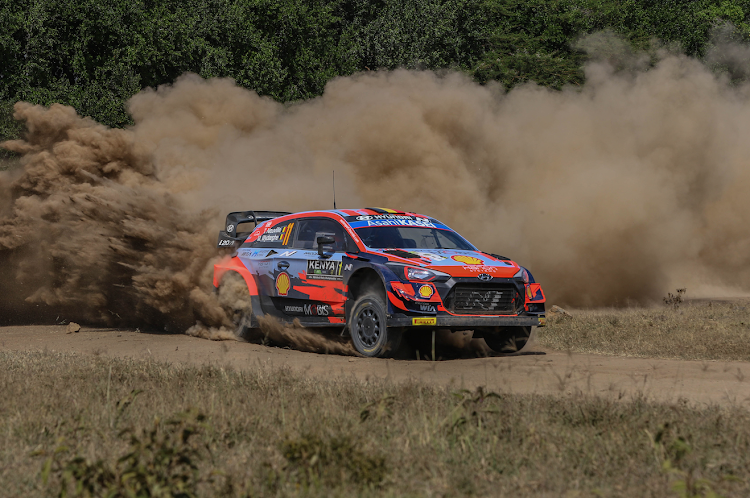 Thierry Neuville of Belgium will be back in the Hyundai i20 Rally 1 in Naivasha later this month.
Image: HANDOUT

Hyundai Motorsports’ deputy team principal Julien Moncet has revealed that his three-car i20 lineup will be going for nothing short of the top spot during the upcoming WRC Safari Rally Kenya.

Hyundai Shell Mobis World Rally Team trio of Ott Tanak, Thierry Neuville, and Oliver Solberg will renew its rivalry with the other two manufacturer teams of Toyota Gazoo Racing and M-sport Ford when the sixth round of the World Rally Championship returns to Great Rift’s Naivasha.

Moncet revealed that WRC Rally Italia Sardegna victory earlier in the month bolstered confidence ahead of next week’s Safari Rally Kenya, adding that the Hyundai i20 Rally 1 should conquer the fabled Kenyan fixture.

Hyundai’s Tänak and Dani Sordo delivered a double podium for the Korean manufacturer in Italy, bringing to an end what had been a tricky start to the 2022 season and the new generation of hybrid-powered Rally 1 cars. The event saw Tanak end a prolonged drought to win the fifth leg in Italy.

With a win on some of the roughest European gravel in the season already done, Moncet is looking forward to next week’s trip to Naivasha.

“What we did in Sardinia was a big relief for all of the team,” Moncet told www.wrc.com, adding: “We know it was a difficult start and we know we were a little bit late with the car, but now we are here.,”

“Yes, we have more to do with the car and probably, we can’t get it all done before Kenya. But in Sardinia, everybody had a competitive car and we know where our car is now.

“We are looking for a strong result in Kenya and It’s what we need to catch back more points to Toyota. We were all very motivated before, but now it’s even stronger. As I said, the start was tough, but nobody gave up. We all stayed motivated and we saw the result of this (in Italy).”

Hyundai is no stranger to the front of the field at Safari Rally Kenya. Last year, Thierry Neuville led for all but two of the first 14 stages before suspension issues halted his i20 last year. Tänak made the podium with third, having been denied his chance of a win when his wipers failed on the final day.

The Alzenau-based team heads to round six of this season’s WRC 39 points behind series leader Toyota in the manufacturers' standings.

The Hyundai team has Tanak, Neuville and Oliver Solberg who is replacing Sordo for the three-car WRC Safari lineup.

The Hyundai team has Tanak, Neuville and Oliver Solberg who is replacing Sordo for the three-car WRC Safari lineup.
Sports
1 week ago

Amina urged the drivers to make the rally historic by putting in exemplary displays since this is the last championship President Uhuru Kenyatta will ...
Sports
1 week ago

Loeb returns as 50 drivers confirm for next week's Safari Rally

•Loeb will be driving in an M-Sport Ford Puma and will renew rivalry with countryman and defending champion Sebastian Ogier
Sports
1 week ago
by REUTERS
Sports
17 June 2022 - 05:00