The gaffer said he could not prevent six players from joining Trail Blazers at the start of the season and the trend might continue unless the management changes tack.

• It is hard for a player to say no when institution teams like Kenya Prisons, GSU or the forces teams come calling because employment is guaranteed-Kirongo.

• Equity made their maiden appearance in the African Club championship last month in Tunisia where they finished 10th. 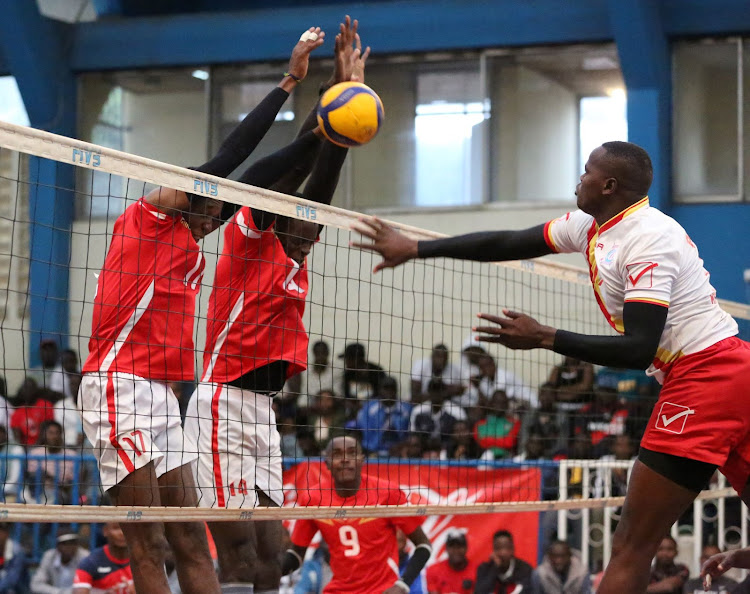 Prisons' Sila Kiptoo and Simon Kimutai up in blocks against Naftali Chumba of GSU in the KVF league match at Nyayo Gymnasium
Image: /ERICK BARASA

Equity Bank men's volleyball coach Sammy Kirongo is pleading with the team's management to offer employment opportunities to players in a bid to stop the exodus of talent to rival clubs.

The gaffer said he could not prevent six of their players from joining Trail Blazers at the start of the season and the trend might continue unless the management changes tack.

"It is hard for a player to say no when institutional teams like Kenya Prisons, GSU, or Kenya Defence Forces teams come calling because employment is guaranteed," Kirongo observed, insisting on security and continuity in the project he is developing.

"We have a young and ambitious team that we would like to keep intact going forward to avoid what transpired last year. This will only be possible if the management employs the players in return."

Equity made their maiden appearance in the African Club Championship last month in Tunisia, where they finished 10th.

The bankers were in a class of their own during the fifth leg of the Kenya Volleyball Federation men's league played last month at Nyayo Gymnasium.

They matched GSU but lost  3-2 in the five-set thriller in what was described as the performance of the season.

"Mentality has changed after the Tunisian experience. There's belief and the mood in training is awesome. It is easy to work with  a disciplined and committed group that already knows what is required of them."

The sixth leg is scheduled for June 23-26 also at Nyayo. Here, Equity have been pitted against Nyanza Prisons, Prisons Kenya, Kenya Army and Central Prisons.

Equity are seventh in the 16-team league with 17 points and maximum points against the aforementioned teams would firmly put  Kirongo's charges in contention for a playoff slot.

"We want to take one game at a time and we cannot underrate any of our opponents. We just want to win our matches.  Hopefully, we can alter the form-book this year by earning a playoff slot."

Kirongo also hinted at extending his scouting network to tap the raw talent in overlooked areas like Kajiado, Turkana, West Pokot and Samburu. "Talent is in the grassroots and we can get tall players from these regions."

The top 14 teams have between five and seven games to go while tail-enders Vihiga and Central Prisons have 10 matches each to play.
Sports
3 weeks ago

Mulinge wants the country to focus on nurturing more talent

Three tours have been held so far—Homa Bay, Wote, and Mombasa—as the federation seek to popularise the game that is becoming a hotbed of young talent.
Sports
2 months ago
by EVANS OUSURU
Sports
15 June 2022 - 05:00