Uncertainty surrounds Malkia's trip to Brazil with the government still mum on the facilitation of the team.

• The 33-year-old Kenya Commercial Bank outside hitter said the South American trip will help the technical bench rectify their mistakes ahead of the global event.

• Malkia are expected to leave for Brazil on June 18 but the trip still hangs in balance at the moment. 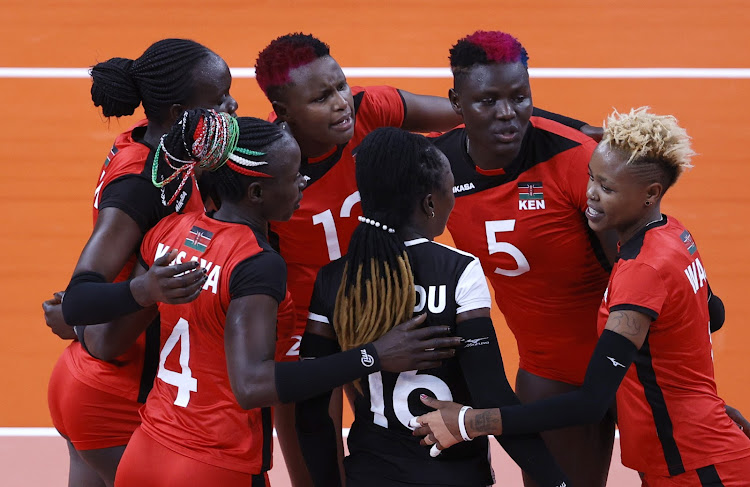 Sharon Kiprono of Kenya celebrates with teammates after scoring a point against South Korea
Image: REUTERS

The 33-year-old Kenya Commercial Bank outside hitter said the South American trip will help the technical bench rectify their mistakes ahead of the global event.

The seasoned hard-hitting attacker said the trip will also help junior players remove flaws in their game and build confidence ahead of the Poland competition.

"This is the second chance we have been granted by the Federation International de Volleyball (FIVB) and we can't afford to miss out. We failed last year because of the pandemic and we played in Tokyo without any build-up match. We call on the government to support the team so that we can head to Brazil and prepare well for the World Championships," Moim pointed out.

Uncertainty surrounds Malkia's trip to Brazil with the government still mum on the facilitation of the team.

Malkia are expected to leave for Brazil on June 18 but the trip still hangs in balance at the moment.

"This is a team for the future. The talent pool of between 17 and 23 will get to know the missing elements in their game. With the best structures in Brazil and the occasion to hone their skills under Brazilian coaches, the future looks bright for the Malkia with 2024 Paris Olympics just two years away."

The form Kenya Prisons players, who also had professional stints in Azerbaijan and Thailand added: "Our coaches will have time to observe what Brazilians are doing differently, the equipment that we can purchase and the technical and tactical approaches to matches. Maybe tomorrow we might not travel but with the equipment, we can work on our own."

Moim spoke on Saturday during a press briefing at Kivi Milimani Hotel, Nairobi. The maverick attacker said the World Championship will help unearth more talent and improve the country's performance.

"Fingers crossed. The world show will help us discover another Moim or Wacu. I would like to see players step up and become dependable."

The quadrennial event will jointly be co-hosted by the Netherlands and Poland from September 23 to October 15. Malkia Queens are in Pool 'A' together with Italy, Netherlands, Belgium, Puerto Rico and Cameroon.

Kenya are in the Pool 'A' alongside continental rivals Cameroon, Belgium and Puerto Rico.
Sports
5 months ago

The 18-year old handed the bankers the title with a decisive attack to break Al Ahly's hearts after going toe to toe in the deciding set
Sports
6 months ago
Post a comment
by EVANS OUSURU
Sports
14 June 2022 - 05:00
Read The E-Paper