The women's top-tier league took a break as the national team continued with Commonwealth Games preparations.

• Sailors lost 2-1 to Butali after containing them in the first half after intense pressure. Butali capitalised on sailors' poor strategy in the second half to bag all the points. 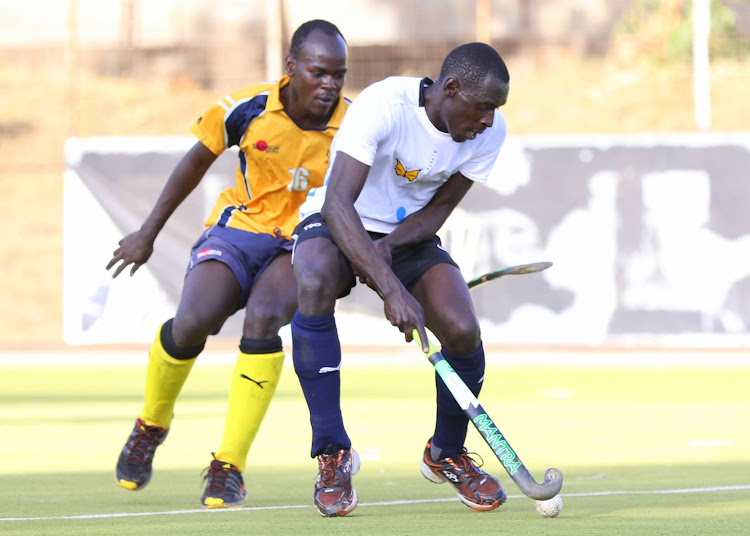 Sailors' Moses Omamo shields the ball from Willsmith Ngare in a past match
Image: FILE

Sailors coach Timothy Kamar wants his charges to stick to pre-match instructions in order to maintain the flow of the game.

Sailors lost 2-1 to Butali after containing them in the first half after intense pressure. Butali capitalised on sailors' poor strategy in the second half to bag all the points.

"We were competitive but we shifted away from our approach. We lost our balance, put ourselves under pressure, and conceded easy goals," he said.

He added: "We have to work as a team and play for the badge. Maintaining our identity is what we need to spend much time on."

Following the weekend results, Butali regained the top spot after starting the weekend in second place. Captained by Constant Wakhura, Butali have 20 points from eight matches and play Wazalendo before the end of the first leg.

Kenya Police dropped to second with 19 points from the same number of matches as Strathmore Gladiators moved third. The varsity side humiliated Wazalendo 4-1  to move to 13 points. Wazalendo (13), Sailors(11), USIU-A Mashujaa (11), and Western Jaguars (7) follow in that order.

Tail-enders, Mombasa Sports Club have only managed one point in nine matches. They face a monumental task to maintain their top-flight status with results heading southwards. Greensharks occupy the eighth position with Parkroad Badgers just below them.

The women's top-tier league took a break as the national team continued with Commonwealth Games preparations.

In the men's Super League, Sikh Union opened a four-point gap at the top of the 12-team league. The Forest Road-based side have 28 points while second-placed Kenya College of Accountancy University have mustered 24. KCA have also widened the gap on Kenyatta University to nine points. KU are third with 15 points.

The varsity side made light work of Wazalendo with Nicholas Muchiti giving Meshack Senge's charges a second-minute lead.
Sports
5 months ago

The varsity side failed to garner maximum points in five previous attempts, managing just one point.
Sports
6 months ago