•The team lost 79-34 to  Italy in the quarter finals and will play Turkey in a position five and six ranking game at Ginasio Vasco Da Gama sports gym.

•They lost 101-20 to the US and 114-31 to Lithuania but qualified for the finals because only eight teams took part in the competition. 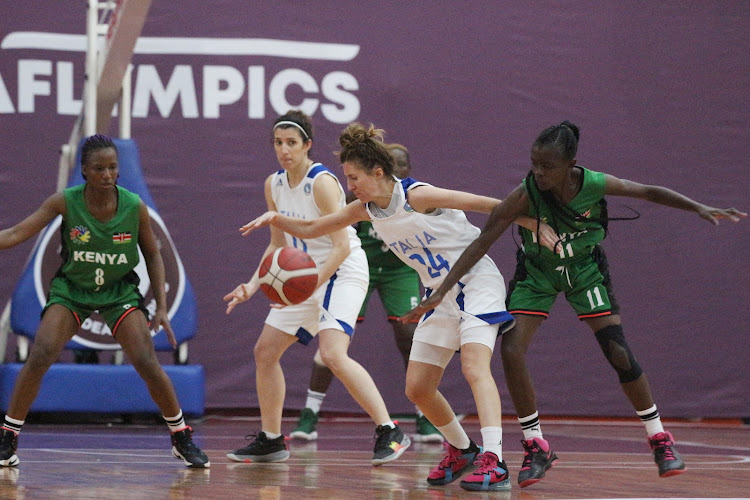 Action between Kenya and Italy in the quarter finals
Image: ANGWENYI GICHANA

Kenya national women’s deaf basketball team coach Mary Chepkoi wants the side exposed more if they are to compete with other nations on the big stage.

Chepkoi said the team can be a force to reckon with as long as they are well prepared. The team lost 79-34 to  Italy in the quarter-finals and will play Turkey in a position five and six ranking games at Ginasio Vasco Da Gama sports gym. Turkey lost 60-52 to Poland in the other quarterfinals game. Kenya had earlier lost 97-28 in their opening game.

The team has lost all their five matches in their second appearance at the Deaflympic Games after making their debut in Samsun, Turkey in 2017.

They lost 101-20 to the US and 114-31 to Lithuania but qualified for the finals because only eight teams took part in the competition.

“We need to play more intense games against top teams. I am sure the only way we can improve is by engaging in a number of friendly matches," said Chepkoi.

The coach rued poor finishing but added that the team had shown improvement in the games played so far.

“Poor conversion rate has been our major undoing in the competition. We are improving and I’m looking forward to a better show in the next two games,” she added.

Meanwhile, Kenya's top deaf golfer Isaac Makokha remains in contention for a medal in the ongoing 24th Deaflympics in Caxias Do Sul, Brazil despite exiting in the semi-finals.

He will be up against Guldan Nico of Germany in the bronze medal playoff at Caxias Golf Club. He lost to German John Allen, a world champion and a double Deaflympics champion.

In the quarter-finals, the VetLab Club's golfer eliminated Nielsen Lasse.

Team Kenya golf head coach Vincent Wang'ombe admitted that the semis were tough. “He gave his best but the German player performed better. We lost the match but we still have a chance to win bronze,” said Wang’ombe.

Makokha said the competition attracted a much tougher field than the last edition in Samsun, Turkey.  “This competition has very strong participants and I have learnt some lessons from it,” said Makokha in an interview.

Kenya’s other representative Adan Wario dropped out due to an injury while Gilbert Alikula was eliminated after finishing 18th.