Kenya bags first medals in the 24th Deaflympics in Brazil

Kenya clinched silver and bronze in the women's 10, 000m

•Sera Wangari won Kenya’s first medal, a silver in 10, 000m on Sunday morning in a race which was won by Loundes Ponce Juarez  from  Mxco while Grancy Kendagor settled for bronze.

•Another Kenyan in the race Winn Bugosi did not finish the race due to the blistering pace and cold weather. 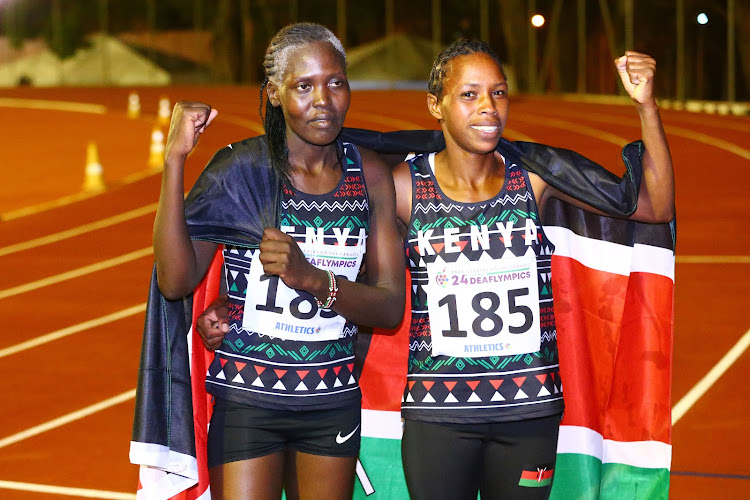 Wangari placed second in the 10,000m on  Sunday morning in a race that was won by Loundes Ponce Juarez from  Mexico with another Kenyan Grancy Kendagor settling for bronze.

Another Kenyan in the race Winn Bugosi failed to finish the race due to weather conditions.

"I started well and led almost all the laps, but I slowed down towards the end. I think I got exhausted in the final lap. my finishing power was weak," said Wangari.

Wangari said she was happy with her position considering the tough competition in the race.

"I feel I really tried my best. I really worked to get this silver. I was totally worn out in the final lap but my spirit kept telling me I could do it and so  I held on to the tape," Wangari stated.

Wangari said her main goal in the games was to finish within the medal bracket, a feat she finally achieved.

"I wanted to ensure I have something to show when I return home and I am happy I did it. It was my first time competing in such cold weather, It made my knees weak, but I kept on assuring myself that I have a goal to achieve and I'm glad I did it," she said," she said.

Buoyed by the silver medal,  Wangari is now optimistic about another podium finish when she runs in the women's 5000m this Saturday.

"I strongly believe I can get gold in the coming race because it's much shorter than today's 10, 000m," she said.

Kandagor revealed they had planned for 1-2-3 things went south after she fell and Bugosi' opted out.

"The fall affected my momentum, I really tried to pick up myself but I could not get back to my initial rhythm. Nonetheless, I'm happy with the bronze," Kandagor said.

Head coach Samuel Kibet reiterated that the Kenyan contingent had planned for a podium sweet but unfortunately things did not go their way.

"Our best girl Grancy was destined for gold unfortunately she fell, but Wangari took up the challenge to give us silver. "To me, it's a good performance since it's the first time that Kenya is getting medals in long-distance in the women's category,” said the coach.

He added: "I think that my girls put up a good show against a pool of strong competitors. I'm glad that we have finally opened the medals hunt in this  Deaflympics. I'm confident the remaining categories, especially athletics, will have good performances in the coming days," Kibet said.

The coach revealed that David Wamira was out of the men's 100m final which was slated later on Sunday after developing a muscle pull.