"Defensive discipline was lacking and that's why we conceded a needless penalty. Players were slow in decision-making," said Senge.

•Gladiators took a surprise lead through Brian Nyabuto, who evaded his marker to round off goalkeeper Dontoh Simon in the fifth minute.

• Meanwhile, Kenya Police recovered from their 4-1 and 1-0 losses against Exchequers and Strathmore Gladiators respectively to humiliate USIU-A Mashujaa 4-1. 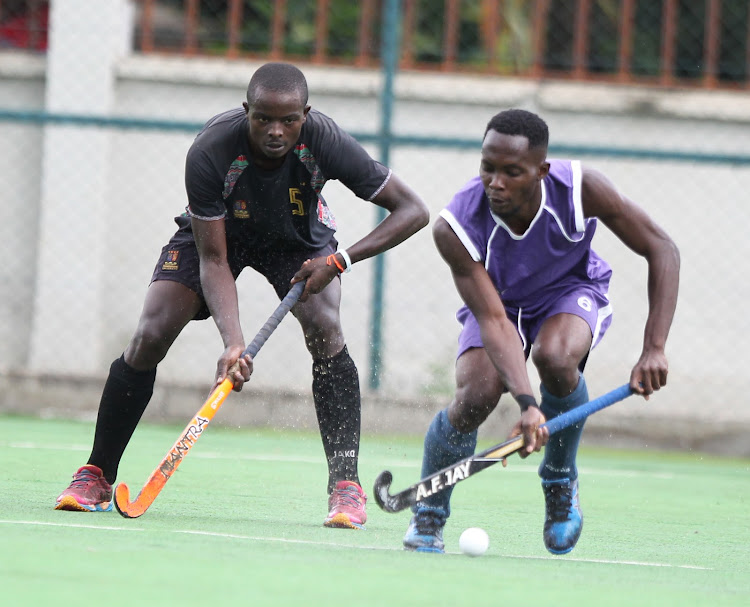 Strathmore's Meshack Senge has decried the team's lack of defensive discipline as they fell 4-2 to Exchequers of Ghana at the ongoing Gold Cup club invitational tournament at the Dashmesh Hockey Stadium, Nairobi, on Monday.

"Defensive discipline was lacking and that's why we conceded a needless penalty. Players were slow in decision-making," said Senge.

"There were moments we could have scored but the final pass really let us down. The individual mistakes also disadvantaged us."

"Exchequers are more experienced and punished us for our mistakes. However, this tournament gives us the opportunity to work on our weaknesses. We live to fight another day but the experience is awesome."

He went on: "The keeper did a good job. The midfield lost it and was a bit off colour. Positioning wasn't good enough but the defeat is a learning experience for this new team."

Gladiators took a surprise lead through Brian Nyabuto, who evaded his marker to round off goalkeeper Dontoh Simon in the fifth minute.

The lead was, however, short-lived as the Ghanaians drew back to level terms two minutes later via captain Akaba Elikem's goal.

Elikem went on to score a hattrick, becoming the top scorer so far with six goals.

His second and third goals came in the 24th and 51st minutes. Noel Lormotum made it 3-2 for the students in the 54th minute as Strathmore played with urgency and conviction but Nortey Ebenezer silenced the handful of Kenyan supporters with Exchequers' fourth goal, four minutes from time.

Elikem scored for the third game in a row for Exchequers. Basil Wafula was denied from the penalty spot by Exchequers goalkeeper Simon.

"This was a real test for us since we came here (Kenya). Strathmore's style of play is similar to ours. They are more tactical than physical as opposed to both Kenya Police and USIU-A Mashujaa," Richmond Attipo, the Exchequers coach observed.

"So far so good because we have won all our matches. This is good exposure for the team which is a blend of youth and experience. We are rebuilding because all our players went to serve in the military."

Meanwhile, Kenya Police recovered from their 4-1 and 1-0 losses against Exchequers and Strathmore Gladiators respectively to humiliate USIU-A Mashujaa 4-1. Calvins Oriema gave the law enforcers the lead in the second quarter, scoring in the 22nd minute.

Kennedy Sibweche and Brian Saina scored quick-fire goals in the 34th and 36th minutes to hand the former national champions a 3-0 advantage. Jose Baraka pulled one for Mashujaa but Oliver Echenje put the result to bed with a 58th-minute goal.

Captain Samson Ratia scored the all-important goal in the 30th minute to give the John Kabuu coached side maximum points in the week - long ...
Sports
2 weeks ago

Gladiators recovered from their 1-0 loss to USIU-A Mashujaa on Saturday to record their first win in the seven-day competition.
Sports
2 weeks ago
by EVANS ANAKUR
Sports
03 May 2022 - 05:00