The Deaflympics will be co-hosted by Caxias Do Sul and the neighbouring cities of Farroupilha and Flores da Cunha.

• The women’s football team will make their debut at the Deaflympics where they are scheduled to face Poland, Japan, the United States and hosts Brazil in a round-robin format. 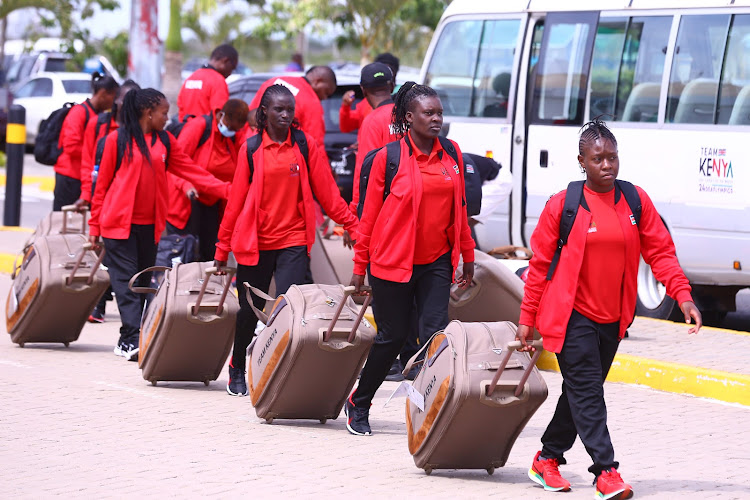 The national women's football team arrives at the airport on Monday
Image: HANDOUT

The first batch of Team Kenya to the 24th Summer Deaflympics jetted out of the country Monday evening for Caxias Do Sul, Brazil.

The Deaflympics will be co-hosted by Caxias Do Sul and the neighbouring cities of Farroupilha and Flores da Cunha.

The national women’s deaf team were the first to leave the country at 6 pm for the South American country ahead of the two-week extravaganza between May 1 and 15.

The women’s football team will make their debut at the Deaflympics where they are scheduled to face Poland, Japan, the United States and hosts Brazil in a round-robin format.

Head coach Ben Bela and captain Emily Adhiambo called on Kenyans to support them despite being underdogs.

Speaking at the airport, the two promised to give a good show.

"The team is 80 percent ready. For the three weeks we have been in camp, the players have really pushed themselves. We have very good players and I believe by the time we play our first match, we will be ready to go," said Bela.

"The government has facilitated a good number of days for us to acclimatise while in Brazil. I believe a week is enough to be in good shape and ready to tackle Japan in our first match on May 3. We are going to this tournament as underdogs but my team is well prepared and I believe we will compete and post good results."

Adhiambo added: "We will be in Brazil for about a week before we start our matches. I feel we will adapt well to the weather."

The Flamingo Deaf Women’s football club midfielder added: “The coach selected the strongest team and we have also been training hard in camp so we expect to play well against our opponents. I have been encouraging the team to focus on wins only. We expect to win a medal.”

The team will open their campaign against Japan on May 3 before taking on hosts Brazil in the second match a day later.

They will then clash with Poland and the US on May 7 and 9 respectively.

The team needs to win two games to be in the medal bracket.

Captain and point guard Calvin Musalia, 38, who was in the team that represented Kenya in the 2013 and 2017 Deaflympics, says Kenya will field a ...
Sports
3 months ago

Team captain Joel Kiilu said their target in Brazil is a podium finish.
Sports
3 months ago

Buoyant Team Kenya to depart next week for Deaflypics in Brazil