How Odibets is Transforming lives of ordinary Kenyans

• Odibets under their Odimtaani kitting programme has kitted more than 10,000 teams with football jerseys in the country in a bid to nurture untapped talent in the field of soccer.

• Another sports personality who benefitted from Odibets hand of gold is sprint sensation Ferdinand Omanyala was gifted a brand-new car by the betting firm as a reward for breaking the African 100 metres record at the Kip Keino Classic. 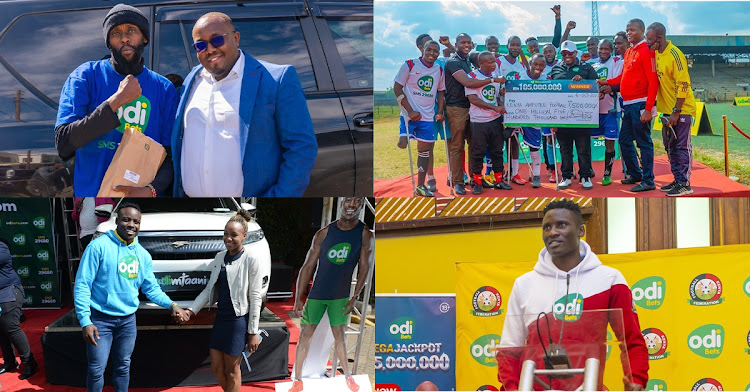 Odibets had initiatives touching on the lives of ordinary mwananchi.
Image: ODIBETS

For many companies in Kenya, corporate social responsibility (CSR) has become an essential part of the organization’s growth.

CSR creates brand love among consumers and the latter can easily associate with such companies.

Consumers have tended to lean towards brands that support and give back to society.

One of the brands that stood out in Kenya in 2021 for its CSR was Odibets.

The betting firm had initiatives touching on the lives of ordinary mwananchi.

The initiatives ranged from paying medical bills, supporting raw talent and tapping them as their brand ambassadors and even financially boosting the national team. Here is a list of the initiatives by Odibets;

Last year, Harambee Stars goalkeeper Patrick Matasi and his family were involved in a grisly road accident and were hospitalized.

While Matasi and two other relatives were discharged from the hospital a few days after the accident, his wife and son remained admitted as they had to undergo foot and shoulder surgeries respectively.

Matasi resorted to putting up a paybill number appealing to Kenyans to help him offset the medical bill. Through their Odimtaani initiative, Odibets partnered with Kenyan international footballer Michael Olunga’s foundation and helped clear Matasi’s bill which included that of his family members.

Another beneficiary from Odibet's heart of gold is former Harambee stars playmaker Ezekiel Otuoma who was diagnosed with Motor Neurone Disease.

After several hospital visits Ezekiel's family set up a medical funds drive in a bid to raise money for his treatment.

Through their Odimtaani initiative, Odibets funded his full treatment of Sh1.5 million in Germany, providing air tickets worth Sh300,000 for him and his wife, and a further Sh200,000 to support the wife’s business.

At the same time, popular Kenyan MC John Maina a.k.a Fullstop took to social media to highlight his plight as he had been diagnosed with a rare lung infection that had rendered him bedridden.

The MC had asked Kenyans to come to his aid as his bill had sky-rocketed, Odibets through their Odimtaani cleared his bill that had accumulated to half a million.

Odibets under their Odimtaani kitting programme has kitted more than 10,000 teams with football jerseys in the country in a bid to nurture untapped talent in the field of soccer.

According to Odibet’s marketing manager Aggrey Sayi, the betting firm was to kit more than 30,000 teams from across the country and so far, the kitting programme has been a success as its impact has been felt all over the country.

“Teams at the grassroots level had been struggling to get kits and training equipment’s thus we decided to launch the kitting programme thus we were able to actualize the dreams of the various talented players in the country,” said Aggrey Sayi at a previous event.

Last year, the Kenya Amputee football team received a financial boost of Sh1.5 million from Odibets after their dreams of participating in the 2022 Amputee Football World Cup qualifiers were almost shattered due to financial constraints.

"As the saying goes, Disability is not inability, we decided to come through for the Kenya Amputee football team as they are people like us and through our help, they'll be able to participate at the World Cup qualifiers in Tanzania thus they'll be able to have a sense of belonging in the society like any other sportsmen and women in the society," said Odibets General manager Dedan Mungai as he handed the cheque to the Amputee team.

Last week, Odibets came through for Edward Murimi, a street juggler whose video went viral worldwide on the internet.

Edward’s passion while handling the ball awed football fans thus betting firm Odibets decided to offer him an ambassadorial job and also shoot and advert with him.

Another sports personality who benefitted from Odibets hand of gold is sprint sensation Ferdinand Omanyala was gifted a brand-new car by the betting firm as a reward for breaking the African 100 metres record at the Kip Keino Classic.