GSU continue to pull away from rivals in tug of war

Winning trophies is ingrained in the culture of the law enforcers who are heads and shoulders above their competitors in the sport and have dominated it for decades.

•Their success has been aided by teamwork, discipline, physical fitness and support from the senior ranks 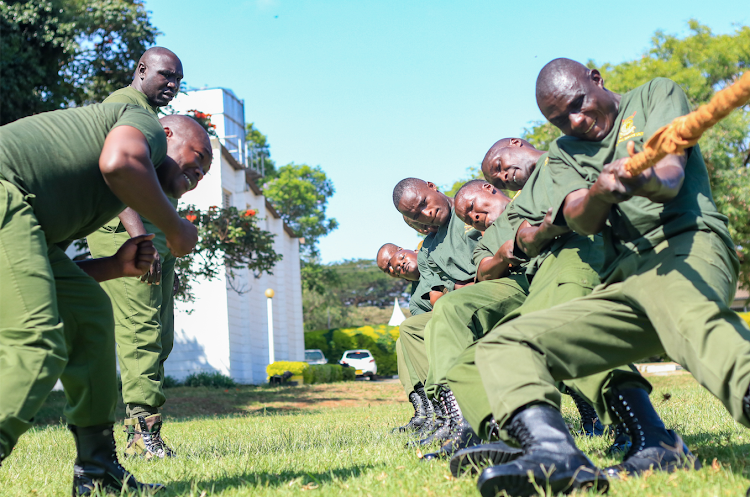 Members of GSU's tug of war team in a training under the instructions of team manager Dennis Steki as coach Patrick Omollo watches on.
Image: WILFRED NYANGARESI

The General Service Unit tug of war team head to Kisumu this weekend for the ultimate leg of the Kenya Tug of War Association (KETWA) national league.

The annual competition brings together teams from other disciplined forces as well as those from county governments and assemblies from around the country.

The law enforcers are head and shoulders above their competitors and are expected to easily retain the league title, which they have held for over a decade.

To outsiders, this is an impressive record and evidence of the giant stature the team hold in as far as tug of war is concerned. However, to the law enforcers, their dominance is no surprise considering the central place the sport occupies within the force.

Winning trophies is ingrained in the team's culture such that a loss is often a painful pill to swallow. A case in point was in 2013 when they lost the National Police Service Inter-police championships to Rift Valley Province, which took quite some time to recover from.

"That was the worst moment for me. We had always dominated the championships. In the aftermath, everyone kept asking if we had really lost the title to Rift Valley because they could not believe it. Even though we won the KETWA league in the same year, we still could not get over our loss in the Inter-police championships because that was the most important trophy for us," the team's coach Patrick Omollo recalls.

As one of the longest serving members of the team, it is understandable for Omollo to be irked by that loss, considering he was used to lifting trophies ever since he joined in 2009. 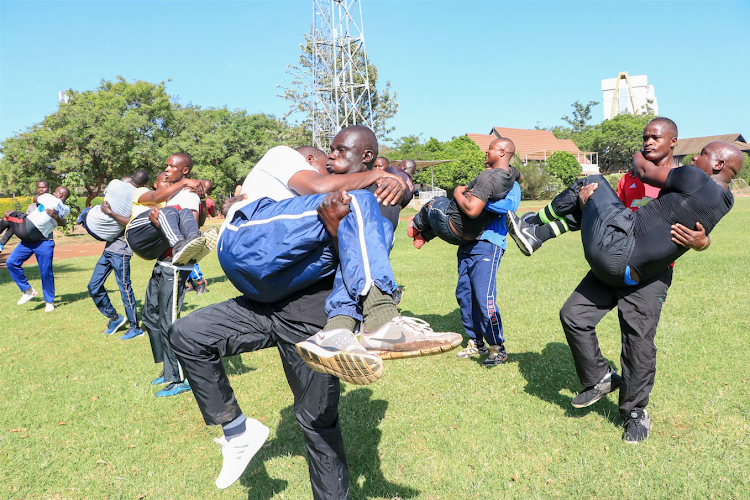 Indeed, his best moment is 12 years ago when he joined GSU as the youngest and lightest player.

Since they joined the league in 1995, GSU had won it consecutively until 2010 as was the case with the Inter-Police title, until eight years ago, when their unbeaten streak was broken.

They are also the defending champions of the East African Inter-Police Championships, which they won in 2019 after defeating Tanzania.

Omollo's progression from playing to coaching is the dream of many sportspersons and was largely enabled by the tacticians he played under.

"I was identified by the then coach Ekasiba during the inter-companies championships and he trained me as a young man to improve on my skills. Afterwards, Kennedy Keter took over in 2010 and he pushed us to be the best. He left in 2015 and that is when I was elevated to the coaching position," he says.

As the big man at the helm of the team, he has now been entrusted with more responsibilities upon his broad shoulders, chief of which is to inculcate new blood in the team and ensure GSU maintain their grip on the crown in the country and East Africa.

One of those who have recently joined the team is skipper Robert Kiptum, who could not resist the allure of featuring for the giants of tug of war.

"I joined the club in 2017 when I was selected from the field companies. I was motivated by the way they do their things, their determination and winning culture," Rotino says.

It has been a blissful journey for Rotino, who admits he has enjoyed the fruits of tugging at the rope in pursuit of excellence.

"Through this game I have added a few more coins in my pocket because when you win, there are usually cash prizes. I also like the fact that it builds teamwork and enables us to see each other as equals regardless of who you are," he explains.

"You need to be disciplined as a player and always willing to work with others. You must be willing to listen to the coach's instructions and follow them to the letter." 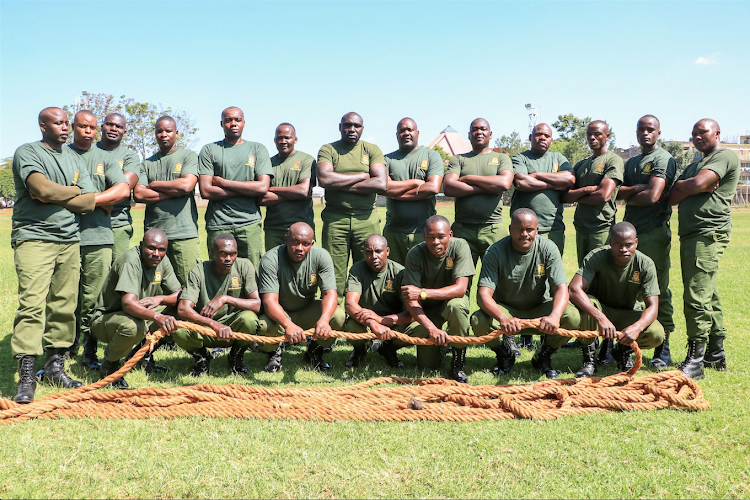 The captain's sentiments resonate with Omollo, who adds that a coach plays a proactive role during the game, much unlike other sports where a tactician must stay within a designated area.

"Tug of war is a game of instructions and obedience to commands. When your coach says hold...don't move, all the players are expected to do that. When he tells you to stand up and pull then you must do that. You must also look at what the other team is doing to identify their mistakes and capitalise on them," he explains.

Omollo goes ahead and lets out more secrets of tug of war.

"Endurance is what will win you a contest and not the strength to pull your opponent. If you watched our game against Kenya Navy, you can see that they gave up after they saw that we had more stamina and were ready to endure for longer," he explains.

"Tug of war is more of a defensive sport than offensive, much like boxing. You have to be agile enough to pick yourself from the ground when you fall and you must also be very strong."

Team manager Dennis Steki picks up from here and expounds: "When you come to tug of war, you must be ready to suffer physically and work hard."

"You must be fit and this means diligently training, spending as much time in the gym and undertaking your runs. The most important physical attribute is stamina and so you need to work on perfecting all parts of your body," Steki says.

Despite the physical pain one must endure, the two men are quick to add that tug of war is an enjoyable sport with a lot of benefits.

Omollo says the team, above all, is a family where they stand for and with one another at all times.

"The sport requires a lot of teamwork and this extends to outside the pitch. We are one unit such that, if one of us is affected in one way, we all come together to help out. It also teaches you patience and to endure through the tribulations of life," he says.

Throughout the 13 years he has participated in the sport, Steki testifies of the major returns he has harvested from tug of war.

"It is very painful...yes, but it  is also very enjoyable. It allows you to always keep physically fit and remain in the right frame of mind. When you go to championships where there is a tug of war competition, you will always find crowds congregating around as opposed to other games, such as football," Steki expounds.

He has fallen in love with the sport so much that his desire is to see his children take after him and surpass the levels he has reached.

"Of course, if you are a sportsperson, your desire is to see your children follow in your footsteps. It is a fun game and I also wish people outside here could adopt it," he says.

On Omollo's part, he believes the game should be introduced in schools to tap talents at a young age.

"We should be having tug of war right from primary school. Most people discovered their talents in disciplined forces after spending most of their lives playing other sports. There's also the National Youth Service where there's a lot of talent who can be tapped," he says.

Personally, he has already planted the seeds of the sport in his ancestral roots  in Opoda, Bondo sub-county by sponsoring an annual tournament in honour of his late mother. 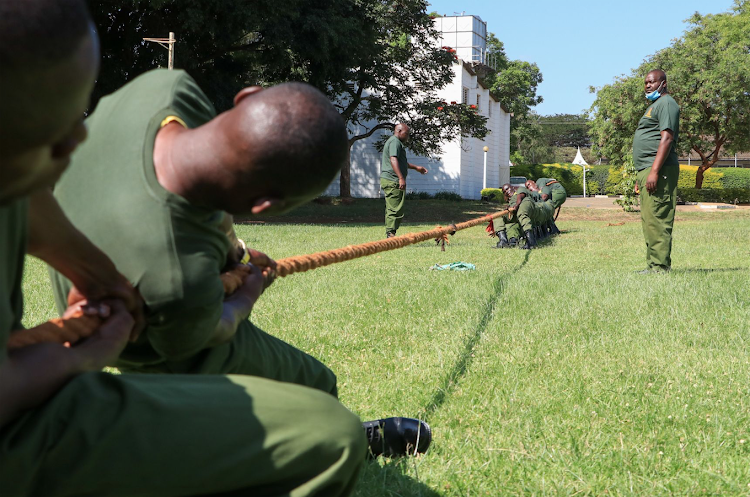 Not to forget, Omollo is quick to acknowledge support from the senior ranks of the force who have facilitated their needs consistently.

"They have ever been supportive of our efforts and are always encouraging us. They have given us opportunities to travel and compete in various events. As we head to Kisumu, the boss has called us and wished us all the best," he reveals.

With GSU's top management as their anchor, the team can look forward to many more years of sailing through their opponents to reach uncharted territories.

This will only be possible if they remain true to the principle of pulling together — in the spirit of teamwork — and not pulling apart in search of individual brilliance.

As skipper Rotino says in his parting shot: "There is no secret to success... just teamwork and discipline and to enjoy yourself."

With this kind of determination, who shall pull GSU away from their hold on the throne? If indeed wristwatches and wall-clocks can speak, then time will tell.